A Dundas resident enters the world of citizen engagement by trying to save a tree. 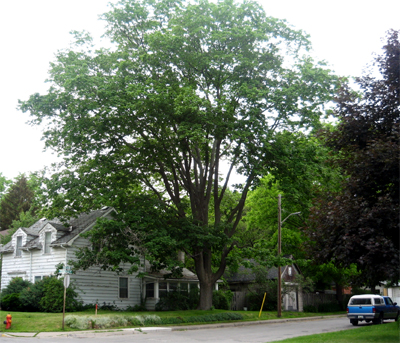 It happened very suddenly (and was totally unexpected) when were informed that an enormous, healthy maple that has spread cool shade over our home for almost 100 summers was facing imminent destruction.

The reason? Hamilton's urban trees are afforded almost no protection at this time, and the owners of the property have demolition and construction plans that will fatally injure the roots of this giant. They had never considered any options that would save the tree because they were not required to. Next Wednesday, out come the axes.

This is a difficult situation for a neighbour, and I was initially torn. Should I make a big fuss to try and save the tree (success is very unlikely) and antagonize the couple in question? We'd never speak again, I'm sure.

Do I do what I think is right? Or do I quietly go about my business, and try not to be shocked and sickened the day the tree comes down and our street changes forever (and our summer energy costs begin to skyrocket)?

Much to my husband's horror (he tends to take the future view - we'll have to live beside these people for a very, very long time) I have chosen to raise a fuss. A civilized, democratic fuss, but a fuss nonetheless. I am not even sure that we have a 20 percent chance of saving this splendid organism, but damn it, I'm going to try (without spiking the tree and without chaining myself to it).

So I contacted Art Samson, our City Councillor. He hasn't offered much hope, saying there's only so much we can do within the law. That's not quite good enough for me, but it's better than an outright "No" (maybe it IS an outright "No", I'm not sure).

I've also been in touch with various city departments in an effort to determine if Dundas' tree protection bylaw (4513-99) would apply. No one seems to know for sure. I had wondered aloud to Mr. Samson whether it would be possible to pass a small amendment to the existing bylaw adding another neighbourhood to the list of those in which trees cannot be cut without a permit. The response wasn't very encouraging.

Nevertheless, I still have five working days, and I intend to explore every avenue.

I'm also spurred on by the fact that Hamilton has a tough tree protection bylaw in the pipe. Its wording is similar to Toronto's 2004 rules, which require permits for the cutting of all large trees on private property.

This sounds just like another developer-friendly hoop, but permits are not issued for the removal of healthy trees. It's expected that these new regulations will come to pass some time in 2007.

It's killing me that but for a year or so (a blink of an eye in the potential lifespan of this tree) this lovely, lovely shade-giving giant will vanish.

It's not right. And I'm going to do what I can to stop it.

Maggie Fox lives and works in Dundas. Co-owner of a small custom publications firm specializing in print and web content, she's new to the activist game, and hopes she can make a positive difference in her neighbourhood.


Was the tree saved?

Just to let you know that the "City of Hamilton Act" states that all by-laws of the former towns or cities will be recognized by the new City until the new City repeals it with a new Bylaw. So your Dundas Bylaw is still legal! This was the Act passed by the Prov. to almalgamate the Regionof Hamilton-Wentworth.