This remarkable documentary explores the damage caused to both the abused woman and her abusive partner by his acts of violence.

On May 12, 1982, Margaret Mitchell, NDP MP for Vancouver East, asked the Trudeau government to take action to protect battered women - the term back in the day for gendered violence. Mitchell stated, "One in ten Canadian husbands beat their wives regularly." That's as far as she got before Tory laughter and heckling filled the room, making it impossible to hear the Honourable Member.

Clearly audible on some tapes of the incident is a Tory member saying, "I don't beat my wife. Do you, George?" This was representative of how men viewed the issue of spousal abuse or intimate partner violence as it's now known.

We have made great strides from that distressing display of privileged white male entitlement in our House of Commons. On the other hand, we still have a very long way to go. Today, our Parliament is still predominantly androcentric and agonizingly slow at advancing women's equality.

That's a real social problem because gender-based violence is among the most pervasive human rights violations in the world. The United Nations defines violence against women as:

Any act of gender-based violence that results in, or is likely to result in, physical, sexual or psychological harm or suffering to women, including threats of such acts, coercion or arbitrary deprivation of liberty, whether occurring in public or in private life.

These numbers increase significantly for women experiencing multiple oppressions including identifying as being a woman of colour, an immigrant, Indigenous, or having disabilities.

Abuse crosses all cultures, races, ethnic groups, religions, ages, sexual orientations, educational backgrounds and income levels. It's well documented that over time the abuse escalates in frequency and severity. This is especially true of physical violence. Abuse has nothing to do with love and everything to do with power and control.

Life circumstances that make it impossible for women to leave include no room at the women's shelter, no job or reliable income, a lack of affordable housing and child care, and death threats.

How can society encourage men who have used violence to get help? How can society effectively respond to violence against boys in order to break intergenerational cycles of violence? And, what role do male allies play in eradicating gendered violence? These are all important issues, but the question remains, where to start?

How about with a dialogue over coffee? But, not just any coffee. How about a woman having coffee with her former abusive partner and filming it for all the world to witness and learn from? That's exactly what Attiya Khan did.

The film A Better Man opens with Attiya meeting Steve for coffee 22 years after she literally ran for her life and never looked back. 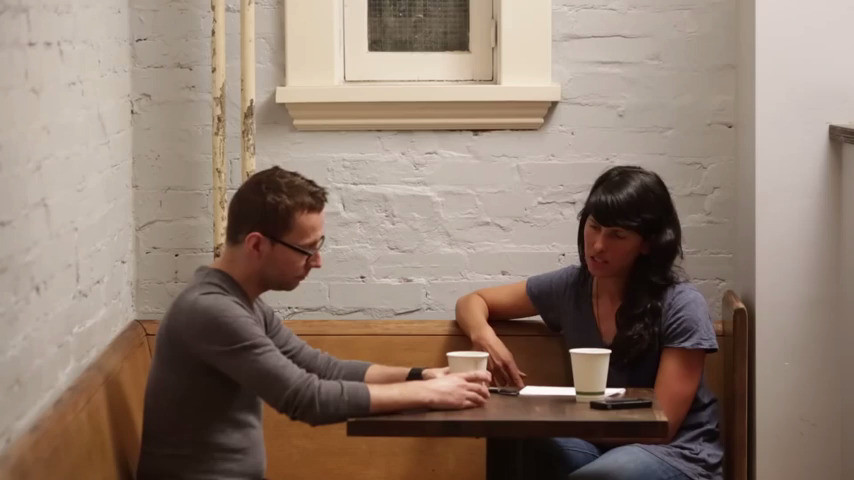 Still from A Better Man

Alliya was 16 when she met 18 year old Steve. By all accounts their first date was the most happy, amazing day they spent together. In recalling the day, Steve tells Alliya that by the end of their date, "I knew I had to be with you." For anyone with an understanding of, or experience with, gendered violence that is a very crucial warning signal.

For Attiya, the beautiful experience was eclipsed when abuse entered the relationship within the first couple of weeks of dating. The abuse continued throughout the entire two long years they lived together.

A Better Man explores the damage caused to both the abused woman and her abusive partner by his acts of violence. Attiya made this radical documentary because, "I desperately want domestic violence to stop. Art, storytelling, and deep, painful conversations are an integral part of the solution. By getting closer to the truth of what survivors experience, and of why men choose to use violence, we can help stop the violence."

Perhaps more intriguing is why Steve would even agree to participate in such a revealing project. According to Steve, "If I could help even one man not choose violence, then it would be worth it." Steve also claimed he wanted to take the opportunity to help both Attiya and himself heal.

Augusta-Scott asked Steve to look honestly at the abuse he inflicted. In haltingly re-telling his story, Steve described the typical cycle of abuse. He claimed the kinds of abuse he inflicted are always on his mind, yet has tremendous difficulty recalling specific events and owning up to the scope and magnitude of his violence against Attiya.

Steve genuinely feels regret and guilt for using violence in our relationship. He's incredibly honest when it comes to remembering and not remembering details from our past. When we first sat down to talk, he remembered very little. It became clear to me that he had never discussed the violence he used against me with anyone. It makes sense to me how someone would want to bury deep the terrible things they've done to someone. As the film progresses and we discuss our past more deeply, he begins to remember more, and he acknowledges the truth of my own memories.

Even when he is able to recall events, Steve had a very hard time verbalizing them and we later learn that Attiya often had different, more startling versions of horrifically violent events. To his credit, Steve was able to acknowledge that he's not happy that he made Attiya afraid. In reality, Attiya was terrified the entire time they were together.

Even though Steve does not remember much at times, simply being able to express myself to him was huge. It felt so powerful and satisfying to tell him exactly what he had done to me, and to watch him listen and accept my memories of his violence without trying to qualify them

I expressed to Steve early on that sitting down together and discussing his use of violence was actually helping me heal and that I felt empowered by our conversations. We were both surprised to learn that this film has the potential not only to help others, but also to help me.

During a joint counselling session with Augusta-Scott, Attiya admitted that when she lived with Steve she believed her situation to be so hopeless that it would just be a matter of time before he killed her.

Steve acknowledged her fear and hurt. Meanwhile, Attiya admitted in private that she felt unable to show her true anger because she was afraid Steve would leave and not finish the reconciliation process.

I believe Steve has owned up about his use of violence against me. What I wanted more than anything was the chance to let Steve know what he had done to me. I needed him to hear how the pain he inflicted on me has stayed with me.

Owning up means being accountable. Being accountable includes listening, not blaming the person you harmed, not minimizing the abuse and committing to a process of change - all of which Steve has done. He admits to his use of violence. Even now, Steve recognizes that I may have more to say to him. I know that if I ever need to talk with him at any point in the future, he will make himself available.

Steve could have turned down my offer of talking about our past relationship in detail. Agreeing to these conversations on camera is another level of owning up that most people, I believe, would never do.

Steve believes the violence he experienced in his life before meeting Attiya contributed to his violent tendencies. He admitted that he just couldn't let the violence go. This declaration makes clear that violence against boys and intergenerational violence really need to be addressed in a meaningful way if gendered violence is to be eradicated.

We learn nothing about Steve's life over the past two decades. In contrast, we learn quite a bit about Attiya's life and healing journey. In fact, we're invited to accompany her husband and son while they hand out white ribbons to men leaving their local arena. The White Ribbon Campaign is an initiative designed to raise awareness about violence against women and to encourage men and boys to become allies working towards its elimination.

A Better Man lays bare the cycle of violence that women trapped in abusive relationships face daily. It also shows how abusers isolate their partners and control every aspect of their lives in order to exert their power and control creating a situation where their partners know that whether they stay or leave they are likely to be killed by the man they love.

The film does a great job of calling out teachers, neighbours, and friends who knew the abuse was going on, yet failed to take action or call for help. Thank goodness Attiya had one good friend who helped her make the final break permanent.

Attiya is a unique woman. She is ever hopeful. In fact, Attiya has faith that: "There is more to Steve than his past use of violence against me. People who use violence are capable of love and tenderness. People who use violence can be accountable and repair some of the harms they created. This does not excuse the violence, but acknowledges that people are complex beings with many emotions."

Yet, Attiya is realistic.

Change does not happen overnight. When it comes to using violence, it takes a lot of time to work towards living a violence-free life. But it can happen. It does happen. There are many therapists, programs, and organizations including Bridges Institute in Halifax, Changing Ways in London, New Directions in Ottawa, Evolve in Winnipeg, and Counterpoint here in Toronto, whose mandate is to help people who have hurt others learn how to have healthy relationships.

Congratulations Attiya on moving closer to the end of your healing journey and for creating a loving, meaningful, impactful life for yourself and your family. And, thank you for making an important film that opens multiple dialogues on the once ridiculed reality of gendered violence.

You can watch the trailer here:

This article was first published on rabble.ca.