In The Netherlands, the kind of rat-running that killed Jasmin Hanif has been systematically eliminated from almost every residential street in the entire country.

On May 16, Jasmin Hanif was crushed and killed by a car driver in Waterdown. She was 10 years old. The car driver was a rat-running "cut through" car driver who had no business driving a car in front of Jasmin's home on Evans Road.

To quote from the Hamilton Spectator article:

Evans, in particular, is a traffic problem because it sits on the edge of Waterdown and often becomes a thoroughfare for drivers speeding between Dundas Street and Parkside Drive...

Travelling through Waterdown is not part of the EDR (emergency detour route). Drivers are supposed to take Highway 6, across Highway 5 and then back down to Highway 52.

However, Martin White, the city's manager of traffic operations and engineering, said the city can't control where people drive.

On Roxborough Avenue near Queen Mary Elementary School, there is one example of a street from which the City of Hamilton has eliminated rat-running car drivers. This is what is called a "traffic filter" as it filters out motor vehicle traffic while allowing pedestrian and cycling traffic to pass. 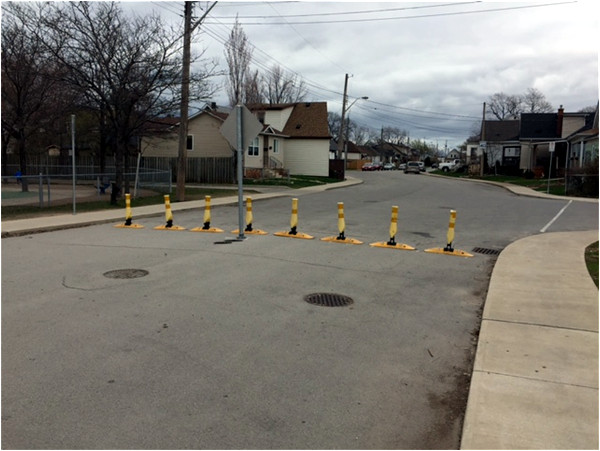 This exact same treatment could have been applied to Evans Road, where it would have saved the life of ten-year-old Jasmin Hanif.

In The Netherlands, rat-running has been systematically eliminated from almost every residential street in the entire country. This is part of the Sustainable Safety [PDF] program for street safety.

Here is an article and video that describe how this works. Key quote from the article: "Residential streets in The Netherlands rarely work as through roads for cars, even if they were originally designed to do so."

In the 1970s, roads in The Netherlands had the same disease of car domination that Hamilton suffers from today. As the country recovered from WWII, more and more cars made Dutch streets less and less safe. In 1972, a total of 3,264 people were killed in traffic crashes. In 1973, no less than 450 road deaths were of children.

1973 was also the year in which the child advocacy group "Stop de Kindermoord" (Stop the Child Murder) was formed.

The result has been a steadily declining death toll in spite of a steadily increasing population. 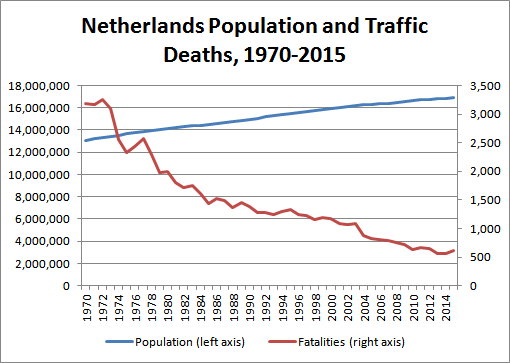 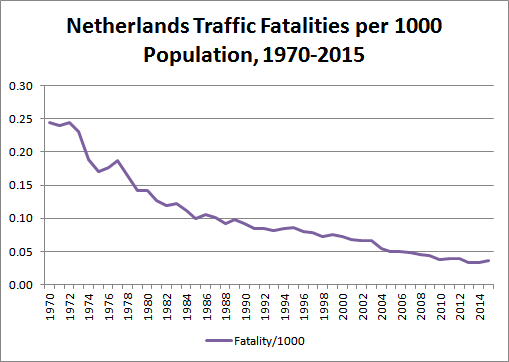 This is in spite of the fact that the average age at which Dutch children travel unaccompanied to school is 8.6 years old.

If Jasmin Hanif lived in The Netherlands, she would almost surely be alive today - alive because Dutch cities do not tolerate the rat-running car driving that killed her.

Until the City of Hamilton chooses to exercise its power to follow the Dutch example of systematically eliminating rat-running, children such as Jasmin are going to continue to die.

So let's stop killing children. Let's eliminate rat-running car drivers on residential streets. Every Dutch city has done just that. We can too!

I live between Main and King and would love to see one of these at the end of the street. I noticed that many streets around me have had speed humps installed (ours did not, so I hope this does not lead to more rat runners choosing our street), however a traffic filter would have been a much more effective option. From what I see, those who live on our street are not the ones that need to be slowed down, it is those just passing through. In our case, the LRT should somewhat serve as a traffic filter, as it will only allow traffic on and off King from the East-bound lane.

As I type this the city is installing speed bumps on Herkimer. I had polled neighbors about getting speed bumps over ten years ago and to my surprise no one was interested. Maybe the difference is the ongoing advocacy and education in this city - or just new neighbors? Either way I'm happy about it.

What a coincidence! I was just riding home with groceries and saw the speed hump being installed on Herkimer between Dundurn and Locke. I presume we were looking at the same installation.

Streeter, its not showing on the Functional Road Classification in the Official Plan as an arterial or a collector; so it has to be a local road designation. From my understanding, local roads are where speed bumps are allowed. As well as collectors such as Herkimer is.

Jesus, only you would get more offended about the term "rat running" than the fact that a little girl was killed trying to cross her street because we care more about making it easy to drive than we care about making streets safe. Get stuffed.

It doesn't matter why the driver was rat running. And no-one is saying the driver is at fault. The point of the article is to encourage the elimination of short cuts through residential streets. If we don't, drivers will always find an excuse to rat run and they will suffer the consequences of the inevitable injuries as much as the residents.

More importantly, Evans Road is not a residential road. It's a rural road that has always been a main connecting road between Parkside and Dundas, and people have decided to put some houses on it. I'm not saying "it's their own fault", but they can't be surprised when it gets backed up or busy during highway closures.

This is an important point. There is a difference between a street being 'busy' and being unsafe for vulnerable street users (i.e. pedestrians and cyclists).

A quiet street that becomes busy can hurt the quality of life for residents (more noise, more pollution), but a more serious concern is when excessive speed or high traffic volumes make the street dangerous for pedestrians and cyclists. For example, maybe there is insufficient lighting, no sidewalks or no safe crosswalks.

In this case the issue seems to have been cut through traffic (due to the congestion on the 403) combined with insufficient infrastructure for pedestrian safety (no crosswalks, no lighting) on a street that has both more residents and more traffic than it used to. Apparently, the City is trying to address some of these concerns.

There is demand for complete and safer streets in Waterdown, just like there is all over the City. The push for complete streets and traffic calming may have begun in wards1-3, but it is growing everywhere.

Everyone wants traffic to be calm and safe where they live, but they often still want to drive fast and easily through other people's neighbourhoods.

And arterial streets can be made complete streets as well: wider sidewalks with buffers, protected bike lanes, safe pedestrian crossings at each intersection. The problem is that Hamilton's arterial streets are too often designed like quiet side streets (but with four or five lanes of traffic): narrow sidewalks with no buffers and multiple blocks with no safe crosswalks.

Unfortunately, Councillor Ferguson is confused about the difference between a "busy" street and a "safe" (or complete) street.

Maybe you shouldn't complain about heavy traffic if you decide to live on an arterial street. But that doesn't mean the street can't be complete: i.e. safe and convenient for all street users. Indeed, Ancaster has a generalized 40 km/h speed limit, and introduced elements of complete streets on Wilson Street, which is arterial.

The term "rat running" is well-established and means the practices of taking a side street rather than an arterial street to avoid congestion. I've never seen anyone interpret it as an offensive term! The West End of Vancouver cut off several block intersections in the 1970s to avoid rat-running (cut-through traffic) in the 1970s ... and it was very successful.

The incident in Waterdown was not typical rat running, since it didn't occur in an urban area, but it did involve motorists taking a non-arterial road to avoid congestion on main roads (or freeways in this case).

Residential/non-residential streets is a problematic term in urban areas since almost all streets are residential (someone lives on them).

It is especially used in the UK:

There are lots of words in the dictionary that are offensive or are used offensively. People should not be compared to rats, or scabs, or cockroaches etc. etc.

We can agree to refer to this behaviour as "cut-through traffic" as a less emotive term.

When the behaviour kills children, I prefer to use a more emotive term.