All in all, an engaging evening of theatre with clever scenic design, lighting and beautiful costumes enhancing the music and song.

For Hamilton's Hammer Entertainment to undertake an ambitious project is no new thing. However, even the stalwarts at Hammer must have braced themselves before deciding to tackle Andrew Lloyd-Webber's "Sunset Blvd. The Musical," known, as it has been, for its opulent sets, costumes and props - to say nothing of the sheer size of the cast, complex dance numbers and the mammoth technical demands involved. 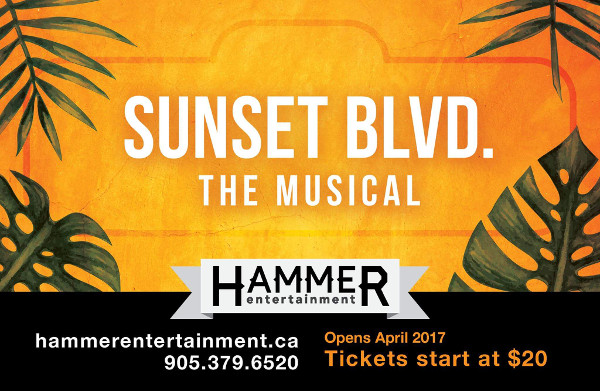 Hammer may have been heartened or even inspired by this year's Broadway revival, which streamlined all that opulence in favour of simpler set designs, only suggesting the grandeur of the original 1993-94 productions.

And tackle it they have, with all the resources at their command. Their streamlined set evokes the right ambience and overrides the limitations of the Citadel Theatre. Tim Koetting provides workmanlike direction and keeps things pleasingly in motion.

While the chorus is used well in shifting the scenic elements, the excision of the dance numbers is regrettable. However, there are winning voices to be found both in the lead roles and the chorus. And they succeed in creating some memorable moments in the process.

Most of us are probably familiar with the plot, drawn from one of the most well known films of the 20th century. For the uninitiated: Norma Desmond, tragic silent movie queen, faded into obscurity in her gloomy palatial mansion meets down-on-his luck screenwriter Joe Gillis. He's the perfect person to aid in her comeback by helping with the script for "Salome" she's been scribbling for years.

Add in Norma's devoted butler, along with wide-eyed novice screenwriter/love interest Betty Schaefer, and throw in C.B. DeMille, some agents, repo men and the whole gaggle of stars and starlets at Paramount studios and you've got all the requisite fodder for screen (or stage) magic.

Shari Vandermolen gives us a Norma Desmond we haven't quite seen before. Familiar with the 1950 celluloid version (or numerous subsequent send-ups), we may expect a deluded and demented diva, her madness only vaguely veiled with the last remnants of self control.

But Vandermolen gives us a new take on this legendary dame of fiction. Grande-dame? Yes, Vandermolen brings this aspect to her portrayal, but there lurks beneath this veneer a veritable lost child, shrouded in grief and fear.

It evokes a pitiable sweetness in a character that's usually played more for shock value than sympathy. Narcissism is also in her arsenal and she gives it to us complete with gestures. But this Norma knows how to wring the heart.

The conceit of funeral preparations for the star's pet monkey could well bring gasps and laughs. But Vandermolen's performance of "Surrender" engendered a good deal of sniffling and dabbing of the eyes among audience members. This while singing to a tiny plush-toy monkey. That's an achievement for any performer.

Her rendition of some of the first act numbers are delivered with smoky, cabaret chanteuse stylings. However her handling of Act Two's "As if We Never Said Goodbye" leaves no doubt that this lady can belt out a ballad in full-throated musical theatre style as well.

As Joe Gillis, Jason Dick has no trouble finding the character's glib and hard-boiled exterior. However he loses some of his hard edge when conned by Norma's sob-stories and this quick transformation doesn't quite ring true to his earlier characterization. And while he displays vocal power in his solos, he sometimes drowns out his partners in duets.

The real surprise of the evening comes from Stacy Ann Milford as Betty Schaefer. She absolutely wakes this production up with the freshness and energy she brings to the role, and to the play as a whole. While the character was, of course conceived to provide contrast to the tragic and dour Norma, Milford infuses her performance with such luminous effervescence and bright-eyed zest that it becomes hard to look at anyone else while she is onstage.

While it would be easy to fall into the trap of making Betty a perky pain in the ass or goody two shoes, Milford eschews a naive approach and delivers something quite special and very real. Whether speaking or singing, her vitality and naturalness draw us in completely, imbuing song and speech with warmth and gusto.

Deserving of special mention are Trevor Verduyn as Joe's agent Sheldrake, and Christopher Sweet as Joe's buddy Artie. Both are possessed of strong voices and are ripe for larger future roles.

The chorus have some fine moments as they warm up over the course of the evening, with the mini-chorus of beauticians particularly standing out in "Eternal Youth".

All in all, an engaging evening of theatre with clever scenic design, lighting and beautiful costumes enhancing the music and song.