As you prepare to vote again on the LRT project in Hamilton, please consider the ideas, concerns, and expectations of residents as outlined in the attached collection of Hamilton Light Rail Citizen Statements. 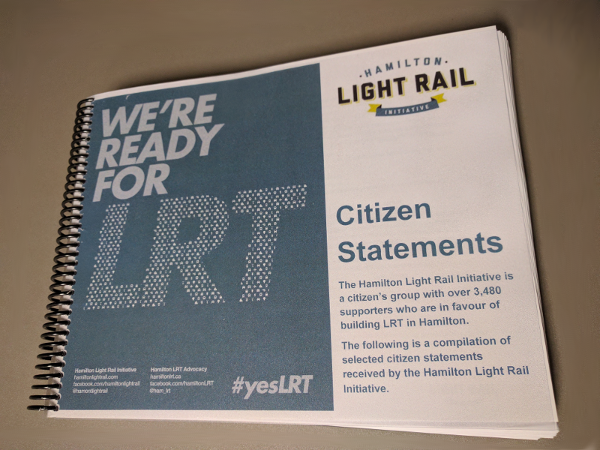 The Hamilton Light Rail Initiative has over 3,480 supporters, many of whom have submitted statements on why they are in favour of the LRT project for Hamilton. The attached comments are only a selection of the statements received, but they represent supporters from across the amalgamated City of Hamilton, young and old, long-time residents and newcomers.

While the statements are diverse, they all share a passionate belief in the City of Hamilton, its future and promise, with LRT as a major opportunity for the community. Many residents can not believe this once-in-a-generation project is being threatened. Others feel deeply betrayed that the literally thousands of hours of citizen time and millions of dollars of municipal money are potentially being wasted.

Your vote at City Council is not just for or against the LRT project. It is for or against thousands of citizens who have time and again expressed their unreserved support for this critical project.

We ask that you review the document and to use it to inform your discussions and your decisions at this very critical time for Hamilton.

Please learn to use complete sentences and new lines.

If you had a point, I never can find it.

Not everyone has the same language abilities. I don't think you should discourage others from expressing their opinions because you have difficulty reading them. There are a myriad of reasons someone might not be able to put thoughts to paper in the English language to your standards.