A lively story performed by a valiant cast is complicated by the inexplicable choice to narrate the entire play with its stage directions. 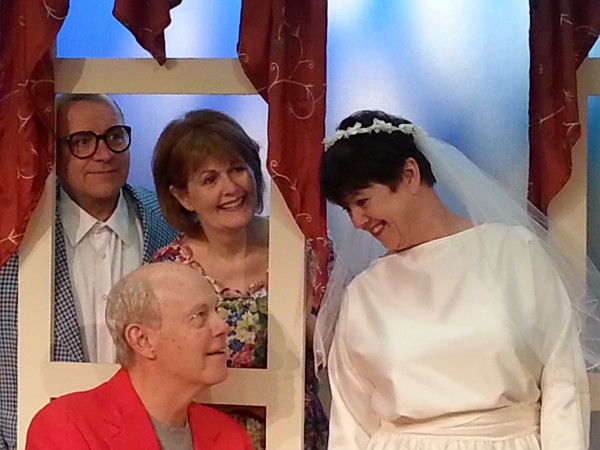 "Everybody touches other people's lives in mysterious ways they may not even be aware of. Look we're all connected here, right? So something we do, something we say, maybe just the way we are will create echoes, resonances in others.."

This quote, sounding rather like a concise synopsis of "Six Degrees of Separation," is actually drawn from Bernard Slade's 1989 comedy "Return Engagements".

The plot concerns itself with the lives of nine disparate characters staying at a Stratford, Ontario guest house at various points over a thirty year span. And the excerpt above might lead one to expect a well crafted work that weaves essential and elemental truths into its whimsical content.

But appearances can deceive as there is more of froth than fabric to this tale of intersecting lives. At best, this work could have emerged as a sweet little pastiche about the debatable charms of infidelity. However, in the hands of director Tom Levely its fate is quite different.

Bernard Slade, a native of St. Catharines, Ontario gained fame as the author of the acclaimed "Same Time, Next Year", a work of infinitely greater substance. "Return Engagements" is essentially an expansion of the previous work (minus the novelty and sparkle) which smacks of the author gratuitously riffing on the same motif ad nauseam.

Prior to his Broadway fame, Slade had enjoyed a successful career as a writer for TV's "Bewitched", as well as bearing the dubious honour of creating "The Flying Nun" and "The Partridge Family". But unlike sitcoms, plays do not come with laugh tracks.

Sadly, this production does come with a narration. And although I'm sure that Mr. Slade never intended his written stage directions to be spoken over a live production, that's exactly the inexplicable choice made by Mr. Levely. That's right, all of the stage directions are read aloud by an unseen narrator via microphone. Scratching your head in disbelief? So was I.

Surely an experienced director like Levely would know better than to defeat the entire purpose of acting by superimposing this intrusive play-by-play of what we are already looking at. The continuous voice overs drain energy from the stage, and worse, they prevent a smooth flow in the action, making it impossible for the actors to fully breathe lives into their characters.

What of action, reaction, motivation and characterization in such a scenario? They get cut off before they can fully develop. The overall effect is somewhat akin to a sighted person watching a television channel with described video for the blind.

One empathizes with the performers who are valiantly giving it their all. And we do get some nice moments from the cast, particularly when they have the chance to speak long enough to avoid interruption by the disembodied raconteur.

Doug Gowland as a young bellhop makes you forget he's actually a distinguished elder statesman of local theatre by managing to infuse the character with wide-eyed charm and boyish pluck. Later as an allegedly acid-tongued critic, he's a little too likeable. As a young carpenter, Joey Nobleman displays an easy going charisma. Later, as a flaky dentist he verges on slapstick.

With a talented cast like this giving it all they've got, of course you'll want to like this production. And some winning set and lighting design also go far in making a pretty picture. But oh, those voice overs! They truly impede the proceedings, diverting the actors energy as they pose in tableau, or hijacking their focus as they're forced to cautiously concentrate on making their movements sync with the narration.

In his program notes, director Levely states: "Let our experienced actors tell the stories of our characters". What happened between writing the notes and staging the play with a narrator telling all the stories? In those same notes, he also invites the audience to close its eyes "and think of our offering as a radio play where you have to visually imagine everything". These mixed messages imply an ambiguous vision.

Did the director feel his cast were incapable of conveying the sentiments in the script? Or did he think the audience incapable of grasping the content without a blow-by-blow rundown of the action as it occurs? Only you can decide.