There was opposition to their project as well. But as the project progressed, they overcame it. Now it is close to completion.

I would like to take this opportunity to update you on my visit to the Waterloo Region's LRT open this past Saturday.

As I arrived at the LRT's maintenance and storage facility in Waterloo, I could not help but be impressed by the crowd of more than 1,000 people who lined up to see the LRT car and inspect the first LRT car firsthand. There were literally people of all ages on hand, from small children to seniors. 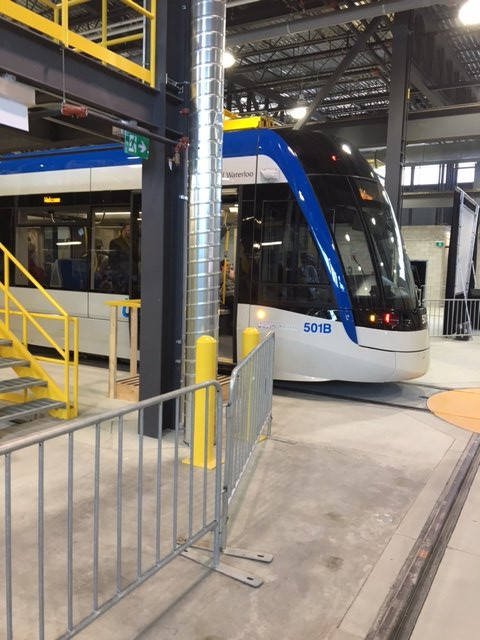 I was greeted at the open house by Ken Seiling, Waterloo Region's chair. He explained to me that Waterloo Region has branded its LRT with the name ION. GrandLinq is the Region's public-private partner, which will design, build, finance, operate and maintain ION over the next 30 years. 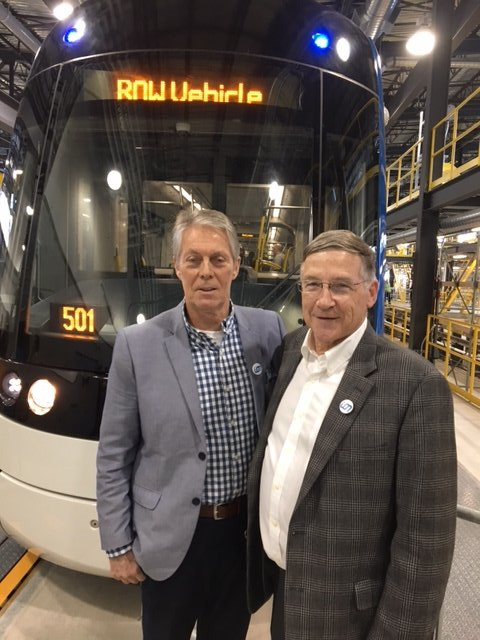 The capital cost of their LRT is $818 million and is funded by three levels of government: the Government of Ontario ($300 million), the Government of Canada ($265 million) and the Region of Waterloo ($253 million).

In other words, local tax payers are contributing directly to the capital cost of the project. As you know, this is in contrast to Hamilton's LRT project, which is being funded 100 per cent by the Province.

It should come as no surprise that the very first thing any public official from Waterloo says to someone like me, from Hamilton, is how on earth did we convince the Province to pick up the entire capital cost of our project. I have to tell you, it is said with more than a little envy.

The LRT car itself is quite impressive, and - yes - it has that new car smell. It was made in Thunder Bay by Bombardier, and the balance of the 14 cars will be made in Kingston and delivered before the end of this year.

It is longer than any street bus or streetcar, and is articulated in five segments. It can carry more than 200 people, and because it is not in traffic, the LRT comes frequently, with predictable regularity, so line ups of passengers will be cleared quickly.

By the way, the LRT fare will be fully integrated with Waterloo's transit system. That is, passengers will pay the same fare whether they take a bus or an LRT, and transfers are free.

I was pleased to meet Tom Galloway, an elected councillor who is their chair of planning and public works committee.

An operator has been selected, Keolis, which is partnered with GrandLinq, and they are currently hiring. An operating agreement is in place, with an annual operating cost of $8 million per year.

However, Tom, an accountant by training, said he is not at all concerned about what the operating costs land at, because the LRT is already generating increased revenue through assessment growth and development charges resulting from new residential and commercial development all along the route. 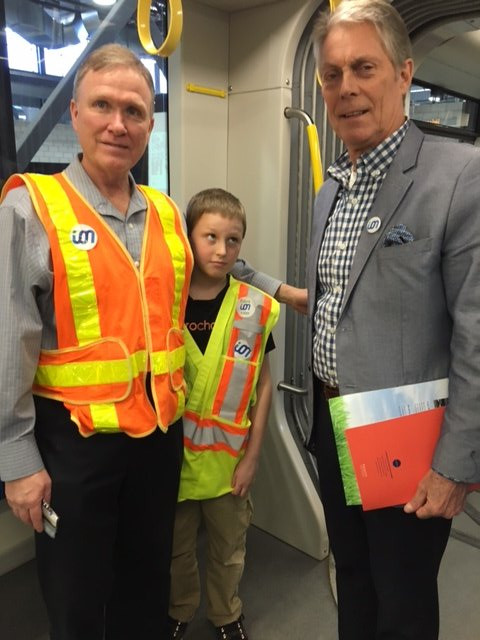 I took the time to speak to several people who were in line to see the car. Some of them were LRT skeptics in the beginning but were turned into supporters based on the cost-benefit case. Even Tom confessed to be an early LRT skeptic but was convinced purely on the numbers. He is now their council's political lead on the project.

After the open house I drove the entire 19-kilometre length of the LRT route from Waterloo to the south part of Kitchener. Much of the track is already completed, although there is a stretch in downtown Kitchener that is still being worked on. I got out of my car several times to take a close look. 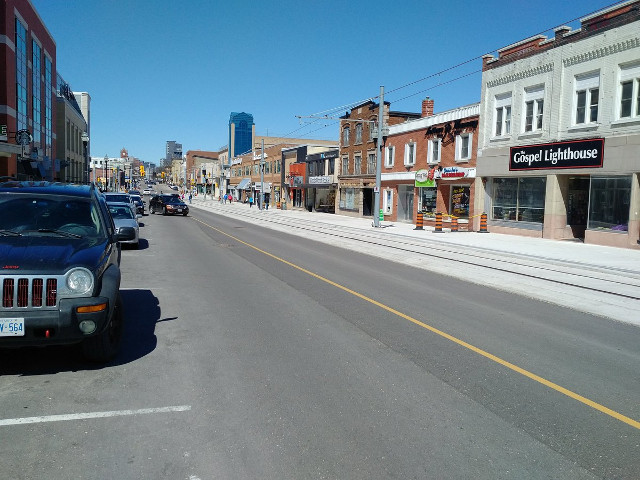 Left-turns and U-turns are provided at specific signalized intersections. In the downtowns where there is a curbside rapid transit lane, traffic will be able to cross the LRT to get in and out of driveways.

I was impressed by how nicely the tracks fitted in the streetscape, as well as the modern-looking poles for the overhead lines that will power the LRT. I was also impressed by the construction cranes I saw along the route over new developments. 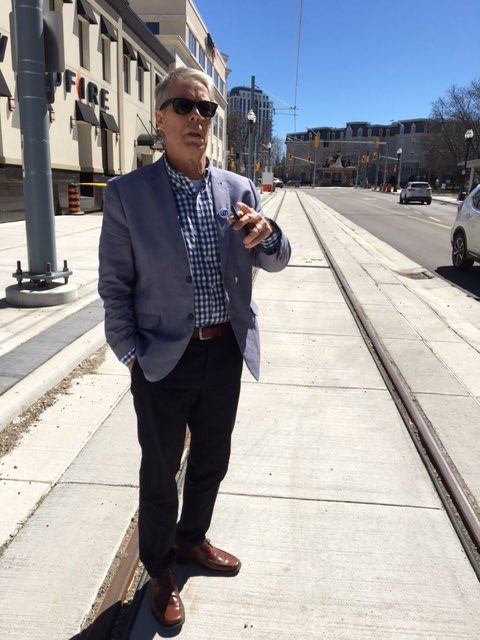 Of course, another huge aspect of the project is the replacement of the road and underground infrastructure. They literally found wooden and brick pipes over a hundred years old. As old as they are, they will not last forever, and as Tom said to me, you are going to be digging up the road and replacing all that sometime in the future. It is only a question of when and at what cost.

What I have described here is phase one of Waterloo Region's LRT project. They are already planning a phase two which will extend the LRT line from Kitchener to Cambridge extending the length from 19 kilometres to 37 kilometres.

Waterloo Region's population, currently at 535,000, is expected to grow by 200,000 over the next 20 years. As Tom Galloway said to me, you have to start somewhere, and the sooner you get building, the more you save, because building costs over time will only go up. So let's get at it!

As I left Waterloo Region, I could not help but reflect on the similarities between our two communities. There was opposition to their project as well. But as the project progressed, they overcame it. Now it is close to completion.

As much as we love our neighbours in Waterloo Region, they are in many ways our competitors in terms of investment and the war for talent. If they can build an LRT successfully and reap all those rewards, I am confident that we can too.

I extend to all member of Council an invitation to visit the LRT facilities in Waterloo in the coming weeks for which I will make all the arrangements.

"As much as we love our neighbours in Waterloo Region, they are in many ways our competitors in terms of investment and the war for talent."

Your mayor actually gets it. LRT is an investment in not only segregated right of way public transportation operating technology. LRT is an investment that not only attracts new property development but talented people, especially younger talented people. He understands that, there is a generational shift occurring in the workforce, not just in what they do but what they want out of a workplace. These new young workers generally don't want a workplace located in some far away office and or suburban business park, isolated from the rest of the city.

That property tax number is spread out over 9 years, so 1.2% increase per year, and includes funding improvements to bus service as well. Couldn't find the 60% increase to water bills, please link. And is the $920K/month interest, or interest and principle? The $235M municipal portion is being financed over 30 years.

Fake numbers, assumptions and statements taken out of context aren't really cutting it at this stage of the game. Provide links or some proof for your claims otherwise you sound a bit raving.

Start with how much their tax base has increased since construction on the line began.

And where did you get these numbers.Just curious.

Pretty sure the province will be paying some bank.Not us to Metrolinx.But what do I know.And rates are at historic lows.So theres that.

Attention to the muckrakers at NOHAMILTONLRT please read this carefully. I know you are not anti-LRT, you are just anti-transit in general. I have been in on your forms and talked to your supporters, they are mostly made up of the garden variety, anti-tax, anti-government and especially anti-transit types. Due to the advanced age of most (although not all) of your supporters, I find it quite ironic considering most of you will be loosing your drivers licenses in the coming years.

The plan is to have drivers tested every year from 70 years and up. The test will be a eye sight and hand to eye coordination tests. The entire insurance industry is demanding it from every Canadian province and US state, you are becoming to expensive to insure. Oh by the way, both the government and insurance companies still want a licensed driver in every car, even if its a driverless one.

Listen up NOHAMILTONLRT, if you are referring to the recent trend of streetcars being rolled out in generally conservative dominated cities in the US then, yes these new streetcars don't have segregated rights of way and operate in mixed traffic. However, most European streetcar systems or what they refer to as tram systems have mostly private or segregated rights of way but some sections of mixed traffic running does happens.

NOHAMILTONLRT you are getting a Light Rail Transit system, completely separated from traffic except at intersections, which will have a traffic signal control system that favors the LRT line. This is very common technology and is already in use in many US and Canadian cities.

If you are worried about your taxes going up then refusing the money to build LRT will be the last thing you want to do. I work with developers everyday as an independent planning consultant. Make no mistake, THE MAJORITY OF THE INCREASE IN DEVELOPMENT IN THE CORE OF YOUR CITY IS BECAUSE OF LRT! Without LRT you still see some development increases in the core but it will slow down. Those new developments produce more property taxes. The days of big residential developments in the suburbs are for the most part, over! You will still see some new suburban development but it will happen at a very much slower rate. Downtowns are back in fashion, the suburbs are out of fashion. Developers just follow the trends.

NOHAMILTONLRT you are competing against other cities for jobs and in demand, knowledge sector companies and workers. LRT will help attract those companies and workers. Suburban development, Highways and one-way streets won't. They kill street life and atmosphere, something that those companies and their workers for the most part find very appealing. LRT enhances street life and the urban experience as well as moving a lot of people, in a very small amount of urban road space. The choice of refusing LRT will only help other cities not Hamilton.

There are many waiting LRT and BRT projects throughout the rest of the GTA that have complete or nearly complete Environmental Assessments and are only waiting for funding. That $1 Billion will be spent, do you want it spent here? That money is going to give you a well thought out LRT line plus a BRT line from your new downtown GO Train station to your Airport as well as another new Centennial Parkway GO station.