When private companies own Grand River water rights, these tend to be used for electrical generation. Publicly owned water rights should also be used.

It never ceases to amaze me how much power I see wasted. This is true on the small scale of people not turning off electric lights when they leave a room. This is also true on the large scale of so much of Ontario's hydroelectric potential being neglected.

In order to see a good example of this latter type of waste, I invite people to ride along the lovely Hamilton-Brantford Rail Trail. When you get to Brantford, keep going along the trail until you get to the Grand River. You can then watch the entirety of the Grand River flow over the Wilkes Dam. 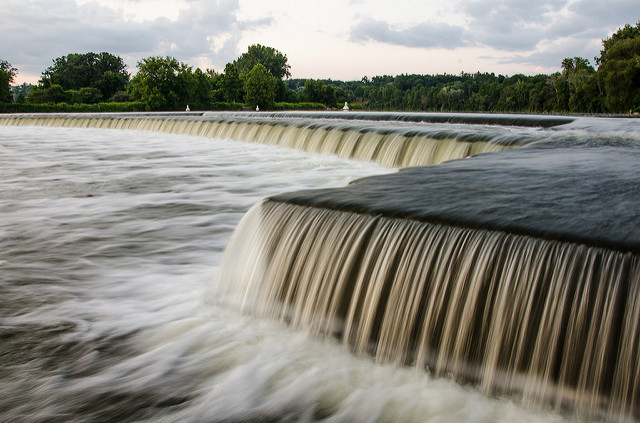 When you have finished admiring this lovely waterfall, the next stop is to see the ruins of the Alfred Watts Lock and Hydro Generating Station.

In the year 1885, Mr. Alfred Watts build the first hydro-electric power generating station in Brantford. The new technology of electricity rapidly caught on, and the power plant was steadily expanded. By 1905 it was generating 895,000 watts of power [PDF] or 895 KW.

In 1908, Brantford was connected to the "Dominion Power" (Later Ontario Hydro) provincial electrical grid. The private power company was unable to compete and the Brantford hydro-electric generating station closed in 1911.

What would be the value of this electricity today? Although electrical generation equipment is more efficient today than in 1905, to be conservative let us assume that we will only get the 1905 output of 895 KW.

Over a million dollars a year! Not bad.

But it gets better. Please note that the Alfred Watts power station only used that small part of the Grand River that was diverted into the Brantford Cut of the former Brantford Canal.

Simply eyeballing it, I estimate that this is less than 1/50th of the total flow of the Grand River. So if we were to use all the water currently pouring over the Wilkes Dam, this would generate over $50 million per year of electricity.

Run-of-the-river hydroelectric generating facilities, such as Niagara Falls, cannot do this.

When private companies own Grand River water rights, these tend to be used for electrical generation. A recent example is that of Shaman Power in Elora. Publicly owned water rights should also be used.

For hydroelectric projects, usually the most expensive part of the project is building the dam and providing compensation for the flooded area that the dam creates. In the case of Brantford, the Wilkes Dam already exists. It is simply a matter of using the water power that currently is wasted.

Damming is one of the most ecologically destructive methods of power generation there is. I truly hope that we can do better than destroying our waterways to meet our future energy needs.

The Wilkes Dam already exists, and has been there for many years. It is wasteful to not use the water power that is now simply pouring over the dam.

I'd prefer they open the dam and let the water and wildlife and nutrients within the river flow naturally. Even though there is water flowing over the top, a dam affects the physics of the running water. Silt that the river would normally carry downstream builds up before the dam and slowly chokes the riverbed. A dam stagnates the water which encourages oxygen depleting algal growth that kills fish and tends to smell bad.

Imagine a world where every river runs free. It would be really beautiful.

We have other options like solar, wind, geothermal, nuclear and maybe even fusion down the road https://www.theguardian.com/environment/... . Couple that with reducing demand and we may be able to slowly win our rivers back.

Most rivers have naturally occurring dams. For example, the Niagara Escarpment acts as a dam that holds back water that has flooded what are now the upper Great Lakes. If Niagara Falls is allowed to continue to naturally erode upstream, at some point it will reach Lake Erie, which will then cease to exist.

All of the river ecologies in Southern Ontario date to no earlier than the end of the last Ice Age, about 11,700 years ago. Please do not interpret my article as support for any particular hydroelectric proposal that involves constructing a new dam. Neither do I have any position on whether or not the Wilkes dam should be removed. However, when I googled "remove Wilkes dam Brantford," no proposal for removing the dam came up.

So if this particular dam is going to be there anyway, why not use its hydroelectric potential? Please note that I am not pro or anti the Wilkes or any other particular dam. I am simply anti-waste.