This Saturday from 10:00 AM to 2:30 PM is a kickoff party at Pier 8. The new Williams Coffee Pub will be opening. It has a 120 seat patio, along with 96 seats inside. There is a double-sided glass fireplace surrounded by couches (a great spot for wintertime). The café offers free WiFi. It will be fully licensed shortly will soon have a wet bar serving the patio from roughly 10:00 AM to 9:00 PM with cold drinks, smoothies, and so on. That's a nice touch to avoid the big lineup inside in you're only after another drink while on the patio.

Methinks that this new eatery is sure to be a huge hit. Hamiltonians need to get out and discover their waterfront and this weekend is a great time to start. 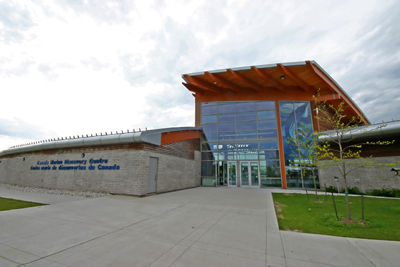 The Marine Discovery Centre, Pier 8 - Click on the photo to see a larger version in a new window (Photo Credit: Joe Ceretti)

The three-car train trolley will be on site, but not operating for another week or so.

I've spoken in the past about public art and its importance in city life. A wonderful art project has taken place with the Waterfront Trust and will be unveiled this weekend.

A request for proposals was issued to all Hamilton schools with 20 schools responding. The title of the project was "Hamilton Art Expressions". It was designed to showcase images of our city and waterfront. Twenty-five 4x8 foot murals have been created by the participating schools and all will be on display this Saturday.

Next week, the murals will be mounted in their permanent location - the water-facing wall of the Port Authority shed just east of the Discovery Centre along the new portion of trail linking Pier 8 to the HMCS Haida. This will be a welcome dash of colour and art along this stretch of trail. Congrats to all students involved. You've just helped brighten up another corner of our great city.

Many Hamiltonians just don't realize how beautiful the waterfront is - Click on the photo to see a larger version in a new window (Photo Credit: Joe Ceretti)

Also this weekend there will be a public open house for the Hamilton Harbour Queen tour boat. Folks can stroll on board or just sit on the top deck and enjoy the view. This dinner/dance boat has been a huge hit since setting sail last summer and should be experienced by all. Twenty-five community booths and displays will also be on site this Saturday along with clowns, music, face-painting a car show and free BBQ.

I've also mentioned this before, but the Hamilton Waterfront Trust deserves tremendous accolades for their great work on our waterfront. For too many years Hamiltonians were resigned to a dirty, un-accessible harbour. With more plans in the works in the years to come our waterfront is destined to become a major hub in our city. The Waterfront Trust has taken a lead role in seeing this happen and is much appreciated by residents from every corner of this city. 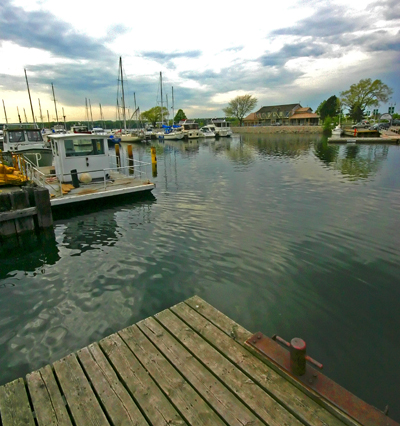 A Taste for Downtown

Another downtown event this Saturday is the Tastes of Downtown Restaurant Walking Tour, organized by the Downtown BIA to raise money for Amity. Call ahead to book your tickets and pick which tour to take:

Ventura's restaurant on James North is just finishing up a brilliant expansion into the store front next door. I was in the other day for a cappuccino and took a look. It has beautiful new ceramic tiles and a nice, dark-stained hardwood ceiling like the rest of the restaurant. A nice new chandelier hangs in the new space which is down a few steps from the entrance to the main restaurant. I look forward to enjoying an upcoming meal is the new space at a classic Hamilton restaurant. According to the owner the new space will be open on Saturday, June 3.

Bread and Roses, a new organic, local food café is opening in June on King William at the Sky Dragon Centre. Along with a patio, this will be a huge hit in the downtown core and among health conscious residents.

Construction begins August 1 on the 15 storey condo tower at King William and Ferguson, another great piece of the revitalization puzzle.

A new optical boutique has opened on Locke South near the bakery. Pure has moved above Goodness Me on Locke. Check out the snazzy chandeliers. A new gallery and bistro will be opening in the old space occupied by Pure.

Construction begins shortly on the new five storey condo building at King and John, next to Pizza Pizza. Occupancy is slated for spring 2007.

A new Chinese restaurant has opened at Rebecca and James. I can't quite pronounce the name, but judging by the mobs of people it must be good.

A cool new four storey loft building is up now on Aberdeen Ave. west of Dundurn St. It sits next to the soon-to-open 7 Windows Restaurant and Lounge in the old TD Bank building. Final renderings of the loft building look sharp and this small piece of real estate in southwest Hamilton has the potential to become a model of sustainable urban infill. It's not obtrusive or ugly, nor is it another row of brutal townhomes, but funky urban living next to a trendy café with courtyard patio. A once run-down looking property will now be humming with life, energy and people. Let's hope to see this repeated all throughout Hamilton in the years to come.

The long stalled banquet/convention centre facility next to the Ramada Hotel is back on again with a scheduled fall opening. This facility has the potential to be a great draw in the heart of Hamilton and is one more fabulous development taking place along King East. Word is the drawings are fantastic and the facility will be wonderful.

The streetscape project on Bay St. has seen a new component added – vertical fixtures of a round glass tube surrounded by stainless steel poles with a dish-type structure on top. The entire thing lights up at night and is quite cool. Hopefully more of these are planned for the area around Copps and between King and Main. And perhaps the lighting tubes could be fixed with different coloured lights to spruce up the ambiance in the evening. For a glimpse of the first two, head north on Bay to Cannon.

While it lasts, here's a shot of the mural just uncovered on the Denningers building downtown. 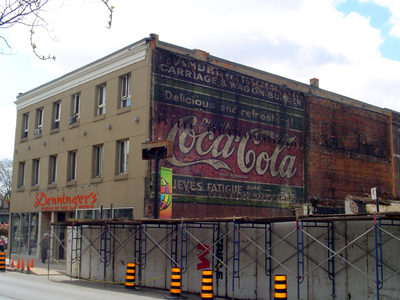 Finally, yours truly was a guest on the Smith and Hayes show on May 23, along with George Brown of Downtown Brownies Fine Food and Spirit, and Reg Beaudry of Urbanicity. The topic was 'urban Hamilton' and RTH was discussed among other things. The feeling was downright upbeat and positive as we discussed the vibrancy in downtown Hamilton. Come see what all the fuss is about.