I had the opportunity to sit down with Steve Parton, owner of Avalon Music Academy, who will read from his hilarious book, Cancer Trip, about his misadventures with cancer.

Coming up on Saturday, February 25, 7:00 PM at the Garstin Centre for the Arts (Dundas Little Theatre), six authors from the Dundas Writers' Group are holding their annual Meet The Authors book launch and sale to celebrate the release of their newest works. Admission is free, and there will be door prizes, snacks and a cash bar.

J.S. Veter, Helena Trooperman, Robert Bell, Cameron Goede, and Steve Parton will all be reading from their new books. John Ferns and Peter Branton will also be reading. 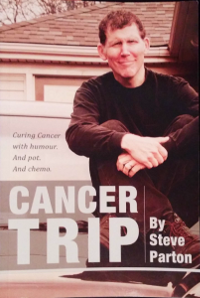 I had the opportunity to sit down with Steve Parton, owner of Avalon Music Academy, who will read from his hilarious book, Cancer Trip, about his misadventures with cancer. One of the more salient truths that we discussed is that in recovery, there is plenty of time for reflection and to make use of this time, he has written two books. The first one was Secret of the Ossuary which is more of an adventure book but this current one is much more personal.

I have been following the roller-coaster of Steve's experience living with cancer over the past few years as we are friends both in real life and also on Facebook where he has been posting various updates on his condition. From that perspective, I think this book will be of interest to anyone who has gone through a serious medical condition or has family members who have.

As Steve explains, "The book came about because of the crazy experiences I'd had in the hospital originally. In 2013, I was told that I have cancer and that it's enormous. My kidney had a tumour the size of a grapefruit. They said it had to come out right away which meant in two weeks. The doctor said, 'You've got two weeks to work on your bucket list.' Turns out I don't have a bucket list. I've done everything I want to do so for the next two weeks, I did jigsaw puzzles with the kids and that sort of stuff.

"The surgery was successful but beforehand, the doctor said, 'You might not make it. There's a 40% chance you won't wake up from the table. So update your will and get your affairs in order.' I t was not a fun time but the surgery was a success and I was cancer-free.

"Recovering in the hospital, I had crazy, crazy nurses at night, and so I started recording all my experiences on my Dictaphone. One of them was exceedingly stupid and couldn't get the med schedule down at all, another was exceedingly mean, and another was actually abusive. I don't like to talk about it but it's all in the book.

"From there, I was cancer-free for a year. They did a cat-scan at the one year anniversary and they found out it had come back. The doctor told me I had a cluster of cancerous lymph nodes. I thought he said I have a cluster of 'nymphos'. No such luck.

"It turns out my doctor, Dr. Kapoor, just does kidney cancer. I found articles on him from all over the world as doctors everywhere refer to Dr. Kapoor and make decisions based on his work. Right now he's in China teaching doctors there how to do it.

"I had this buddy of mine named Stan who drives a truck for a living who told me that pot is the way to cure cancer. At first, I didn't want to insult my doctor. 'I know you know lots but I've got this buddy named Stan who drives a truck who says pot's the way to go.' So then the doctor and I discussed it and essentially he gave me two y ears. The chemo could possible keep the cancer at bay for two years but when I researched this particular chemo, I saw that the average life span is eleven months.

"At this point, I said to myself, 'All bets are off.' I told Dr. Kapoor that I have a buddy named Stan who drives a truck who says pot is the way to go. My doctor did not know much about pot and thought maybe it was a placebo but go for it.

"Each cat-scan while I was on the chemo and the cannabis oil showed the tumour shrinking and shrinking. It's important to note that I had a medical marijuana license.

"I had a farmer friend grow it for me and then I would take the grass and make it into cannabis oil as I've learned from phoenixtears.ca. Rick Simpson is the pioneer of curing cancer with pot so I did everything that he told me to do and that Stan told me to do. For about two years I had great success combining the pot with the chemo.

"What was weird was that at the time, I was forty-three years old, I've been a musician since I was ten years old, and I've never done drugs. I just never got around to it. I'd always intended to try it one of these days but at that point, I had never done anything.

"Basically I got as far as I could with the pot so I'm no longer using it. The pot wasn't doing anything. The chemo's not doing anything and I'll be stopping that soon."

To make it clear, this book is not a recipe for how to cure cancer. It does offer, however, intriguing and often humorous insights into the human condition and also the oft-debated divide between conventional and naturopathic medicine.