The expressed fears, in addition to hand-waving about traffic and the sewer system, centre on low income families, criminal activity, "illegal dumping" and declining property values.

Today's Planning Committee meeting included a proposed Urban Hamilton Official Plan Amendment and Amended Zoning By-law Amendment for a 19-storey, 219 unit apartment building planned for 860 Queenston Road in Stoney Creek. (It's item 6.2 in the agenda, but I can't link directly to it because the city's Committee website is unusable-by-design.) 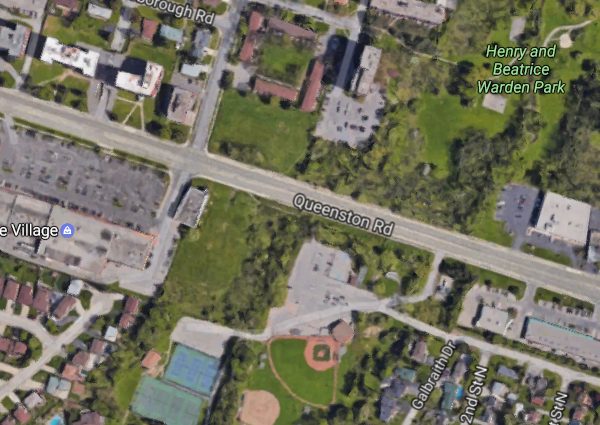 The proposed building would occupy a greenspace on Queenston Road immediately west of a two-storey office building and a Value Village with a large off-street parking lot. On the other side is a sports field and a strip plaza. Across the street is a a row of mid-rise apartment buildings, a park and an appliance store.

19 storeys is taller than typical for the area, but it's not as though the building will be towering over any of the nearby residential homes, which are far enough away that shadows should not be a concern. In addition, the part of the greenspace east of the building that is currently forested will be retained as natural open space.

The 219 units will be split roughly between one-bedroom and two-bedroom apartments, providing some variety in housing options.

And given that it sits right on a major transportation corridor, it's an excellent location for infill development. The building is just 750 metres from Eastgate Square, which makes it a good candidate for transit-oriented development when Hamilton's B-Line light rail transit (LRT) line is extended in the second phase of construction.

The applications have merit and can be supported as they are consistent with the Provincial Policy Statement (2014) (PPS), conform to the Growth Plan for the Greater Golden Horseshoe and upon finalization of the UHOP Amendment, will comply with the intent of the UHOP, and in particular with the land use policies for Sub-Regional Service Nodes, High Density Residential and Residential Intensification contained in Volume 1.

But we can never underestimate the capacity for knee-jerk suburban NIMBYism to recoil against anything that looks like density.

Along with the staff report were several letters written by nearby residents to express their "concerns" with the proposal.

Here are some excerpts from those letters:

This area already has a high concentration of multiple dwelling high density units, and more than our reasonable share. Any increase in population/population density will only put more pressure on the traffic, etc.

This area already has more than its share of multiple dwelling high density units, increasing the population will only put more pressure on the traffic, etc.

It is now coming out, as reported in the Stoney Creek News that it will have affordable housing units. At one time that would have been called 'geared to income' or 'low income housing'. However to be politically correct it is now called 'affordable housing'.

However it does not change the effect, it is intended to have a mixture in the building which everyone, if truthful, will recognize does not work and will detract from the area.

This area already has more than its share of multiple dwelling high density units. Increasing the population will only put more pressure on traffic, parking, schooling and a fragile sewer system.

This high rise will radically change the nature of this neighbourhood which grew out of parkland and enjoys the benefits of the quietness and privacy of such.

This project will markedly affect house values not to mention loss of privacy and increased security issues.

I believe there are another 6 large apartment buildings in that area. That is a great deal of people for such a small area. I wonder how many people that would be?

The classist signalling could not be much more blunt and ugly. Several letters used almost identical wording about the area having 'more than its share' of apartment buildings. The expressed fears, in addition to hand-waving about traffic and the sewer system, centre on low income families, criminal activity, "illegal dumping" and declining property values.

The Planning Committee, dutifully following the direction of Ward 9 Councillor Doug Conley, who came armed with the ire of these vocal residents, ignored the staff recommendation to approve the rezoning and voted instead to reject it.

This is why we can't have a nice city.

I was listening to the city stream while I worked. From the way people talked I kept imagining this was next to a residential area and was going to be casting shadows and crammed into a minor residential neighborhood, like that plan in Dundas that got so much ire.

Then I saw the streetview links that were flying around.

It's an open office-park area, near an expressway ramp and major transit hub, not close to any detached residential, close to multiple other highrises, near a strip mall.

Okay, I admit that the residents comments made me go "ouch"; but in all fairness most of us out in the Creek are in the dark. We are not as well informed and it doesn't help that our Councillors keep us in the dark (no Community meetings, no newsletters, no websites, no social media of any kin). So when proposals of this magnitude come forward, those that choose to become engaged shouldn't be ridiculed. Care should be taken to help educate on the need for increased density. Having said that however, what has been missed is that this land was an infill and this proposal, which abuts the Battlefield Creek, requires an abundance of amendments to the regs on setbacks, maximum density and such. I believe the Planning Committee, for the most part, overlooked the public comments (which is par for the course) and focused on those planning issues.

Interesting to know whether this Planning Committee's concern is strictly height related, as this proposal is certainly higher than we have come to see in the suburbs. But most of the tall buildings in this area are within 2-4 stories lower than this one... And most abut single family homes, which continue to be marketable to purchasers and/or renters.

Re: Dundas project, that's pure NIMBY too. That proposal was appealed by a few neighbours, despite the fact it is 9 stories, flanked on either side by commercial properties (north) and existing 7.5 storey rental building (south). Wasn't much ire there but from the appellants... it has staff support, Plan Committee support and Council support.

New rental, which both Stoney Creek and Dundas surely need wont be built unless builders can cover their cost and make a return.

Karma. When you let the government mess with private property rights (Greenbelt, etc), don't be surprised when these powers come back to bite you.

Wow...some more classic Stoney Creek NIMBY regarding a totally different apartment development (with all the development the councillor likes to stifle, I wonder if the rest of us can get a rebate on our property taxes that are artificially high thx to the constant trimming or rejecting of new developments). This time local residents managed to save the world by not allowing a 9 storey building to be built right. next. door. to a 7 storey building. It's being scaled back to 6 stories now. But the letter of the week belongs to this resident who purchased a condo in the 7 storey building right. next. door. First letter from the top: