Reflections on The Women's March on Washington

The WMW made a powerful statement, but it is only the beginning.

In 1980, in one of my earliest political actions, my parents drove me and my good friend Karen from our suburban neighbourhood into Atlanta to march for the Equal Rights Amendment, a proposed amendment to the U.S. Constitution that was never ratified by enough states. As I remember it, sporting large buttons that read "ERA NOW," we marched around the Georgia State Capitol with a few hundred other people.

Many years later, weeks after casting my absentee ballot for Hillary Clinton for President in the state of Virginia (my last place of U.S. residence), I phoned my parents on the afternoon of November 9, 2016 to share my excitement at the impending election of the first female American president. Overcome with emotion, I could barely speak as my mom and I discussed what had led up to this historic moment.

I don't need to recap what happened next, when election night morphed into election nightmare, a nightmare that has only worsened over the past week as we sit through the first days of the Trump Administration.

What's the best way to wake up from a nightmare? It turns out that a road trip and a huge march can help immensely.

My friend Mary Louise likens going on a march to the act of prayer. It's just something visceral, she said, an act that just seems necessary. You don't know if it will affect the outcome of a situation or not, but you just want to be part of it, to stand as a witness, to say "This is important."

Afterwards, you will never really know for sure what part your own actions had in the outcome.

Going to the Women's March on Washington (WMW) was like that. It was an act of prayer, of solidarity with my American family and friends who were devastated by Trump's election, a way to say that all the misogyny and hatred and bigotry and xenophobia were not OK.

This was not the world I wanted to live in, nor a direction that I could just accept for the country of my birth. I believe in democracy, that Trump is the President, for now, but I don't have to like it. As one of the signs at the WMW read, "Dissent is Patriotic."

As our group arrived at an outlying Metro station in a Maryland suburb of Washington, DC, the line to purchase tickets snaked out of the station and down the sidewalk, the first sign that we were headed towards something big. (Fortunately we had purchased our Metro tickets in advance.)

We boarded a full train, only to experience more and more people crowding in at each stop until eventually there was no room to budge. In that half-hour ride, I met a Canadian living in Virginia Beach who had brought her teenage daughter, a delegation of women from Maryland, and a woman sporting a pink hat who led us in echoing a song she had composed for the march.

As we approached our stop near the Mall in Washington, our driver informed us that our train would not be stopping due to crowds in the station. Next stop was Union Station, which was also very crowded, and so the 'tap off' requirements to exit the station were waived. (I later read that more than one million trips were made on the Metro that day, second in volume only to President Obama's 2009 inauguration.) 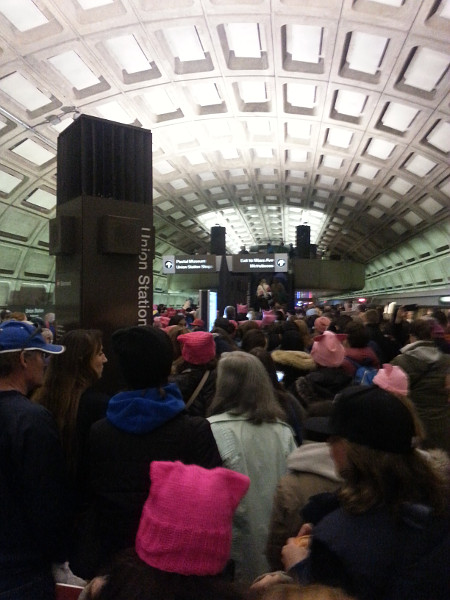 As we exited up and out into fresh air, we moved along in a sea of people, making our way towards the Capitol building and passing by hawkers of posters, flags, and bottled water, all of them African-American men. I wondered what these men thought of the "Women's Lives Matters" t-shirts in their displays, and whether anyone would buy one.

After being diverted around a large array of Inauguration Day portable toilets (brand name: Don's Johns!) that sat empty and off limits to marchers, we made our way towards the area where the speeches were to be given. We never got close enough to hear or see any of them. 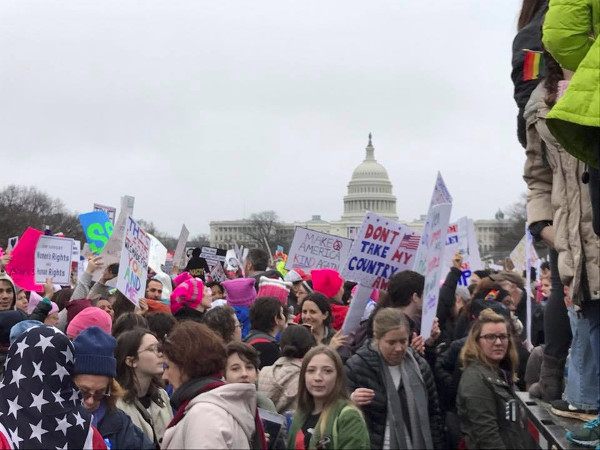 Instead, literally hundreds of thousands of us were left to our own devices to experience the crowd, connect with each other, and march on.

Attempts to text or phone marching friends were futile: the local cell infrastructure was completely overwhelmed. As our little group moved to the middle of the Mall, people milled around us, greeting one another, chanting, and carrying their signs and banners. 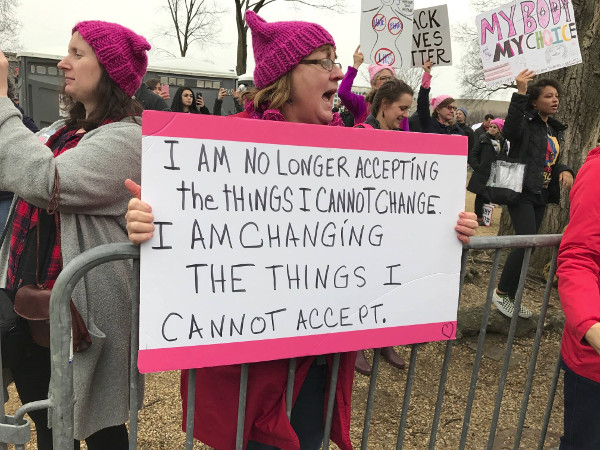 We continued over to Madison Drive, a small street that runs parallel to the Mall in front of the Smithsonian museums, and slowly made our way towards the Washington Monument and ultimately the Ellipse, in front the White House.

The sheer volume of signs, most of them homemade and many incredibly creative, was an assault on the senses. They ran the gamut from poignant ("Strong Women, May we KNOW them, May we BE them, May we RAISE them") to witty ("Girls just want to have FUN-damental Rights") to snarky ("This Pussy Grabs Back"). 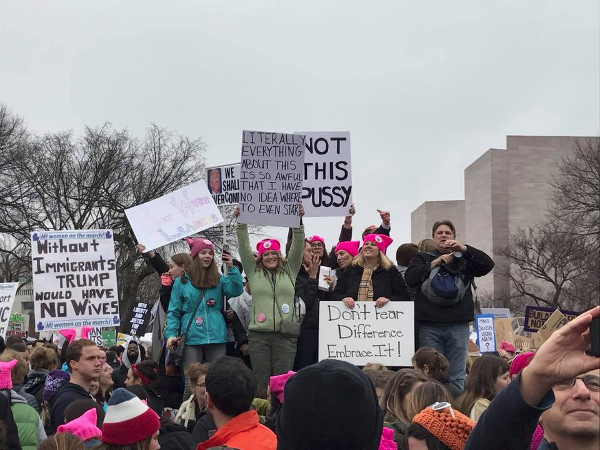 They were angry ("Not Ready to Make Nice" and "Not my President") and hopeful ("If one man can destroy everything, why can't one girl change it?"), even confident ("Barack, You Rest We Got This!").

Many focused on women's rights ("Women's Rights are Human Rights") and responses to Trump's misogyny.

But people expressed their concerns about a wide variety of other causes under threat by the Trump Administration: climate change ("Climate change is not a hoax; you are"), health care ("How dare you take away my Healthcare?"), the presence of immigrants and refugees ("We are all Immigrants" and "Refugees Welcome Here"), Black Lives Matter, civil rights ("We shall overcomb"), and a favourite within our group, "Ugh, Where do I even begin?"

By all accounts, people were practicing what they preached. They were talking to each other, letting each through bottlenecks, and making way for strollers and those in wheelchairs. Despite the crowds and very minimal police presence, I never felt scared or crushed or claustrophobic.

A student pro-life group congregating on the corner of Constitution Ave created the only diversion along the route. They were surrounded by parade marshals with locked arms, protecting their presence on the street even as the organization had been removed from the list of official sponsors of the march. Moving around them, the throng chanted "My Body My Choice" and pressed on. 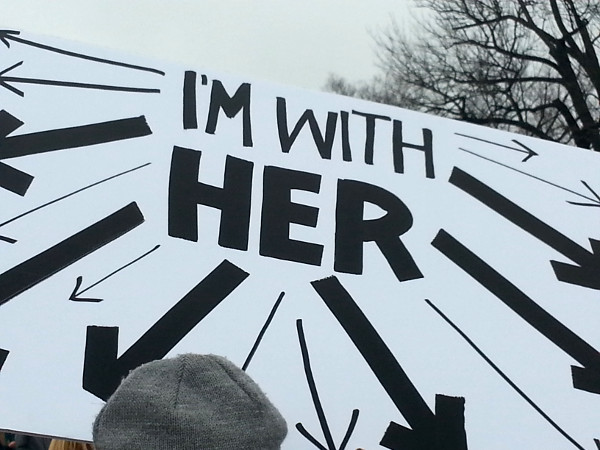 After the March, What's Next

Back in Hamilton, many people have thanked me for marching in Washington. "I am so proud of you for doing the March. Way to go," texted a neighbour. Even my City Councillor and my supervisors at work thanked me for attending, and I am grateful for that support.

Yet going to this march was something I did for me. It was even selfish in some ways, spending two full days in a van with four thoughtful, determined friends who are passionate about Hamilton and the world.

What could be better than taking time out of our busy lives to spend time together and to experience this unforgettable weekend together? What could be more uplifting than to surround myself with huge crowds of people who shared similar concerns and were united in their dislike for the new President?

And now come the questions. What good did it do? What are you going to do now?

The WMW made a powerful statement, but it is only the beginning. I do not foresee any dramatic changes to my life: I am already working for my community and my city and voting and donating to causes I care about. But I have identified a few intentions, and making them public puts pressure on me to follow through. So here they are:

Plus, you can bet I will continue to exercise my right to vote in the U.S. elections!

As some of my existing projects wrap up in the coming months, I look forward to taking some time to read and to listen and to think about where to focus. I have heard the cries of women of colour, the complaints that white women are immune to their causes.

And I am deeply aware of how we ghetto ourselves by socioeconomic status. Many "haves" want nothing to do with "have nots," and the divide is growing.

Will my actions alone make a difference? They will to me, and hopefully to others. As one of the march signs read, "Each woman is a snowflake, but together we make a blizzard." And, as my friend and fellow marcher Stephanie posted, "This is a marathon, not a sprint."

Great piece, Sarah. I wish I could have joined you.

The best I could do on the day was to chat with marchers from the passenger seat of a friend's car as they marched down the streets of Ithaca, New York.