Say Goodbye to the Gore

The Gore building owners, after agreeing to preserve them, have left them open to the elements and are now claiming that these solid stone buildings are no longer salvageable.

My friend Susan Schneider, an artist, used to have a painting studio in the room above the cigar store at King and James. That was in the 1960s and early '70s. Looking out over Gore Park, we spent hours comparing the light and the ambience, and the buildings, to paintings by Vuillard, Bonnard and J.W. Morrice. Gore Park was like Paris in so many ways.

The Gore as a distinct area was a triangular piece of land was left undeveloped by the two founding fathers of the town, George Hamilton and Nathanial Hughson. Businesses grew up around this piece of land for almost fifty years, over the first half of the 19th century.

Following the historic pattern of common law land use in Britain, the land was recognized as 'common ground' by the citizens. The majority of Hamilton residents in the first half of the 19th century were from Britain.

These first few waves of colonists designed both their homes and their towns according to British precedents, including a recognized open space for sheep, cows and picnics. 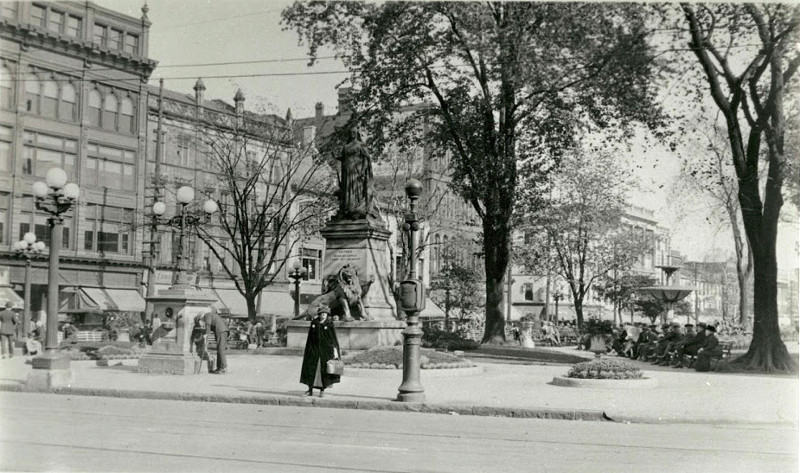 In effect, the people of the Gore District had been fighting to keep the space open and for public use from the early 1800s until the implementation of the Special Committee on Ornamenting the Gore on King Street in 1853.

The fountain was installed in 1860. The towns people celebrated the event because it transformed the area into a proper park, and because it commemorate Hamilton's new water system and pumphouse which provided accessability to fresh water and put an end to the frequent cholera epidemics.

For the next 100 years, Hamiltonians had a park that was full of huge trees, flower gardens, a lovely wrought iron fence to keep them from wandering into the traffic, and benches always full of men in top hats taking an afternoon break or women dressed for a day in town with shopping and other business. In the evenings the park was full of music.

There were ice cream wagons. The park thrived. The streets thrived. Georgian buildings were replaced by a large post office. The old hotel was replaced by a newer, larger one, but the park was still a bustling center for residents and tourists. 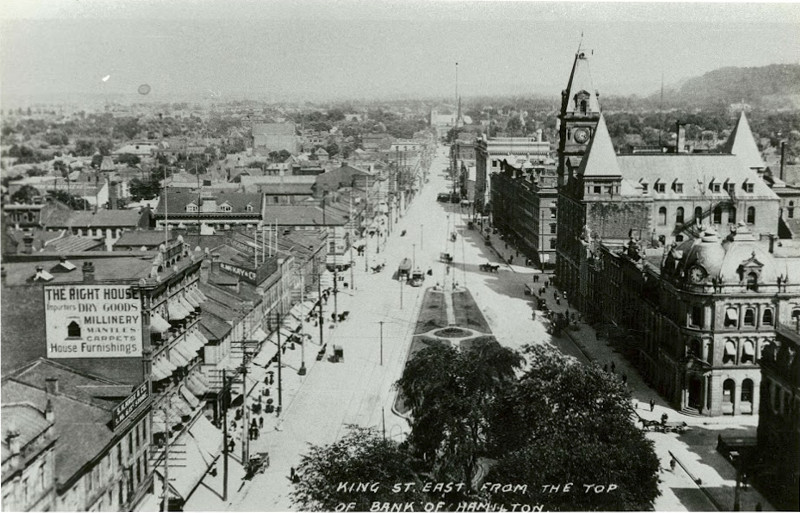 The development of Jackson Square wiped out the northwest corner. Then the glass box banks wiped out the whole west side. The beautiful Renaissance Revival at 12 King Street became a glass box in the 1970s. The majestic Canada Life Assurance headquarters, which became Birks, went down to be replaced by a glass box bank shortly thereafter.

Then council approved a 'Downtown Action Plan'. All the trees in the park were cut down. The fence was taken down, the grass, flower beds and flowering shrubs were eliminated, and the whole park was turned into a cement wasteland. The rumour was that someone had a brother with a cement business.

Public reaction was so strong that within five years the concrete was taken to the landfill and a poor copy of the original park was reluctantly restored. 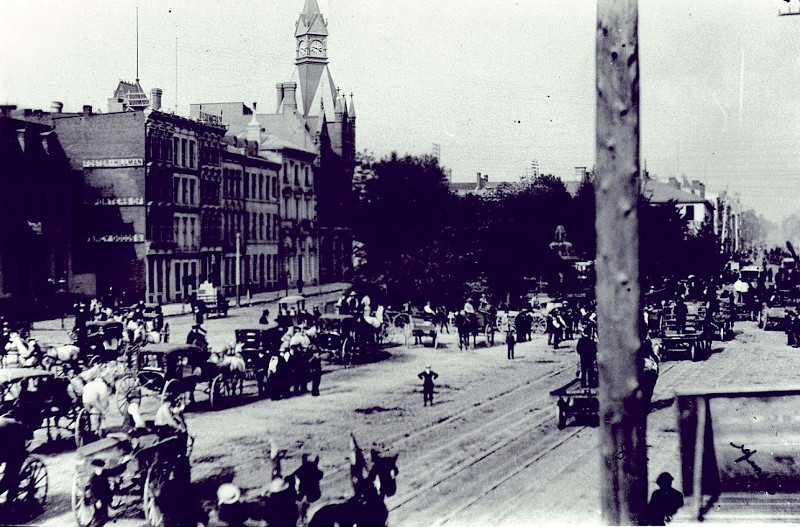 For many years now, The Friends of Gore and Gore enthusiasts have been fighting to save the last remaining buildings from the original park.

The owners, after agreeing to preserve them and promising to protect them instead of having Hamilton designate them, have left them open to the elements for three years and are claiming now that these solid stone buildings are no longer salvageable.

The new plan is, of course, to replace these beautiful buildings with another glass box. Currently they are dithering over what might be duct-taped back onto the surface in an attempt at facadism.

With all we now know about how long the glass in glass boxes lasts, how much it costs to heat them, and how many birds are killed every year crashing into the windows, I can't believe that we still allow our City Council to destroy a once beautiful city.

Say goodbye to an original stretch of Gore Park buildings, to a wonderful building that predates even the city of Hamilton and say hello to a few more rich people getting richer and a truckload of dead songbirds.

Well said ... rotten that you had the opportunity to say it.

it's so sad. In my hometown also a lot of old buildings are destroyed and no official opposes it...

“You can never be overdressed or overeducated.” - Oscar Wilde, so there's no reason not to use assistance, if you have no inspiration and you need some help.