The Train of Thought is a thoughtful, provocative theatre production that explores difficult topics through conversation.

If an irritant enters the shell of a somnolent mollusk, it can disturb the soft tissue and stimulate defence mechanisms into burying, layer upon layer, said irritant, in an effort to destroy it. Sometimes, the result of this phenomenon is a pearl. Real pearls can be naturally occurring or cultured. Fake pearls are fake pearls.

The Pearl Company is billed as a theatre, gallery, and a centre for the arts. In 2006, in a rundown, artless part of town, Gary and his partner, Barbara Milne, took over the old factory and went to work, cultivating beauty.

Some considered their efforts an irritant and layer after layer of bureaucracy ensued. The Pearl has survived and there's a rare, fine, admirable, valuable gem on Steven Street.

The Pearl is a three-story brick building constructed around 1910. It was originally intended to be a casket factory, but that plan died. Many businesses have called the building home since then. Most significantly, The Canadian Pearl Company, which made fake jewellery, used the space for 30 years. Embedded in The Pearl's floors are plastic pearls: priceless.

Like any good Renaissance Man, onion, or pearl, Gary is well layered: Artistic Director, composer, cook, musician, playwright, performer, promoter, philosopher, set builder, social justice activist, technician, theatre owner, writer, ... and he put his life where his mouth is: Gary and Barb live in the building, where they work.

"I think everyone wants to have a more meaningful life," said Gary. "I've found one here." The much celebrated (arts) revival in Hamilton is indebted to tireless pioneers like Barb and Gary.

When asked his favourite role, Gary said, "Artistic Director of The Pearl. It has allowed me to participate; co-produce, do sound, lighting... in the works of others and be exposed to many great artists and thinkers."

The performance space at The Pearl is intimate, which makes for a more visceral experience. "Theatre is an exchange of ideas; it's an educational tool," Gary said. "People have told me, 'I feel like I'm part of the show here,' which is ideal; all the nuances of the performance are communicated."

It's a perfect setting for Gary's upcoming play, The Train of Thought, part two of a trilogy he's written.

The setting is simple: four people, riding a train, chat. The plot thickens and goes deep, however, when we learn the passengers are three men; a Christian, a Muslim, and a Jew, all fundamentalists, sharing their trip with a female, an atheist, who teaches science. They talk about life, death, and afterlife.

"The play is meticulously researched," said Gary. "I've exerted passages faithfully (from Holy books) and used them in the dialogue. It presents what is said in fundamentalist language, laying bear the words of religion."

Where are they going? What is their final destination? What are they talking about? Who's right?

Undoubtedly, it's provocative. "It's not disrespectful," Gary said. "Some people may be offended, but I hope not. It's presenting difficult topics through conversation." After each performance of The Train of Thought, there'll be an open discussion. "I'll lead the talkback," he said, laughing. "I wouldn't put the actors through that."

This was the second interview / conversation I've had with Gary with the intention of a Raise The Hammer profile. Two years ago, we sat down to talk about The Pearl, but the conversation meandered to deep places, dark spaces, and was more impacting and thought provoking than I'd anticipated. I had a hard time writing the piece and couldn't spit it out.

All aboard. Where will The Train of Thought take you? It departs Thursday, January 26, from The Pearl, naturally. 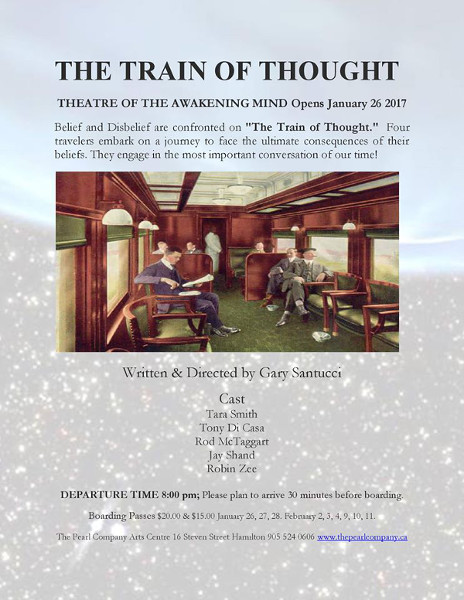 Poster: The Train of Thought

Fact: Gary Santucci is a slum lord and knowingly houses crack dealers and crack addicts in illegal apartments, then claims he's cleaning up the neighbourhood. But oh what a creative genius!