Over 100 participants overwhelmed the School Board's efforts to control the agenda of Wednesday's accommodation review meeting.

On this past Wednesday night, Sir John A MacDonald School hosted the first public meeting of the Pupil Accommodation Review for West Hamilton, a review that encompasses nine schools in Wards 1, 2 and 3. 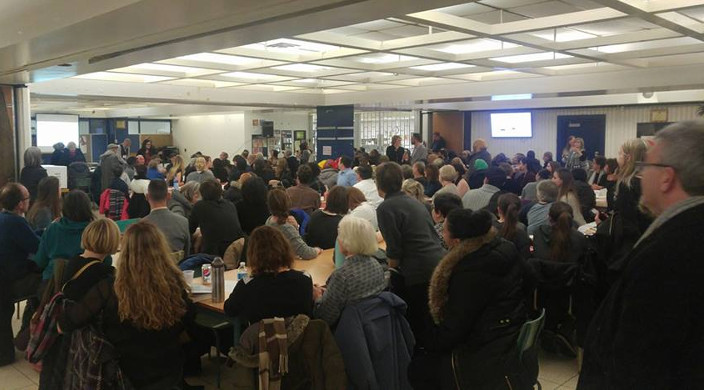 The Initial Report [PDF] that kicked off the process describes a costly state of disrepair at Hess School, with a maintenance backlog of over $3,000,000.

Combined with the Province's rules favouring money for new school builds over upkeep, it leads to a difficult future for the beloved community hub.

Concern about the closure of Hess School brought well over a hundred participants to last night's meeting.

Preparations for the evening at the working group in December included Superintendent Sue Dunlop's insistence that there was to be no open microphone.

Instead, there would be a brief presentation to start, and then the group would be divided into smaller tables with scribes and facilitators to capture the answer to a series of set questions.

Needless to say, that's not what happened. There were far more participants than staff expected, and the first 15 minutes were a scramble to move tables and chairs into position in the cafeteria to accommodate the crowd.

Staff also apologized in advance that the projector screen was too small for the room, and unreadable from the back of the cafeteria.

At that point the presentation began, and the situation began to deteriorate immediately. Non-native English speakers quickly became frustrated as their translators struggled to keep up with the pace of the presenters and their love of complex bureaucratic language.

Staff attempted to offer opening remarks, lay the ground rules for the discussion, and present complex data on too small slides. However, they quickly lost control over the process as participants began to stand and ask questions. Without being provided a microphone, attendees instead shouted their concerns from the floor.

'Not a Political Meeting'

At one point, a participant demanded that the five Trustees present speak up and offer a commitment that no schools would be closed during the process.

Dunlop insisted that this was not a political meeting and that no such statement would be made, at which point Board chair Todd White stepped in to offer more reassuring comments.

He insisted several times that the initial report and its recommendation was just a discussion starting point, and that no decision had been made about the closure or any of the other potential outcomes of the PAR process.

After a number of impassioned speeches and questions to White, the fire burned down to coals, and participants gathered at tables, in some cases by language group to take advantage of the translators, to offer their feedback.

Discussion was vigorous, and went well past the allotted hour for the meeting.

By 7:45 PM or so, with conversations still underway, someone pulled the fire alarm, and the building was evacuated. The meeting abruptly ended.

Despite the confusion and disorganization, perhaps the most interesting note of the evening was the presence of Jasper Kujavsky, the consultant behind a recent, controversial report on the expansion of First Ontario Centre (FOC) into an entertainment district.

The potential sale of a vacant Hess School would only sweeten that deal, raising the concern of a return to the casino debate in Hamilton.

Kujavsky made a point of speaking to every trustee who was present last night one-on-one, and spent nearly 20 minutes huddled with Ward 2 Councillor Jason Farr.

Residents have already begun to question the optics of this, especially in the absence of a lobbyist registry at the school board level.

In the end, the confusion of the meeting and its abrupt end make a good case for adding a third public meeting to the process, a decision Dunlop says is at the discretion of the Review Committee.

As opposition to the closure gathers steam, there are many unanswered questions. Despite the $3,000,000 maintenance problem at Hess, is closure the only option - why can the province not be pressured into repair money?

How do the upcoming changes to French Immersion affect the enrolment at Benetto, where most of the Hess students would be bused?

Why do the board's projected enrolment numbers not take the new West Harbour development into account?

And why does this process not address the crowding at Ryerson and Earl Kitchener?

With this much public engagement and so many unknowns, the Pupil Accommodation Review committee has a long and delicate task ahead of them as they work towards the June 5 presentation of their report to the Board of Trustees.

Dr. Davey (built 2010) has 298 empty spaces, while Queen Victoria (built 2009) has 201 based on 2016 data. The numbers are not projected to change significantly over the next 10 years. Hess St can only accommodate 450 pupils, less than the excess space at the two schools built in the past 10 years. If the school board had built the schools based on good planning data, would we even be discussing school closures? Why are the board planners/builders not called to account for their decisions?