Snow Clearing Good Enough for the Likes of You

A nice big wall of snow was left blocking the bike lane on Herkimer four days after the last snowfall.

Four days after Saturday's snowfall, the City of Hamilton provided its usual standard of snow clearing. With the commendable exception of Cannon Street, all too frequently the City has made things worse than a "do nothing" option by pushing snow into active bicycle lanes.

One of the most blatant examples is at the middle of Durand Park, only half a block from where I live. The City snow plough operator pushed all the snow from the car parking lane right into the bicycle travel lane. And then when the car parking lane ended, left a nice big wall of snow to obstruct traffic. 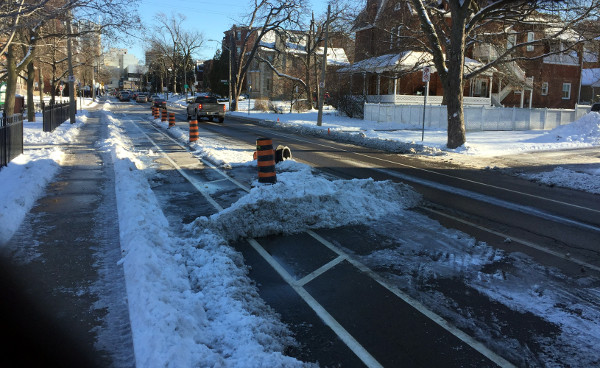 Good enough for the likes of you!

Kevin, how can you be contacted? The City is talking about taking out the King St. bike lanes to accommodate the LRT. The way Dreschel puts it, there is no other option, and it's hard to disagree. I ride to work every day from the Strathcona neighbourhood and I rely on that lane to get to Westdale. How else can I possibly get there? Even the Dundurn lanes are coming out. How do I possibly ride into Westdale without that lane? Longwood will also be inaccessible because of the trainyard. Am I supposed to accept that I can't ride west of Dundurn any longer? As you know, cycling is the most democratic, cheapest, least polluting form of transport there is and it's just not on to prevent me from riding and instead ask me to...what? Pay for the train so I can get from Dundurn to Longwood and Westdale and the waterfront? Kevin, I need to hear what you think about this plan.

tl;dr I can't get over the 403 without bike lanes. They're essential. Please help.

To answer your question, you can see me any time at any meeting of the Hamilton Cycling Committee, which meets on the first Wednesday of each month at 5:45 PM at City Hall. Just walk in and ask at the security desk which room the Committee is meeting in.

That is also an appropriate place to express your concerns, as this Advisory Committee was appointed by Hamilton City Council for the specific purpose of providing advice to Council on cycling issues. If you would like to make a presentation to the Committee to express your concerns, please email our staff contact, Daryl Bender, and ask to be placed on the agenda for the next meeting. He may be reached at:

All these issues are currently being addressed by the Committee as we are providing input into the Cycling Master Plan revision.

Wait, what? They're talking about getting rid of the 403 bridge bike lanes? I thought they were only thinking of Dundurn/York ones. Link?