The Push is a film about how institutions don't keep up and about how much those enmeshed in the political processes avoid transparency and accountability.

Last fall we opened a film called The Push at the Hamilton Film Festival. Raise the Hammer described it as a "far-ranging examination of Hamilton's toxic political culture" and the headline in The Spectator read, "New film raises bothersome questions about city hall culture." 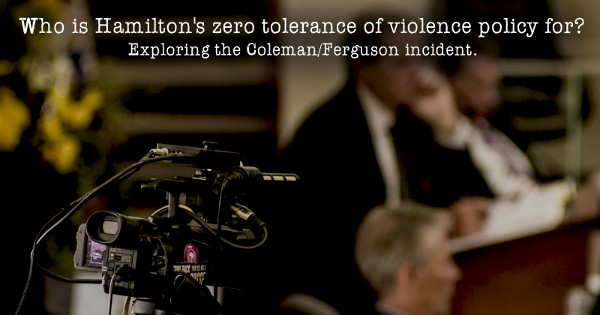 The debut of the film was an important goal for us, and we felt deeply proud of the issues raised in it. We also found the release of two films within one month (particularly this one and the hubbub surrounding it) hugely stressful, so we set the film aside for a bit.

Death threats set the film aside for a bit.

The making of a film that only a few hundred people had seen was interfering with our ability to work with community organizations in Hamilton to volunteer our time and skills as we often do, so we set the film aside for a bit.

We realized having made the film was messing with a bunch of jobs we'd normally have gotten, so we set the film aside for a bit.

We discovered that just being in the film could mess with people's working lives and that even eight months later there were weird machinations of vengeance happening that needed some time and space to sort out, so we set the film aside for a bit. A year had gone by.

Then we realized that people who had never seen the film and ultimately shouldn't have such silly power over such a thing were dictating what we did with it. So, we decided to release it.

We like to look at it as a good case study of two things: the importance of independent journalism, and how screwed up things are within City Hall in Hamilton.

This has never been a film about any particular councillor, and our intention in releasing it isn't rooted in re-raising an issue from the past. We strongly believe that people who haven't seen the film have a mistaken impression about the film and our intent in creating it.

Looking at how our city, nation, and world function, it strikes us that any in-depth analysis of the machinations of those in power illuminates the same basic issues. This is an example of such, and not at all created to attack, so much as reveal.

It's a film about how institutions don't keep up and about how much those enmeshed in the political processes avoid transparency and accountability. We think it's an important look into how things still function in Hamilton.

A couple hundred people seeing the film resulted in a lot of hubbub and a little bit of change. So, we're going to give it away for free for a day - the deal being, if you like it, tell other people that they should watch it.

Ultimately, we made this film so that we could understand why one of our local journalists felt the need to leave the city after what seemed a straightforward incident that should have resolved itself and; in doing so, discovered that our local bureaucracy is more of a mess than we ever imagined.

The Push is our civic offering to you.

We will have a free online screening this Sunday, December 11 on our website: http://pushmovie.ca/.

Zena Hagerty is a filmmaker at HamiltonSeen and a singer-songwriter in Sublimatus.