Public transit is a public good. It improves health by reducing air pollution and encouraging people to be more active. It's a leap ahead for safety, as you are ten times less likely to be in a collision when using public transit than you are when driving. 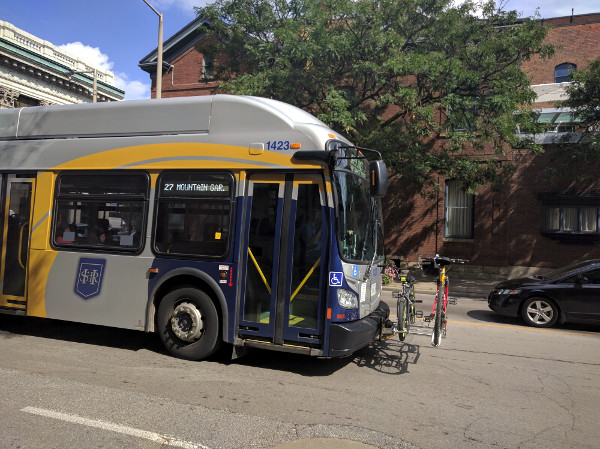 It can help citizens save money on transportation costs, and studies show that every dollar invested in public transit produces an average of four dollars in local economic benefits.

Taking transit is considered one of the biggest changes you can make to reduce your contribution to climate change, and filling seats on buses also reduces traffic congestion for drivers. There's a lot there to be glad for.

For anyone following Hamilton's tumultuous journey with Light Rail Transit (LRT), raised voices on the subject have distracted from larger transit issues. When citizens made delegations to city council at a recent General Issues Committee meeting on the LRT, it's telling that those in favour and those against both spoke about the need for improvements to the Hamilton Street Railway.

Anyone dependent on the HSR will surely agree that it needs work. It is currently the slowest growing transit system in Ontario, with per capita ridership actually dropping while other cities see double digit growth.

It's not hard to see why. Adjusted for inflation, the city's total budget for transit in 1994 was the equivalent of $83.85 million in 2016 dollars. By 2005, that was down to $61.15 million in today's dollars, and 2016's HSR budget was smaller still, an anemic $59.02 million. Regular fare increases haven't been enough to offset this functional decline in support from the city's coffers.

It makes the increasing number of drive-bys, when a city bus races past your stop without slowing down because there's no room for another passenger, begin to make sense.

For more than a quarter century, city councils have steadily underfunded transit, even while the official transportation plan calls for efforts to grow transit use and decrease our reliance on single occupancy car travel for getting around the city.

Typically, when a city really sees the value in something, they invest in it.

Area rating may also play a role. If Ancaster wants a new bus, Ancaster taxpayers have to pay for the whole thing themselves rather than having the whole city's tax base contribute to it, making improvements difficult.

This lingering holdover from the city's forced amalgamation decades ago still pits Hamilton's urban and rural wards against one another in a way that divides no other Canadian city.

Unlike many other challenges, this one has at least one convenient partial solution.

Municipalities receive a portion of federal gas taxes, which are intended to fund efforts to provide cleaner air and water and reduce greenhouse gas emissions.

Vancouver, Calgary, Toronto, Edmonton, and Ottawa have dedicated most of it to their transit systems, making them more robust.

Of $155 million in gas taxes Hamilton received, a mere $6 million has gone to the HSR, with $78 million spent on road construction.

If Hamilton directed Federal Gas Tax money to improving the city's transit system it could help bring the HSR back to the strength it once had, arguments about where the money for improvements is going to come from would be avoided, and we could all see how improving transit overall encourages investment and helps create a stronger, healthier city.

It should be noted, however, that gas tax money cannot be spent on operational costs, like driver salaries, but can be used on capital costs, like new buses, making it a powerful first step.

Making this happen is the first goal of Environment Hamilton's ambitious new Fix the HSR campaign.

You can sign an online petition urging Hamilton City Council to increase funding for the HSR using the city's portion of federal gas taxes here, and they welcome engaged citizens to work with them to form a ridership movement to advocate for other improvements in the way Hamilton gets around.

Environment Hamilton also encourages you to tweet that you want to #FixtheHSR, and welcomes transit stories, concerns, suggestions, and most particularly anyone who might want to volunteer to help move Hamilton's transit forward, to email: FixtheHSR@environmenthamilton.org.

If anyone doubts the various claims in this piece, here are some links to back me up.

“you are ten times less likely to be in a collision”

“Vancouver, Calgary, Toronto, Edmonton, and Ottawa have dedicated most of it to their transit systems”

“Of $155 million in gas taxes Hamilton received, we spent…”

The other day there was a hilarious moment in council where staff were asked if there was a bus up the claremont access... and nobody knew.

I work at HGH. Believe me, all my coworkers who commute down the mountain know there's no bus there. If they wanted to take the bus they get to take a bus to downtown and then hop onto the Wonderbus #2. Meanwhile, they can drive the Claremont and be here in a blink.

I keep hoping the HSR will start talking about their plans for what post-LRT routes will look like, but every announcement we hear from them sounds like "plan new routes? That sounds like work".

That was very funny Ryan, sole destroying to a degree yes, but funny!

When the O-train Line was originally being debated here in Ottawa back in the 1990's a councilor like your councilor Skelly asked how trains travelling in opposite directions get around each other on the single track railway line that they planned to use. The councilor was told, passing tracks would be installed at key stations. He then asked how the train would actually access the passing tracks. The staff member answering the question assumed that he was asking about signaling for the line or the operational parameters around which train would get the right of way. The staff member exhaustively answered the question. The councilor then replied in an almost homicidal rage screaming at the planner for not answering the question and wasting everybody's time. With everyone in the council chambers looking around in both confused and amused embarrassment, towards the councilor's tirade at the planner, one of the other councilors spoke up and said, "John, you do realize that the train uses a switch to access the passing track right? It just doesn't jump over to the next track like a cartoon character!"

The reaction on the councilor's face was one of confusion. The staff planner said that "switches", or more precisely the proper technical term "turnouts", would guide the trains on to the passing tracks. The councilor then doubled down asking how reliable these turnouts were and then stating that, "new technology like this would only make the line more expensive"! The councilor was told that turnouts had been in existence for over a 140 years by that time and although they can freeze in extremely cold weather, they are completely reliable and have been so for a very long time. This councilor, one of the O-train's most ardent critics admitted later that, he knew virtually nothing about trains even though they had been debating this subject in council for months by this time. When the information reached the public about this councilor's complete lack of knowledge around anything to do with trains and railways, the councilor's office was virtually berried under an avalanche of "Thomas The Tank Engine" videos and a another children's series of books which was very popular at the time, explaining to little boys and girls how the big trains you see in city work!

Exhaustively. But without mentioning switches. Both of these things can't be true. And I doubt that he replied in an "almost homicidal rage." He probably raised his voice a bit. But of course, if that were the case, then your story suddenly becomes 1. Not interesting 2. Mean spirited. Everyone has natural gaps in their knowledge. In fact, this councilor was trying to rectify just that by asking questions. Which leads us back to the staff and his "exhaustive" answer which conveniently left out the most important detail. At any rate, never shame someone who wants to know more.

I'm picturing people dropping off VHS tapes of "Thomas The Tank Engine" and actual books and letters to the degree it looks like a hoarders paradise.

Something you can't (easily) do anymore with email and twitter.

Thanks for the visual!

This is an amazing story. Thank you for making my day.

I live in Ward 15 not Ward 14 ,however, feel highly offended that the author chose to designate Ward 14 as unworthy of having a say in City business! Like many current Wards that contribute to our bloated organization called Hamilton, we had no chose to be part of it. Trust me, the Amalgamated Wards, if combined without the original old City, would run a much more efficient community than this current highly overstaffed model. I won't bore with statistics but this City needs a huge look at Public Service employees levels, what they do, what is redundant & what Department Heads ignore as it's much easier than fighting with Unions & no upside to Department heads for doing it. Brampton is a prime example of hiring a house cleaner & is cleaning house of many who years ago stopped adding value to City business! Happen in Hamilton? Doubt it, our Councillors don't have the Political courage.

I don't think it's right that the councilor of a ward that forwards zero dollars in transit levy has the ability to vote on transit issues. A ward that pays nothing can, for example, vote down a bus lane over those wards whose constituents pay hundreds of dollars each? That is crazy unfair. That has to change. They aren't paying for it why can they vote on it?

I say we compromise. Those wards that pay nothing can keep paying nothing as long as they are excluded from any transit related vote. Or, we all pay the same and we all have an equal vote.

No representation without taxation!