Hamilton is Somewhere, and its Citizens Are Worthy of Light Rail

LRT is a hopeful vision for the city we love. It looks forward and trusts in Hamilton's ability to survive the challenges of the construction period, and make the most of this transformational project.

The following is the text of my delegation to the October 25, 2016 General Issues Committee meeting on Hamilton's Light Rail Transit (LRT) project.

My name is Mary Louise Pigott. I live in ward 1 and my husband and I own Hamilton Scenic Specialty Inc. in Dundas, fabricating scenery for the entertainment industry. We've produced scenery for Broadway, Las Vegas, London - England and Ontario - and beyond, all shipped from our shop in the shadow of the Dundas peak.

We've been able to compete with the biggest scene shops in North America because of the tremendous talent pool we have here.

While LRT won't service us directly, we are strongly supportive of council's pursuit and ongoing implementation of LRT, and grateful to the province for fulfilling your request for full capital funding.

It's important to remember that, not only is this first phase of the BLAST network not just about the lower city, it isn't even just about Hamilton. The route may have changed a bit from the route you initially requested funding for, and it's regrettable that it isn't going all the way to Eastgate in this first phase.

As a business, as parents, and as citizens, we are very concerned about the mixed messages we are hearing from some members of council. With Waterloo and Toronto working collaboratively to build a tech corridor, I worry about Hamilton being left behind enough as it is.

Rejecting LRT at this point, and gifting a competing city with our rapid transit dollars, would send the message to business and other levels of government that we are not a serious, stable city in which to invest.

As a parent, I just don't want Hamilton to be a great place to raise a child, I want it to be a great place to keep a child. As the parent of children who show little interest in driving, let alone owning a car, I can tell you that higher order transit will be one of the key factors in attracting and keeping the talent in this city that we need to compete and thrive regionally and globally.

But enough about me. In addition to being a business owner and parent, I am also a citizen, and it's in that capacity I'm here today. I'm involved with several grassroots organizations and initiatives in my city and neighbourhood, and I am here today to present a petition on behalf of a very informal, ad hoc group of citizens, some of whom are members of the LRT advocacy groups Hamilton Light Rail and Hamilton LRT, and some who are not.

We know from our involvement in a variety of organizations such as neighbourhood hubs and other groups, that support for LRT is enthusiastic and widespread, and wanted to send council a message of support in advance of this important meeting. We felt a petition was the best way to accomplish that.

Today, I respectfully submit this document of the first 1,200 signatures of people who signed the petition for LRT.

In the same 100 hours that we received 1,200 signatures, we also received over 400 comments. I'll give the final word to Chris Brown of Ancaster. 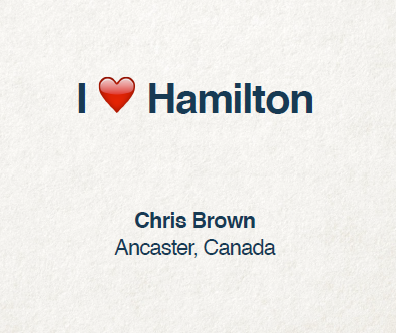 I love Hamilton too, Chris. LRT is a hopeful vision for the city we love. It looks forward and trusts in Hamilton's ability to survive the challenges of the construction period, and make the most of this transformational project. Hamilton is somewhere, and its citizens are worthy of this investment.

Mary Louise Pigott is an armchair urbanist and founding member of the Useful Knowledge Society, whose passion for urban neighbourhoods and public spaces occasionally moves her to write.

A delegation from the NOLRT side was going to present a petition of about 412 signatures received over about 3 months. This delegation declined to present once they got wind of this petition.

The Supercrawl 2016 paintings showed an ambundance of being for LRT or open-mindedness.

The petitions gain signatures much faster on the YES side rather than NO side.

The pro-LRT Facebook/Twitter feeds are much bigger than the no-LRT equivalents.

The spectator seating in City Council Chambers was overwhelmingly #yesLRT on October 25th.

Hamilton is #yesLRT, to the point that even a referendum would win -- but a referendum is not necessary and a waste of money given the repeated voting towards LRT. Yes, I respect that while neighbours on a street may be mostly NOLRT, there are other streets of which where most residents are #yesLRT.

Let's fix the flaws in the LRT + expanded bus fleet plan instead of wasting money on NOLRT.

Anecdotes aren't data. Are you able to point to an Angus Reid poll perhaps or something equivalent? I'm not aware of one. Genuinely curious.

Do you have data to back up that the citizenry at large are against LRT? It's easy to ask others to provide data to support your claim while not having to provide any of your own.

From what I have seen, the NoLRT group talks a lot of talk, but is really just full of hot air and sticking their signs on the back of road signs, around telephone poles, etc., throughout the city. I haven't seen a single YesLRT sign stuck on post or sign like this, just in windows of homes and businesses.

last mayoral election was an LRT referendum in the same way Christopherson v DiIanni was a Red Hill referendum. The results were extremely clear.