Being magical, seemingly without effort, takes a rare combination of natural aptitude, opportunity, and an unfailing, unfaltering, unfeigned, unfettered, unflagging commitment to craft. 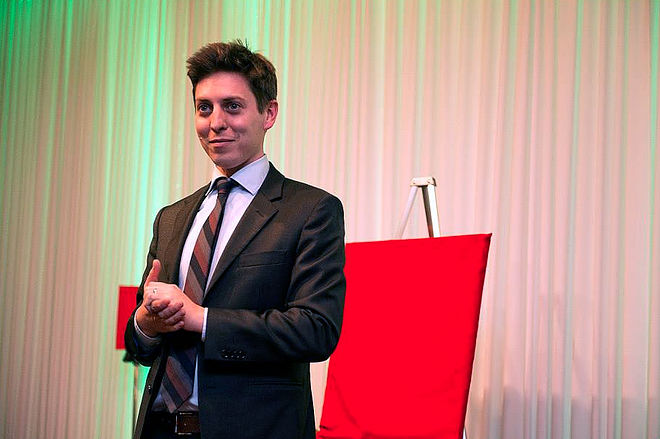 Magic is wonderful and magician Nick Wallace is magically wonderful. His fascination with magic, which might be in his DNA, was triggered early. Nick's grandfather was gambler and, while very young, Wallace found, studied, and played with his marked cards.

Nick had his first magic performance at five. I've seen him perform several times and between conjuring, illusions, and ye olde school card tricks, each show has been a mind-bending delight.

It's a responsibility to introduce my girls to excellence, possibilities and magic, so we go to Nick Wallace shows together. Our younger recently said, "He makes me want to learn magic."

Being magical, seemingly without effort, takes a rare combination of natural aptitude, opportunity, and an unfailing, unfaltering, unfeigned, unfettered, unflagging commitment to craft. When I asked Nick how he pulled off a particularly fascinating trick, he smiled and said he took the same path as those playing Carnegie Hall: practice.

Nick is working on a new show, tentatively titled, "Upstairs." Once again, he is collaborating with Luke Brown, as they continue their venture into combining magic and theatre. Luke, who works at Theatre Aquarius, is as committed to his profession and passion as Nick is to his. On his phone, in very small font, Luke keeps an index of all the shows he's seen. I asked to see it, once, and he scrolled for a week. Holy expletive.

Luke and Nick are about the same age, look alike, and share similar senses of humour and possibility. They make a nice team. Their last show, Séance, was a theatrical re-enactment of a real séance, using Luke theatrical proficiency and Nick's skill with illusions to create an unnerving effect.

Dramatically, they gave a brief history of séances and told scary ghost stories, setting a spooky scene. Then, they turned down the lights, and let Nick do his thing in pitch dark. It scared the spirits out of people.

Nick said, "On the first night, a lady freaked out so bad, I thought I was going to have to stop the show." My daughters, who refused to attend a second performance with me, still talk about how frightened they were. Jessica Anderson, a bright, brave, award-winning playwright, said, "I had to sleep with the lights on for a week."

Contrasting Séance with their new show, Nick, a father of two happy little boys, said, "I wanted to lighten things up."

The father of two terrified teenage girls said, "I get it."

Starting this Wednesday, Sept 14, there will be a performance of Upstairs for six consecutive weeks at The Staircase Theatre. Each Wednesday, the shows, which start at 8 and go for 75 minutes, will feature new magic, but include tried and true material as well. Luke said, "It will never be the same show twice. We're playing in a small venue, so people will see the illusions close up, intimately."

Because Nick and Luke will be experimenting with new tricks and magic requires an audience, they see the six week run as a workshop opportunity. "You can practice all you want," said Nick, "but you need to try it on people to see if it really works." The shows at The Staircase are part of Upstairs' development.

"We're definitely looking for feedback," said Luke. They encourage audience members to have a drink after the show and say hello; they'll be mingling.

For those who haven't been, the Staircase is wonderful, whimsical venue with good food and great beer. Enjoy some magic, have a treat, a drink or a sweet, then stick around for a meet and greet. There's a night that can't be beat. And to think that it happened on Dundurn Street.

Evidently, The Staircase is a terrific venue for performers as well. Luke said of the manager, "Collette's been amazing - helpful and accommodating. She's great to work with."

Similarly, it was a pleasure to sit with Nick, Luke, and Beer to talk theatre, magic, Upstairs, and have my brain rearranged by Nick and a deck of cards. Nick's tricks are incredible, but I've only ever seen him perform from the back of theatres, where I usually try to sit, in case of fire or bomb. We talked for a while, then I couldn't help myself and asked Nick if he'd perform magic for "eagle-eyed" me.

Affable Nick smiled and said, "Sure," but on the inside he had smacked his chops, put me on the menu and in his crosshairs. Nick whipped out a deck of cards and went to practice. Sitting across the table and watching Wallace, ostensibly like a hawk, I was determined not to be caught in his magical talons.

By the time he was done with me, I felt like a dim-witted mole who'd challenged a magnificent bird of prey to a kill fight. I picked cards, put them back in the deck, then, somehow, those cards ended up under various cans of Beer, right in front to of me. I looked at Luke, beseeching help from the cerebral assault I had egged on. He only laughed and shrugged. Holy expletive.

There's plenty more where that came from and Upstairs is sure to be a pleasure. "It's meant to be fun and playful with a laid back tone," said Luke.

Nick added, "It's geared for adults, but is OK for kids, too. It'll be great for a date night."

Here's a short clip of Nick at magic:

I'm looking forward to Upstairs. And, so are my girls. "It's not scary, is it?"

"No, Darling, it's magic, wonderful magic."