As you roll down the gently sloped path, friendly strangers of all ages pause from their walking and running to flash a smile or a nod, sometimes even a 'Hello!'

Imagine you're coasting effortlessly down a gentle slope. There's a cool breeze washing across your face - just enough to keep you comfortable in the mid-July heat. You're surrounded by tall, lush trees that slip by you on either side just slowly enough that you can momentarily appreciate the ageless crests and cracks in their bark, each one giving that tree its own uniqueness. 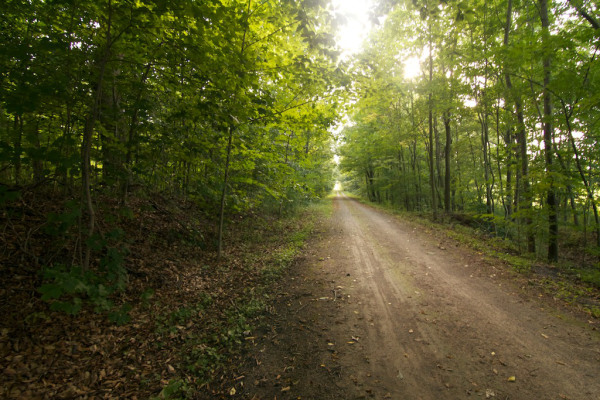 A clearing appears on the right, and the trees give way to a breathtaking view of a post-industrial city far below. Little rows of symmetrical homes dot the grid-shaped streets, a distant reminder of the electric streetcar network which once served these neighbourhoods.

Down below, beneath the mesh of century-old trees which cloak the neighbourhoods, you can even make out a child playing in the street, his high-pitched laughter cutting through the summer haze.

As you roll along, your gaze rises upwards past the brick homes and smoky factories, and meets the distant skyline. From here you can see whitecaps out on the harbour stirred up by the wind, a welcomed thing for the many sailboats drifting through the bay.

Further beyond, the landscape is defined by a single prominent escarpment, the only thing to break its perfection being the few roads which have conquered it. Though one road in particular has to be more than a dozen miles away, you can still make out the cars and trucks, slowly but surely making the climb like a trail of ants, their noise and disruption blissfully forgotten from this distance.

The trees re-establish their embrace to either side, creating a pleasant canopy that allows no more than small pockets of sun to reach the ground, which joyfully dance across the trail in front of you as the trees sway in the breeze.

As you continue rolling down the gently sloped path, friendly strangers of all ages pause from their walking and running to flash a smile or a nod, sometimes even a "Hello!" Though you expect you'll never see them again, their gestures fill your spirit with warmth, as your sense of community in this place is further strengthened.

You take a moment to silently express gratitude for the long-passed engineers and builders who carved out this path, once for an escarpment-climbing railway, and now simply for the enjoyment of yourself and all these fine folks.

At the next break in the trees, the dotted homes far below on the right give way, first to moss-covered brick low-rises, then eventually to aged, brownish apartment towers, whose tips reach out into the sky, stubbornly defying the confines of the city below.

Full of "character", as the locals might say, these towers are certainly not of the stature of the shiny steel-and-glass ones found in the neighbouring city, but they define the community of which they are a part. Their balconies contain a lifetime of built-up belongings with no further place to go, their owners feeling a little bit of the same as rent prices climb steadily higher, always higher.

Continuing on, the trail now finally begins to converge with the previously far-below city to the right, nearing the lowest point and end of its span.

Another rail line, this one still active, joins you on the right. Though there's no train passing at the moment, you swear you can make out the distant whistle of an approaching locomotive as it exists the century-old stone tunnel not too far ahead.

A hobo's haven, this stretch of track is just discrete enough to set up camp and keep a stash of useful junk, while still being a just a short hobble from the heart of the city.

On the left this time, as you travel along, a high-pitched flock of shouting and laughing gives way to a (mostly) grass-covered soccer pitch full of kids of all ages, left to experience the joys of youth by their trusting parents. After all, their parents certainly didn't grow up being coddled and attentively supervised - tough times, recession and depression formed grit and independence, two defining traits of citizens of this place.

Finally, though you wish it would just go on forever, the trail comes to an end as the fine black asphalt meets the aged, patched and battered local street.

Before dismounting your bike, you recall the name of the neighbourhood - Corktown - and wonder how such a place got such a name. But to you, the place isn't Corktown, and it's not Hamilton. To you, this place is known as Home.

This article was originally posted on Matt Pinder's personal blog, Moving Beyond the Automobile.

I enjoyed this article. However as someone who rides this trail at least 4 times a week I must take issue with the characterization of the "freindly strangers". I make a point of greeting everyone I pass on the trail and estimate that barely one in ten returns the courtesy.