Getting to Turnover in Renaissance City, Part 2

Round two at the Landloard and Tenant Board unfolded much as the morning session had, except that everything was a touch sharper, a little more intense.

This is the second part of a three-part series. You can read part 1, part 3. 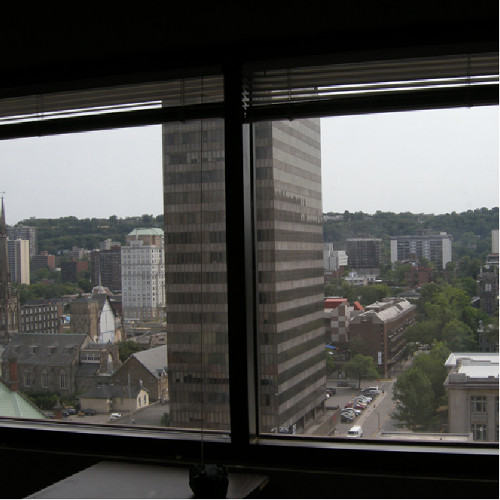 View from the Landlord and Tenant Board hearing rooms, Fairclough Building.

Raymond Pasche is a slight, intense individual whose voluble English caries a faint trace of Dutch. He regards the exactions of Northview with indignant incredulity. His partner, Harinder, is less demonstrative but equally offended.

Going into the afternoon session at the Landlord and Tenant Board, the disposition of the application concerning 150 Market, Pasche planned to take a different tack than Dylag.

His argument was not that a portion of the landlord's claim was not properly capital expenditures (although he did assert that too), but rather that much of the work was so sloppily done that no-one should have to pay for it - and he had brought along a binderful of photographs to prove it.

On obtaining his copy of the AGI application, Pasche had gone over the list of expenses claimed item by item, and then went around the building checking each one.

On a tour a couple of weeks before the hearing, Pasche showed me hall doors painted to the frame, but not to the edge of the door itself; new paint gone missing in ragged patches everywhere, because it had been applied without preparation of the receiving surface; and the piece de resistance, the laundry tubs that weren't there.

According to the invoices, Pasche explained, Northview had paid for the purchase and installation of a stainless steel double sink in the laundry room. Nothing of the sort occurred, and a pair of well-worn plastic basins still sit where they have been for many years.

Pasche had gathered signed forms from fourteen other tenants, authorizing him to represent them at the hearing, which he presented to the new dispute resolution officer, Laura Rossiter.

Brendan Jowett, the legal clinic lawyer, had returned for the afternoon, and he now asked the room if people were content to have Raymond speak for them. Most were familiar with the Pasches, having attended information meetings organized by them and Steve Dylag by going door-to-door in their respective buildings.

Round two unfolded much as the morning session had, except that everything was a touch sharper, a little more intense. To begin with, the increase sought was a whopping 7.6 percent over three years for 83 of 110 units, a figure that came as a surprise to the Pasches.

They thought they were contesting a three percent rise - and so they were, in the first year. But Northview also wanted a further 3 percent the following year, and another 1.6 after that - all this, remember, on top of guideline increases of 1.6, 2 and some unknown percentage yet to be determined for the third year, 2017.

(In order to know with accuracy in advance of a hearing what the landlord is asking for, it is necessary to go to section 26 of the regulations accompanying the Residential Tenancies Act.

There you will find instructions on how to do the arithmetic, which involves, in part, figuring the weighted useful life of expenditures in a variety of categories, averaging these, and amortizing the summed averaged costs using the chartered bank administered conventional five-year mortgage rate in force on the last Wednesday of the month before the month in which the AGI application is made.

This last is easy enough to look up, but the whole calculation is not an easy one to make, as I can attest after several attempts, none entirely successful.)

Rossiter, like her counterpart earlier in the day, went over the rules governing claims based on capital expenditure, and itemized Northview's spending: building envelope and balcony paint, boiler room retrofits, plumbing fixtures, and common area renovations to the lobby and the corridors.

She conducted the proceedings differently than Jameson had in the morning. She brought Cappa and his entourage into the hearing room, demanding that non-parties step out, and had Cappa discuss matters with Pasche before the assembled tenants.

This went on for half an hour, during which Pasche managed to cause the landlord's reps some embarrassment with his carefully-prepared collection of photographs. Cappa then withdrew, and the tenants debated among themselves what to do.

Jowett was of the view that the arguments to reduce the common areas claim were strong, and recalled for us that the plumbing fixtures had been removed from the 160 claim that morning. In a hearing, the Board would likely be very reluctant to cut the 7.6 percent request down to 4.6 percent.

On this basis, after a few minutes of discussion, the room agreed to try Cappa on 3.6 percent, and Rossiter went to relay this to him. She returned with a counter offer of 6.5 percent, which meant, she said, that the other side had taken a hundred thousand dollars off their claim, something she had never seen before.

It was becoming clear that Rossiter was less than neutral, or if you prefer, that her first priority was clearing the Board's calendar, an impression that was strengthened when, seeing that there was some hesitation in the room, and a shift in opinion toward abandoning mediation to go to a hearing, she attempted to hurry us along by remarking "Time is money", and pointing out that, at this hour, a hearing would have to be re-scheduled for another day.

Can people take another day off? She asked. This was misleading. No one was obliged to attend in person if they were content to have Pasche and Jowett represent them. At this point, Rossiter also attempted to order the observers out of the room, but desisted when tenants objected.

Let's try 4.75, she was told, and while she was gone the room tried to set a bottom line: 5 percent. Above 5, might as well do the hearing.

Rossiter came back with an offer of 6, at which point Pasche explained that dealing with this application had been a lot of work, that he didn't know if he could do a hearing on another date, and certainly not without more help than had been forthcoming so far.

There was a vote, and six was accepted, though not unanimously. Six percent over three years: two, two and two. This came back as six, three, two, one, which raised a red flag for some of us and caused a good deal of shifting and muttering in the room. Rossiter, evidently thinking that non-parties were doing the muttering, which was not the case, again attempted to have them banished, and again was rebuffed.

The uneasiness arose from the perception that this distribution of the increases left room in the third year for Northview to come looking for another two percent, perhaps on the basis of improvements in the underground parking area.

Nonetheless, this became the settlement, and Michael Soo was shortly noting the terms in order to draft his order. These included, at the tenants' request, a commitment from Northview to consider making the main entry doors wheelchair accessible. 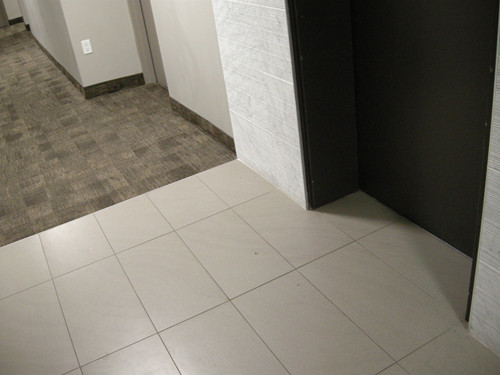 A couple of weeks after the sessions at the Board, I went over to Steve Dylag's place for a chat.

He met me in the lobby - all white tile on floors and walls, except for an expanse of sculptured plastic sheeting, also white, that was accumulating dust while ornamenting one side. The ceiling was lofty and the lights stylishly potted.

Dylag showed me around a little, pointing out the renovations that had been done: new ceramic tile at all the elevator landings, new ceiling lights in the corridors, fresh paint, new numbers on the doors...

These changes, while welcome if properly executed, are clearly, in the words of the RTA regulations, "work that is substantially cosmetic in nature or is designed to enhance the level of prestige or luxury offered of a unit or residential complex" and so excluded from a claim based on capital expenditure. Nonetheless, a claim has been made.

In any case, except for very new arrivals, the improvements stop at each door, and the apartment beyond receives very little attention.

Dylag is an actor and a teacher who specializes in imparting English to newcomers. The hours vary from month to month. "I was just about making it after I found this place," he told me. "Then they started with the increases."

He chose this building because it was close to the highway, only later discovering how central it was - near the market and Jackson Square and so on.

Less than a month after moving in, on January 2, 2015, he woke up to find water streaming down the walls and seeping out of the light sockets. A pipe had broken several stories above. (The rumour was that an angry tenant had moved out and left the windows open, causing the plumbing to freeze.) Fortunately, Dylag had yet moved in his guitars.

He was moved next door while the necessary repairs were made to the drywall and the carpet dried. This took until July, when he was given the okay to return to his unit, only to find that the painting was still not completed. (It should be noted that the flood and the cleanup occurred before Northview, as presently constituted, owned the building.)

A year later, it has still not been done. A glance upward shows large patches of wall and ceiling where the drywall repair has been primed, but never finish-coated. For the rest, the fridge is not antique; the stove is old but all the burners function. The sliding doors to the balcony are without screens, but Dylag has not gotten around to asking for a replacement either. 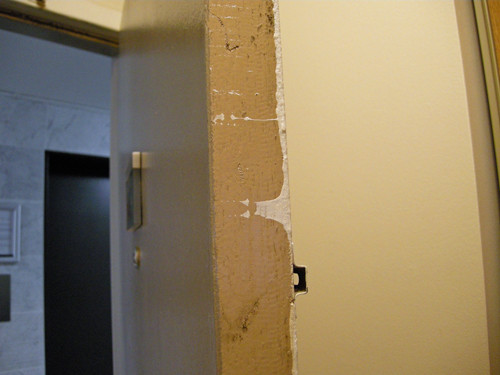 160 Market. The improvement line runs down the edge of each apartment door.

On the way out we went by the unusable gym, which is directly off the lobby. The rental office for all three of 150, 155, and 160 Market is also here. Dylag waved his hand as we passed. That too had been renovated, and he wondered why the tenants were paying for that.

Decidedly unrenovated was the gym, which featured an extremely ratty, water-damaged carpet and a partially dismantled and abandoned piece of exercise equipment. Things have been like that for some months.

It was a dispiriting sight, and not even poetically emblematic: the halls and doors that led to it were equally shabby and derelict, and these connected directly to the recently-beautified main lobby, so the comparative squalor of the gym was probably owing to ordinary old incompetence.

The budget didn't go that far, and no-one has since bothered to amend the oversight. Same with the empty sockets at the elevator control panel. These had been filled with silicon at one point, Dylag said, evidently in preparation for new buttons or caps, but riders had picked it out and nobody had ever come back for a second try. 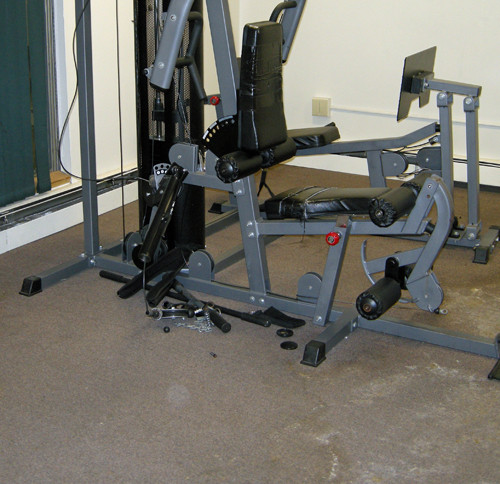 160 Market. Not so spiffy gym overlooked during common area improvements.