The stories of St. John and St. Andrew Presbyterian churches in central-east Hamilton are deeply intertwined, going back to the early history of Hamilton, even though the two congregations didn't formally amalgamate until 1984. 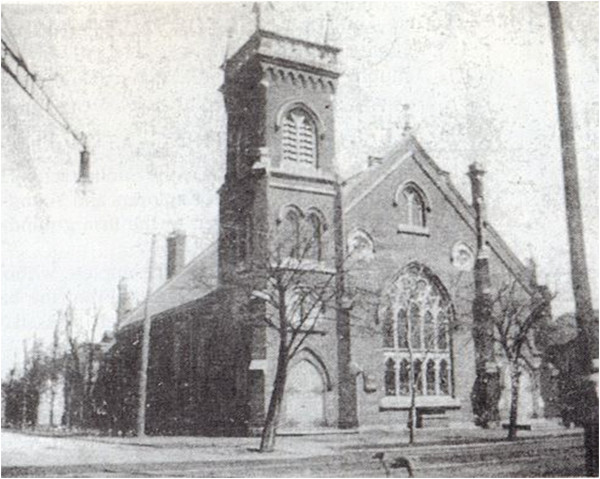 The stories of St. John and St. Andrew Presbyterian churches in central-east Hamilton are deeply intertwined, going back to the early history of Hamilton, even though the two congregations didn't formally amalgamate until Dec 31, 1984.

In 1849, the three-year-old City was gearing up for its first, and arguably greatest entrepreneurial triumph, The Great Western Railway, which would, in five years, lay its ribbons of steel all the way from Niagara to Windsor, in what was then known as Canada West and would become the province of Ontario.

A factory was set up to make construction equipment for the Great Western Railway at Barton and Wentworth on the outskirts of Hamilton's formal eastern border (Wellington Street), in the midst of weed infested boggy land, near where Westinghouse would make the first radio and toaster in Canada fifty years later.

In 1857, Scottish industrialist and shipper Daniel C. Gunn acquired this factory and started making locomotives for the Great Western, including the beloved 'Shem', the first train engine made on Canadian soil.

A small, simple church building was erected on the west side of Wentworth north of Barton Street where 281, 282 and 289 Wentworth Street North are located now. A manse was provided by Colonel John Land who lived in the Woodland estate on the east side of Wentworth. 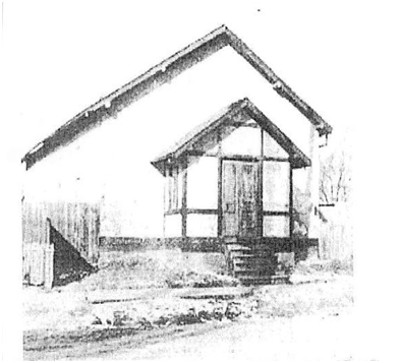 The Wentworth Mission had to be raised well above the soggy flood plain of the Sherman Inlet, just to the east.

The church, which came to known as the Wentworth Mission, stood on large cedar posts and was trimmed in brownish red paint. The rough-hewn pews were of yellow pine.

Gunn's Locomotive works would close in 1859 when The Great Western Railway consolidated its operations at the Stuart St. complex. However, a pork slaughterhouse took over the factory and provided work for the displaced workers.

In 1874, Knox, MacNab and Central Presbyterian churches bought The Wentworth Mission for three hundred dollars. The three congregations belonged to the reform-minded Canadian Presbyterian Church, which had doctrinal issues with the established Church of Scotland that St Andrews (St. Paul's) was affiliated with. 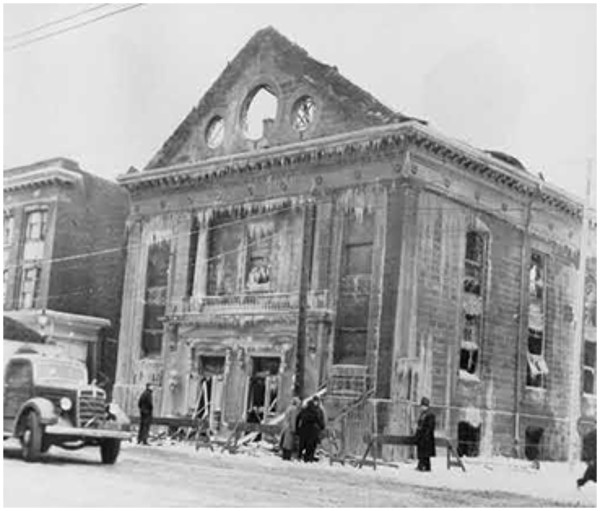 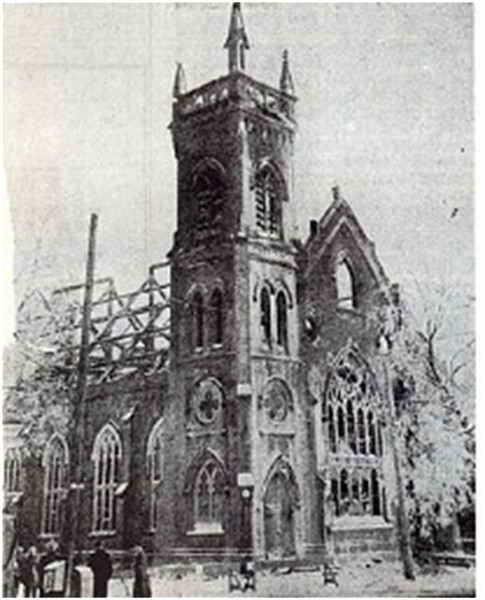 Knox Presbyterian (at James and Cannon) and St. John were both devastated by fire in 1940.

But the Wentworth Mission was unable to meet the needs of the many workers, and moved into what would become the Gibson-Landsdale neighborhood, Hamilton's primary industrial working class enclave.

A site at Smith Street and Barton Avenue was obtained and the first St. Andrew's church was built in 1885, which was greatly expanded in 1906 . Today a Spanish Pentecostal congregation occupies the sprawling complex of gracefully weathered red brick. 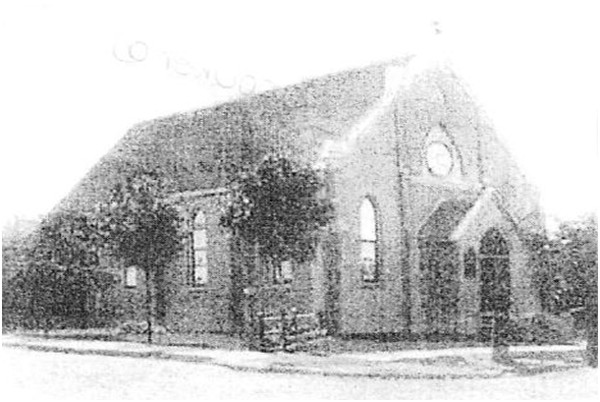 The corner of Barton and Smith in foreground has lost all of its former pastoral charm. The first St. Andrew's resembled the many basic Presbyterian churches found in small towns. and hamlets. 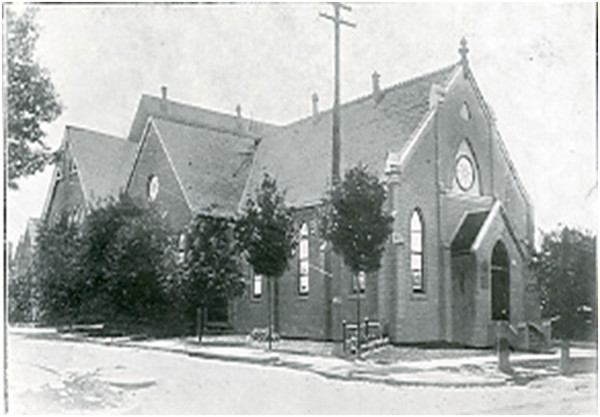 St. Andrews enlarged with two side wings. The short steeple will be the last feature added. 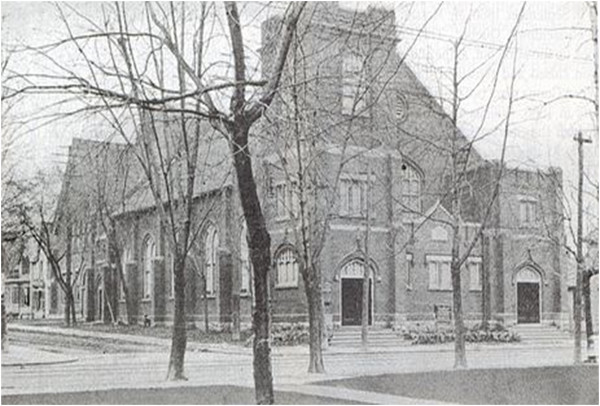 St Andrew's after its enlargement in 1906. St. Matthew's Anglican church is just of view to the right.

Another outreach of the three downtown churches was the building of a combined lecture hall and Sunday school at King and Emerald Streets on land purchased for two thousand dollars in 1874. This would become St. John Presbyterian Church. (The missing apostrophe was deliberate.)

The cornerstone for a church proper was laid in 1889 and on April 27, 1890 St. John was formally opened, with the principal of Knox College in Toronto, giving an address.

Demographics and social realities in Hamilton were rapidly changing. The middle class was fleeing the sooty inner city, for arguably what was the self-described Ambitious City's first suburb, which had extended its eastern boundary to Wentworth Street by 1870.

Posh homes were built along Main Street on land owned by the Stinson brothers. The Hamilton Street Railway (HSR) ran its newfangled horsecars on a single track of iron rail in this corridor.

Today, a grocery store and host of personal services are designed, planned and slotted in with every new subdivision that is built. But one hundred years ago, places of worship were a higher priority for the community.

The sprawling house at Tisdale and Main on left became The Gospel Temple.

The sprawling house at Tisdale and Main on left became The Gospel Temple. After the 1960s, a series of grocery stores and host of personal services started providing for resident's wholly temporal needs at this important corner, a stone's throw from St John.

Finally with St. John, the hardy and thrifty Scots got their own church. A congregation newspaper called St John's Magazine was published starting in 1894. By 1911, St. John had 611 members and was the sixth largest Presbyterian church in Hamilton.

However, during the night of January 4, 1940 fire reduced the fifty year structure to its exterior walls.

In November 1940, a rebuilt St John was dedicated and thrived in the tumultuous years of World War Two. A Couples Club was started. There were many youth and women groups.

However, thirty years later, the elemental force of fire, this time in the hands of an arsonist, destroyed most of the Christian Education wing and all of the Sunday school rooms.

But the congregation would not be deterred by this malicious macabre turn of fate and soldiered on. On Nov 3, 1974, St. John celebrated their 100th anniversary. On May 5 of the following year, Founder's Day was celebrated. 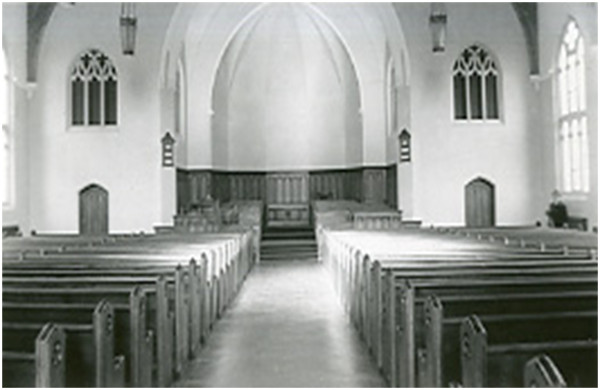 An early photo of the worship space of St John. We are looking south towards King Street 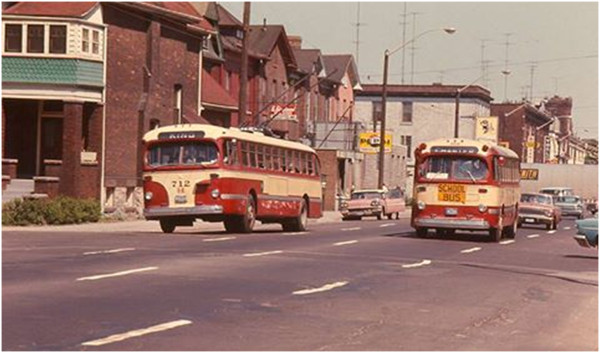 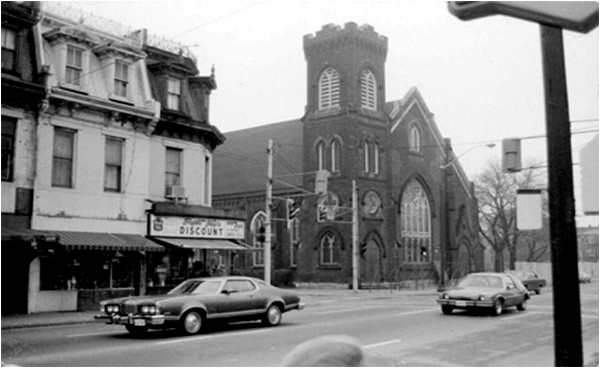 The above photo is of St John in the 1970s after the fire. An AMC Gremlin has just crossed Emerald on one-way King Street. The 'Centennial' apartment building just out of view on the left was completely renovated in 2016 as Gibson-Lansdale continues its economic and social revitalization . 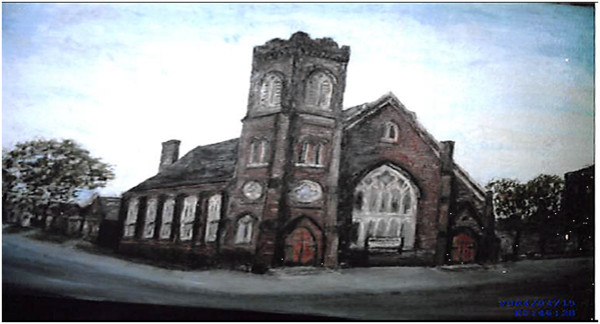 This fine old painting clearly shows the Sunday School and religious educational wing on the image of north side of St. John. The Evel Casket Company had the large coffin on the side of its building is at extreme right, where The Sons of Italy Hall is now.

When well-known and respected developer Tony Silvestri proposed building a new three-story church in the rear of a twenty-two story apartment/commercial complex he was proposing to erect, the St. John building committee decided to accept.

After a defaulted mortgage, the complex came into the hands of The Order of the Sons of Italy (Trieste Lodge), which in May 2016 assumed unfettered ownership of 20 Emerald North.

For two years, while the new reinforced concrete building took shape, the St. John congregation met at St David's on Wentworth Street North, north of Robert Land School and just down from the original mission church.

On April 17, 1977, St John's old and new cornerstone, which can be seen today from King William St. were laid together in a grand ceremony. Many of the furnishings, lights and windows from the old church were incorporated into the new modernistic styled structure. A new Shaw organ was installed in 1978.

In 1981, the third floor of the new St. John was completed and two years later a chapel was dedicated. A communion table was added from the now closed St. Andrew's on Barton, which had not suffered the repeated ravages of a primal force of nature, but suffered from the even more pernicious effects of rampant secularism. 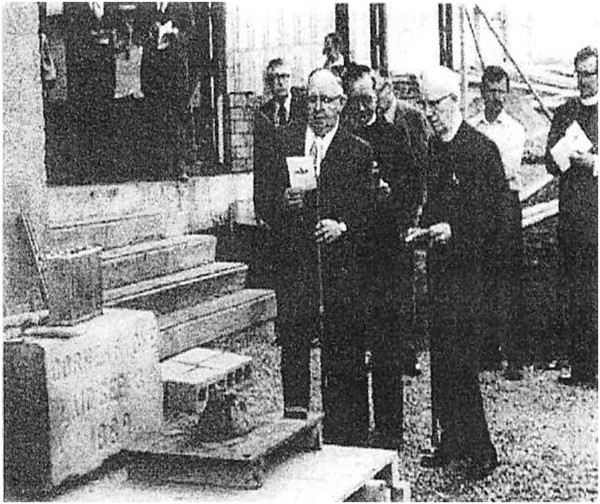 Laying together of the 1889 and 1977 cornerstone. It can still be seen at street level from King William Ave. Clerk of Sessions Gillis McKenzie is holding the dedication reading. 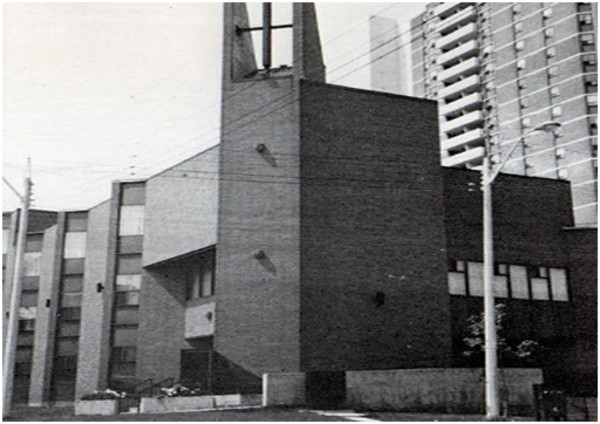 20 Emerald North, the home of many Landsdale residents, some of whom are also members of 'Church of St John and Andrew' looms over the new church.

However, the newly opened Redeemer College on Rymal Road provided energetic young people to carry on the pastoral outreach of what became The Church of St. John and Andrew.

As the Reverend T. Melville Bailey, Hamilton's preeminent historian and archivist for the Canadian Presbyterian church said, St. John went from being a mission church to a large prosperous mid-town church to an inner city church dedicated to helping the poor in its midst. 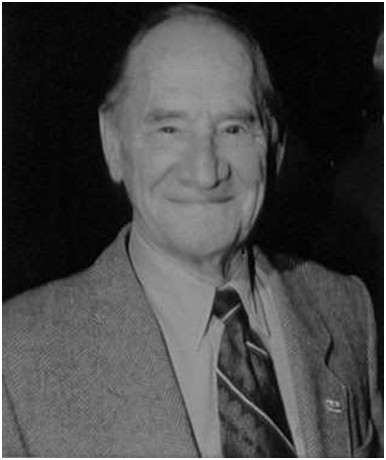 Reverend Bailey lived at 31 Davenport in Strathcona neighbourhood. Among his earliest works was a study of Dundurn Castle nearby. Bailey is one of the founders of the Head-of-the-Lake Historical Society and was editor-in-chief of the definitive four volume Dictionary of Hamilton Biography.

The Church of St John and Andrew had its last communion on June 19, 2016. One week later, the last service was held with a celebration at 3:00 PM.

Longtime St. John Place resident and community activist Stella Woock was active in the congregation to the end. George Beals, who started his ministerial duties in 2006 was in attendance at the last service.

As per the rules regarding closed churches, The Presbyter of Canada took possession of the locked Church. A plea was made by another dedicated congregant to keep the two sets of rosters and wall mounted plaques of the fallen soldiers in the two great world wars, who were members of the two churches, in the city where they were born.

Joachim Brouwer is a local history advocate, the secretary of The Friends of St John Place Tenants Association (where the old St John church used to be) and the Co-secretary of the Gibson-Landsdale Planning Team.