Before she was made into an icon for bystander apathy, Kitty Genovese was a colourful, vivacious, multifaceted human being. 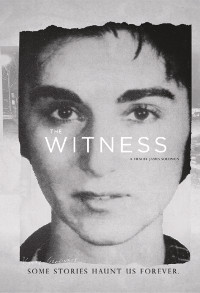 Documentary film The Witness is a riveting movie that introduces the world, for the first time ever, to the colourful, vivacious, multifaceted Catherine Susan Genovese. Better known to most as Kitty Genovese, this beautiful 28-year-old woman became the perennial icon for bystander apathy after her brutal attempted rape and murder in Kew Gardens, Queens, New York on March 13, 1964.

As with virtually all femicides, Kitty was lost in the media frenzy that followed. The Witness reminds viewers that power is concentrated in the hands of a few, or in this their case pens.

The New York Times published a front-page story two weeks after Kitty's funeral. The reporter claimed 37 people had witnessed Kitty's ordeal and that the murderer returned a total of three times over a period of 30 minutes to inflict multiple knife wounds. This incorrect version of the events was never fully investigated by other print outlets because the Times was such a well-respected publication.

The few individual reporters who became suspicious and uncovered inconsistencies and lies were not in a position to take on the media giant, so the door opened for other publications to take liberties with facts and quotes from witnesses.

The journalists and papers alike published baseless stories that created hype and sold copy. Convenient untruths catapulted the gross misrepresentation of the life and death of Kitty worldwide.

One of those most impacted by Kitty's death was Bill Genovese, Kitty's younger brother. Although only 16 years old when Kitty was murdered, Bill was so impacted by her death and the ensuing media blitz regarding bystander apathy that it charted his life's course.

During a phone interview with rabble.ca, director James Solomon, said, "The film is a sibling love story about Bill trying to reclaim Kitty's life. Bill is unravelling multiple mysteries surrounding the witnesses, the story itself, who his sister really was, and who was this man Winston Moseley?" Mosely confessed to murdering Kitty and spent the next 51 years in prison until his death in March 2016.

To avoid dealing with her death, Kitty's four siblings never discussed her life. Bill's tenacity finally broke the silence. Over the course of the 11 years it took to make this documentary, close to 80 people who knew Kitty were contacted. In the film we hear from a high school friend, workmates, neighbours, an ex-husband, a lover, the son of her killer, and her friend, Sophia Ferrar who held Kitty during her final moments and is the real hero of Kitty's story.

In addition to learning about Kitty's wonderful life, Bill gives us uncomfortable insight into the human condition. At least 38 people heard Kitty's screams for help during two separate knife attacks by the same assailant that spanned 30 minutes. Two men witnessed the attacks, but chose not to intervene or call the police.

We learn neighbours had ample time to contact the police, yet official records show only one phone call received long after the assault had taken place. Five witnesses were called to testify at the trial. Kitty's murderer had brutally raped and murdered another woman.

Bill encounters people who restructured the role they may have played in Kitty's death. They have fabricated stories they can comfortably live with. He also interviewed reporters and editors who stood by their disingenuous work by claiming it played a greater societal role by initiating conversation around bystander apathy.

The exploitation of Kitty became a noble lie for countering dissociation and social laziness. According to Solomon, "Bill reclaims Kitty's life. She is no longer a silent victim. This is his gift to his family."

Austin Street where Kitty was murdered remains virtually the same as it was over a half century ago. While researching for the documentary, Bill spent a lot of time on the street and in the neighbourhood. In a powerful scene, Bill recreates the aural sense of what happened during the early morning hours of March 13, 1964. What began as an empirical experiment evolved into a very personal and emotional experience.

Bill's journey to uncover the truth about his favourite sibling was a long and arduous task spanning 52 years. This is a man who possesses noble qualities, high moral principles, and showed grace in very difficult situations. Bill is a man who still loves his sister and misses her very much. Solomon observed, "Bill has found a level of fullness and a certain level of solace in finding out all he could about Kitty."

If you studied Kitty Genovese in sociology class at college or university, if you've read any of the media coverage or books written about her femicide, then you owe it to yourself to get to know the real woman. You need to witness Kitty as the intelligent, lively, affectionate, loving, funny, complex woman that she was.

femicide, homocide, underneath the