The Cannon Street Cycle Track has several cracks parallel to the direction of bike traffic that are large enough to grab a tire and cause a crash.

For some reason, the Cannon Street Cycle Track has several cracks parallel to the direction of bike traffic. In places they are large enough to grab a tire and cause a crash. 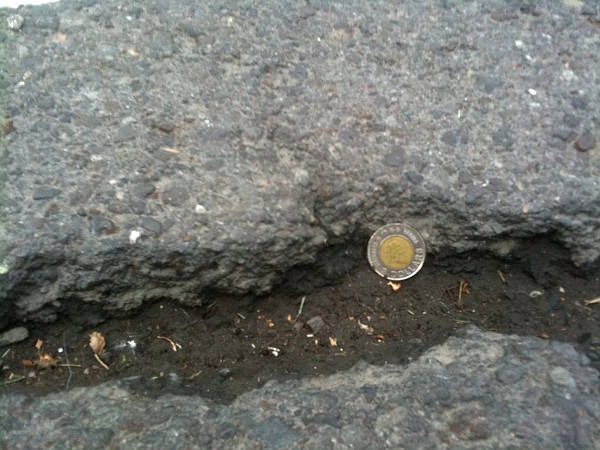 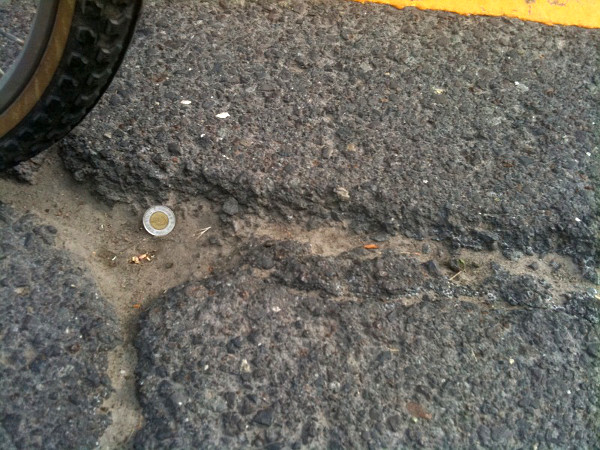 With my use of this track to get to James St N or West Harbour GO it is "a diamond in rough" that actually manages to get good ridership on good days, but ridership can be even better with better road condition, some do avoid Cannon due to the road condition.

I presume that a Cannon repaving is already scheduled -- are we able to find out what the planned schedule for the repaving of Cannon is? Reading articles elsewhere, I noticed that roads of similar condition in Hamilton often have something scheduled in the next few years, that road in 2018, this road in 2017, and the other road in 2019, etc.

Interesting.....if true, I wonder if this type of pavement will still crack under a bike lane over time without the weight of cars/ trucks.....

Why doesn't the city just use some of the road tax all of these cyclists pay...... oh, wait.

Another one whos misinformed to say the least.I ride and I pay the same taxes you do.Thank you very much.

He's right if he's talking about gas tax - part of that money goes to municipal infrastructure. Last I checked, cyclists do not pay this tax for using their bicycle.

Im pretty sure the gas taxes intended purpose is to be used for transit etc.

In any case, municipal roads are paid for out of property taxes.

Moreover, total fuel taxes don't come anywhere near the cost of paying for construction and maintenance of Canada's roads. (A very careful Federal Department of Transport study shows that federal and provincial net road fuel tax revenues and provincial fees cover only 50% to 78% of the total cost of the nation's roads.)

I've never seen anything suggesting gas tax was only intended for roads, it has often been used for other transportation infrastructure such as transit. And investments in transit benefit drivers by increasing the capacity of the roads (there is no way everyone could drive into Toronto!)

If you are paying "road tax", well ... we should talk about some land in Florida I'd like to sell you. Or maybe I could interest in a nice bridge connecting Manhattan to one of the more popular boroughs.

Really the city should just admit that since the Bike Lane has gone in Real Estate along Cannon has more or less doubled in value. Once the new assessments come in dedicate part of the increase to the Bike Lane maintenance. I would feel better about this than my tax Dollars going to improve rural ambulance service. Besides the rate things are going down here we could have a gold plated bike lane with snow melt technology !

Maybe some of the fired and rehired city workers could sell some asphalt to the chairman of the bike lanes or whatever city office looks after that sort of thing.

I know you guys don't like to hear it, but cycling doesn't do much ATM in terms of revenue for the province. By and large yours is a vocal minority, a headache, and doesn't contribute enough in terms of helping the environment (at least in your current numbers) for the province to have an incentive to help you or your infrastructure.

The country uses 2BN dollars/year (ish) on infrastructure - it all comes from motor fuel tax. You guys, as cyclists, don't contribute to it. The bike lanes, as such, can't be a priority.

Edit: Canada, of course, uses more than 2BN, but 2BN of the dollars come from motor fuel taxes - just to be clear.

I cycle and own a car. As for helping the provinces finances, look at how much is spent repaving and rebuilding roads annually in every city in Ontario.

Now imagine if we saw 5-10% mode shift towards cycling in our large/mid-sized cities. Look at how rarely a cycle path needs to be re-paved and rebuilt. Over a 50 year period it would be phenomenal to find out how many billions we would save by having less roadways and paths to rebuild year after year.

Also, cycling (like any physical activity) leads to greater health and greater awareness of health.
Again, let's go 50 years into the future, and you can be sure we'd be saving billions in health care costs province wide.

Many cities have seen their auto use remain relatively flat or even decrease as they've invested heavily into transit, walking and cycling. All 3 of those modes have proven good impacts on health due to the physical nature even something as small as walks to and from the bus stop have day after day.

The financial impacts of active transportation are known world-wide. Hamilton has fully embraced the car-only status quo and not surprisingly, we are going bankrupt and can't keep up with infrastructure repairs.
The answer certainly isn't to spend the next 50 years remaining a car-only city.

doesn't contribute enough in terms of helping the environment (at least in your current numbers) for the province to have an incentive to help you or your infrastructure.

Since when are basic infrastructure expenses predicated upon "helping the environment"?

I know you guys dont like to hear it but...just because you cycle doesnt mean you dont own a car,the two are not mutually exclusive.So there is that...