The bike lane designers were nice enough to give us poles and paint, but it doesn't matter - drivers never get it.

That moment you realize you've been caught on camera doing something you shouldn't...

I was cruising on my bike along Adelaide Street, Toronto, when I got snapped by a Toronto Star photographer. 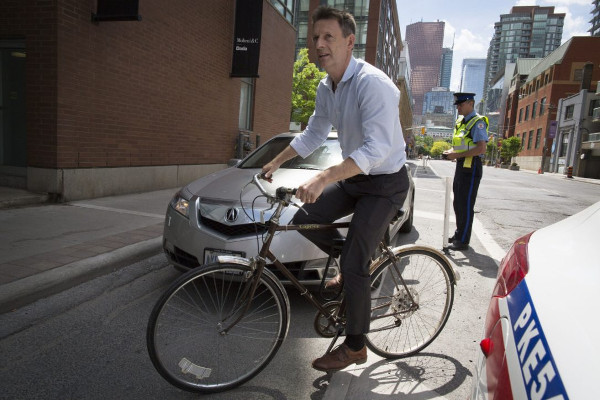 I was lucky - If the lens had shuttered two seconds earlier I would have had a vastly different look on my face.

Bike lane blockers are my nemesis. This idiot had the nerve to tuck himself right between the plastic poles. "Get out of the f------ way!" I screamed before weaving into the road and wheeling on my way.

Ever since the bike lanes opened along Richmond and Adelaide, I've been having to spill out into traffic, pedalling for my life. The designers were nice enough to give us poles and paint, but it doesn't matter - drivers never get it.

The biggest issue is the intersections: Cars don't know when to turn, so they wait until we cyclists are right up on their bonnet before yanking the wheel around.

My preferred route to work avoids these lanes at all costs - even though they're on my way. Instead I use a section of pavement and 200 yards of wrong way street.

Ah...Just another day biking through the streets of Toronto.

No kidding. If anything, it is criminal to call 911 because someone has annoyed you by breaking a by-law.

This is the most pro-cycling blog I know and even here everyone is like "whoa, settle down there, fella". That should be a hint.

Mr. Bulls alternate response could be to could slow down slightly, look over his shoulder, move over a bit and ride around the car. From the picture in the article, there isn't any traffic around that is going to murderously endanger his life. However, this would not make for a very good story.

To reiterate, do not call 911 in this situation. If you do, you are putting real children at risk that might be having an actual, life-threatening emergency.

Instead of taking the over-the-top nutbar approach why not just call police services? They'd be happy to issue a ticket and people will eventually learn.

Hopefully Toronto does this in their next Adelaide/Richmond reno in a few years.

I'm with Ryan on this one. Only an idiot proof design fix will work. Calling it in doesn't work because the scofflaws will be long gone. Regular enforcement would help - but the latest blitz is just that - a ticketing blip that won't last or result in any meaningful change. A better design is the only way to go. As with all successful designs, the ones catering to the lowest common denominator are the most successful.

(And yes, I wasn't 'pedaling for my life' in this instance but when it's Richmond Street in rush hour - yikes!)

a group of cycling activists will create an "awareness campaign". they will publicize the website where anyone can submit a photo of the make model and plate of the offending car. with a business card under the wiper saying "your car has been photographed and id'd. a photo of your plate and car has been submitted to a website to publicly shame scofflaw that are violating the bike lane laws. you are a hazard to public safety. please stop" if shaming isnt enough, i would think that after a few repeat offenders get keyed or have their windshields shattered, violations will decrease. we will see.

As a cyclist, these over the top responses are very disappointing and can only harm the good work that many people have done in making Hamilton a better place to ride. The general public can find enough reasons to bash cyclists without this type of response.

So far we've got 'call 911' and 'key the car and/or smash windshields' as solutions for illegally parked cars. Wow...