The Village of Porlock

With some careful planning and strong leadership, even poorly designed villages like Porlock can aspire to the rationality and clean separation of the Ancaster Meadowlands. 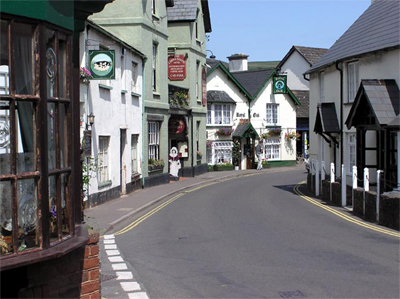 Like Douglas Adams' beloved Hitch-Hiker's Guide to the Galaxy, Wikipedia "has many omissions and contains much that is apocryphal, or at least wildly inaccurate". Also like the Guide, however, Wikipedia is cheaper than more authoritative encyclopediae and helps to quell panic among frenzied last-minute researchers.

Anyone can create or edit an entry in Wikipedia. This is part of its charm, but it contains pitfalls. You cannot exactly trust what you read in Wikipedia to be correct or even coherently written and edited, but it does provide a good place to start when researching just about any topic.

I found myself there not long ago, following one of the many Internet rabbit-holes that have helped to cancel out the productivity gains of desktop computing.

I had recently re-read Adams' Dirk Gently's Holistic Detective Agency (unrelated to the Hitch-Hiker series but equally clever), and was looking up the infamous Person from Porlock, who plays a pivotal role in the book's plot.

For those unfamiliar with the original story, Samuel Taylor Coleridge (1772-1834) is said to have awoken from a laudanum-induced slumber with the words to a new poem - "Kubla Khan: Or, A Vision In A Dream" - etched on his mind. Before he had half-finished the poem, a person from Porlock called on his house and detained him for an hour, after which time the rest of his poem had vaporized. (I won't explain how this ties into Adams' book, but I do urge you to read it.)

Porlock is a small, charming village in Somerset, England, and the Wikipedia entry on the Person from Porlock included the photo featured at the top of this article. I was immediately struck by how achingly beautiful this street is. On the heels of that came the realization that this urban design would be utterly unthinkable under today's regulations.

This led to an idea for a new occasional feature in Raise the Hammer: bringing traditional neighbourhoods up to code.

The street is far too narrow for safe driving, particularly around that corner. Also, the preponderance of retail establishments suggests that this ought to be zoned commercial. That means the private residences will have to go.

Those row houses along the right side must be demolished. That will make room for a proper lane of traffic in each direction, plus a left turn lane in the centre. Anyway, who would want to live that close to retail?

The pub in the left foreground has no sidewalk in front of it, and presumably no free parking spots for patrons. It will have to be bulldozed; the location would make an excellent candidate for a surface parking lot.

Unfortunately, because the buildings are so densely packed, it will be difficult to achieve the spacing that proper urban design requires. It may be necessary to remove every second building so that the remaining establishments can meet their minimum parking requirements.

This will raise property values. Everyone prefers low-density development, and it will reduce the strain on the municipal water and sewer systems.

With some careful planning and strong leadership, even poorly designed villages like Porlock can aspire to the rationality and clean separation of the Ancaster Meadowlands.

I love this new feature. You are absolutely correct: Porlock is a disgrace.

I guess if you like the Village in "The Prisoner", Porlock is ok...wake up, helloooo...Your pointlessness is exceeded only by your irrelevancy. Keep your tiny bigoted New Worldisms out of Hamilton. Not the Hammer, a cynical Lanois construction by the way.

old English villages, were never built for todays traffic, they never had the forethought of thinking beyond a horse and cart. Just love the quaint old English villages. If you don't like them, move to a city with traffic...ugh.. I miss dear old West Country..

absolutely agree porlock is a disgrace to modern living. they should get rid of a few streets of those pokey old cottages and build some nice modern flats t.k maxx,starbucks and a nice gregs for some real sausage rolls (not those porlock pastie affairs),wouldn't do any harm.what are the council doing? the place is a shambles!

Is this guy having a laugh? I wouldn't mind putting a tenner on the fact that he's never actually been to Porlock. I can't remember the last accident on that particular spot, and the fire service regularly seem to get the engine round there OK. Fair cop, in the summer the roads are pretty atrocious, but no worse than most towns and cities.

I dont really know why you are disgracing Porlock to be honest with you, our village wasn't bloody made for traffic and traffic only!!! its a beautiful village and its got better traffic than it has in huge cities like London, i mean at least we dont have huge queus nearly twenty-four seven!!!! oh and the *mostyn person* you can stick your starbucks up your fucking fat ass!!!!!! and if you have a problem with my comment.....then you can just ask a number of people who live in and around porlock just a how good it is!!!!

Sarcasm Does Not Work On The Net

FUCK you Ryan McGreal, our geography class visited porlock recently and found it to have sufficient services and has won an award as an area of outstanding beauty so think of all the things you could have acomplished instead of wasting your time writing this post, seriously get a hobby or somthing.
also anyone with any form of intelligence will be aware of the presence of longshore drift at porlock bay quickly eroding the natural coastal defences, making it prone to flooding.
within a few years this is likley to have done what you are proposing. making you, your livleyhood and your opinions COMPLETELY redundant.
Fuck you

This dump isn't up to code either, and it would be easy enough to bulldoze:

"I was immediately struck by how achingly beautiful this street is"

Do some of the posters not perhaps wonder how you can write this if you really think the place should be raised to the ground to meet modern building regulations?

Some people clearly wouldn't recognise sarcasm if it bit them on the arse. Nice feature. Thanks,