Are there seriously some councillors who have yet to make up their minds whether they will accept the Provincial money that Council asked for?

Well, it wasn't the disaster some people feared - but it wasn't a proud moment for Council either.

Last Week, Ward 4 Councillor Sam Merulla threw down the gauntlet with a notice of motion calling on Council to "reaffirm the acceptance of the $1.0 billion dollar investment in infrastructure and public transit that the Province of Ontario has provided for the express purpose of completing the LRT project."

That motion was presented at last night's Council meeting, and while no one was sure quite what to expect in the debate, it was widely assumed the motion would pass overwhelmingly once the posturing and grandstanding was out of the way.

Instead, with almost no opportunity for debate, the motion was deferred by a 9-6 vote until the May 18 General Issues Committee meeting, when the preliminary LRT Alignment report from the May 2 LRT Sub-Committee meeting is presented to all the councillors.

That meeting turned acrimonious when Ward 5 Councillor Chad Collins and Ward 8 Councillor Terry Whitehead grilled staff with questions and claims designed to undermine confidence in the LRT plan. Whitehead claims he still supports the Provincial investment, whereas Collins says he opposes it, even though he voted in favour of it consistently between 2008 and 2014.

Last night's meeting never had a chance to turn acrimonious. As soon as Merulla had spoken to his motion - and he spoke like an old-timey preacher, if old-timey preachers railed about people lacking "balls" - ward 15 (Flamborough) Councillor Judi Partridge immediately moved to defer the motion. Once a deferral motion has been made, the procedural rules bar Council from debating the issue further.

Thanks to Joey Coleman of The Public Record, you can watch a video of the LRT proceedings:

First, Merulla confirmed with City finance chief Mike Zegarac that the City has spent $5-6 million on LRT planning so far, of which some has come from the Province (including $3 million to complete the original Class Environmental Assessment on the B-Line).

He also confirmed with the City Clerk that Council has voted multiple times in favour of LRT. The Clerk confirmed "at least three" votes from memory, but there are at least several votes:

In addition to the February 2013 vote to approve the Rapid Ready LRT plan and the April 2013 vote to reaffirm Council's support for Rapid Ready, Council voted last year to establish a new LRT Office to coordinate with Metrolinx on the consultation and design work for the LRT line.

Early this year, Council voted to approve a Memorandum of Agreement (MOA) with Metrolinx on their collaboration to write an amendment to the LRT Environmental Assessment the City completed as part of the original Rapid Ready LRT plan.

And Council has approved every LRT Sub-Committee report that has been presented to it since the November 30, 2015 meeting.

Merulla further confirmed with Zegarac that the billion dollars is already earmarked in the provncial Treasury to be spent by Metrolinx on Hamilton's LRT system. He went on to argue that for any infrastructure projects along the LRT corridor that were already budgeted by the city but will be covered by the LRT capital project, that municipal money can be freed up to complete other projects on the city's infrastructure backlog.

Sidenote: Ward 5 Councillor Chad Collins' body language is remarkable during this segment of the meeting. While Merulla is speaking, he is literally swivelling back and forth in his chair and rolling his eyes at the ceiling. 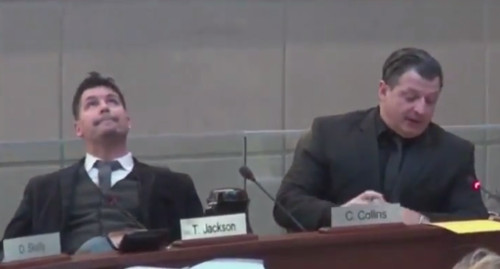 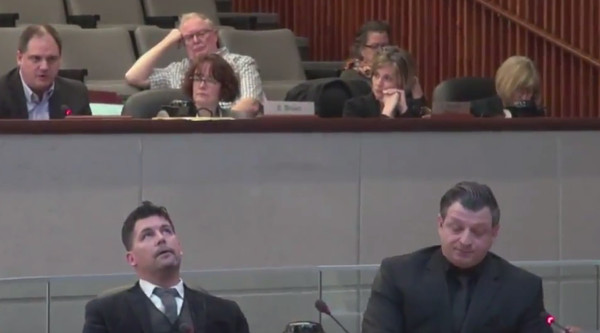 After getting through his questions, Merulla got to his statement, which is worth quoting in full:

Mr. Mayor, what we have before us, really, is a situation of inconsistency, unpredictability and chaos. People can't commit to what already we've committed to. It is a frightening state of affairs of voting based on false pretense and communicating to our public accordingly.

I have, since 2008, conducted nearly 25 public meetings. I have cordially [audio cuts out for a second]. Those of us that are on the line from City Motor [Hotel site] to McMaster [University] and now going down to the [West Harbour] GO station have a direct impact. And as a direct result, I was very proactive in communicating what this all meant.

To now, in any way, from an obstructionist standpoint, try to impede the progress that we've made to this point, although the line is already [unintelligable] at ten percent, we're already at the implementation stage here, folks. We're not debating the merits of the project.

But nobody went as far as what's going on or what I've heard or at least what people have indicated to me, that there might be a deferral to actually commit to what we've already committed to, of a billion dollars sitting there to be spent for LRT, which then concludes, to my eyes, that people are soft on this particular project.

But we are now [audio cuts off] one billion dollars of capital expenditure, and this project - you want to talk about the merits of this project, I will do so, but it's really about the integrity of the process and the integrity of each and every one of us in voting based on purpose and objective, to only then change your mind because you got weak-kneed and lacked balls.

And I tell you that that, Mr. Mayor, is something that I personally am offended by. Because whether you love me or hate me, I can assure you that when I say something, I mean it. I don't think a lot of people around this table can say the same anymore, and for that, I say shame.

As soon as Merulla finished and the applause from the gallery ended, Councillor Partridge immediately moved to refer the motion to the May 18 GIC. The motion was seconded by Ward 10 Councillor Maria Pearson.

Merulla knew the deferral motion was coming. He sent an email to local media yesterday at 3:28 PM in which he wrote:

It has been brought to my attention that a referral motion on reaffirming the billion dollars allocation for LRT, roads, sewers, sidewalks and other related infrastructure for a month.

Clearly my attempt to expose duplicity on the LRT support is coming to fruition and I can assure you that I will not be supporting such a weak kneed delay tactic approach, to a complex, transformational, multifaceted City building project.

He also spoke to the planned deferral during his remarks.

Since deferral motions cannot be debated, this effectively ended the discussion before it began.

Ward 2 Councillor Jason Farr was allowed to request an amendment to include all of the LRT Sub-Committee reports to date, all of which Council has already approved. (Ward 8 Councillor Terry Whitehead, somehow managing to keep a straight face, complained that this amendment was "grandstanding".) 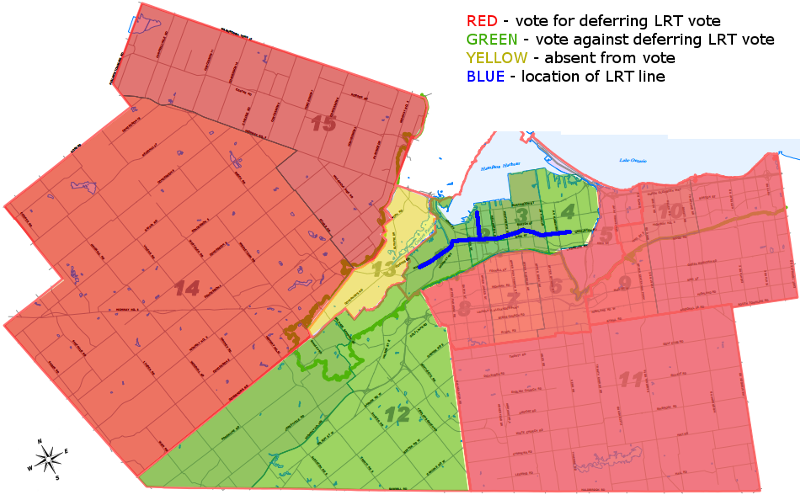 Map: votes for or against LRT deferral motion by ward

Why on earth didn't Council just vote to approve the motion and get it over and done with? Are there seriously some councillors who don't yet know whether they will accept the Provincial money that Council asked for?

Is there really anything in the LRT Sub-Committee report - which has already been presented personally to every Councillor and is in any case a draft for public consultation - that might make a Councillor change their mind about whether to support the LRT funding?

What, is someone going to change their vote because the lines are in the middle of the road instead of the curb lane? That's absurd.

The out-of-the-blue deferral, supported by a bloc of suburban councillors - excluding Ancaster Councillor Lloyd Ferguson, who strongly supports LRT - smacks of either sheer cowardice or else something more diabolical: a concerted backroom effort to derail this thing altogether and prevent Hamilton from receiving the transformational benefits of this once-in-a-generation investment.

Why is the Stoney Creek GO money not also part of this motion? Surely the Province is working to construct a rapid transit network, not just piecemeal projects.

The Mayor's comments implied it was a vote on the whole package, but I'm not sure if the GO extension was included explicitly in Merulla's motion.

Classic Hamilton-Wentworth politics, this type of suburban vs urban nonsense has been going on for 40 years.

It's sad that the City would literally say no to $1 Billion from the Province -- and just as shocking that Merulla would be so reckless as to starting that ball rolling by his notice of motion to "out" those councillors. Say goodbye to one of the biggest city building opportunities that will never come around again for Hamilton.

Of the out-of-the-blue motion on an item already approved by Council.

A waste of time and words.

Perhaps we should re-start a writing/email campaign to the councillors that deferred in order to express our displeasure with their lack of comittment?

I posted this in the other article about Merella's motion. Thought it might fit here too. Let's not forget history, folks.

I'm not sure I would have taken Sam's approach BUT I don't work there and face the daily anti-urban garbage his colleagues love to spew. They don't want to end area rating and start paying for transit, but they want to oppose and veto every urban transit project that comes along. Enough is enough. The likes of these councillors are the very reason Hamilton became the donut hole in the Golden Horseshoe.

They make it their favourite past-time to dump on the lower city and talk about how much it sucks, yet oppose every measure to improve it, all the while expecting urban councillors to blindly sign off on their non-stop gazillion dollar highways and roads across farmland all over the outskirts of the city. For people who's constituents "never go downtown anymore" they all love to interfere in all attempts to rebuild this once proud city. I for one would support all urban councillors in voting against and blocking every single suburban infrastructure project that comes across their table for the rest of this term.
Again, not because I would have gone down this road, but they've forced everyone's hand. Sam isn't initiating anything here. He's responding to years of nonsense.

I support Sam in calling them out on their hypocrisy, classism and anti-Hamilton sentiment. THEY are the problem here. Not him or his motions. It's about time someone stood up to the bullies.

In looking how the vote went, I'm not sure Sam's motion even makes any sense. Of the 9 votes for more info (deferral) : 1 is rural, and 4 were from those that pay the same transit rates as the core. He might have just lost the majority with this bullying tactic and threatened the project itself.

It's the diabolical scheme you mention is what is happening here. There is no doubt in my mind this city is corrupt with forces sucking the life out of it, and paying these councilors to keep it this way. What an arrogant disrespectful asshole Collins is, but at least he doesn't pretend to have any shame. The rest of these councilors can go to hell.

Social media has been extremely loud in the last few days.

Looks like Collins is taking a dump in his chair or he's having a stroke.

Does this make gondolas more or less likely?