The Apology offers insightful glimpses into the lives of "comfort women" who were systematically abducted, tortured and raped by the Japanese Imperial Army during World War II.

Imagine you have three sisters: Gil 13 years of age, Adela 14 and Cao 18. Now, imagine one day they simply disappeared for months or even years. When they return they're secretive, silent, often lost in thought and afraid to share what happened during their time away. That was reality for over 200,000 Asian women and girls forced into sexual slavery by the Japanese Imperial Army during World War II. Now in their 80s and 90s, these women from the Philippines, Indonesia, Taiwan, China, North and South Korea were once referred to as the "comfort women." 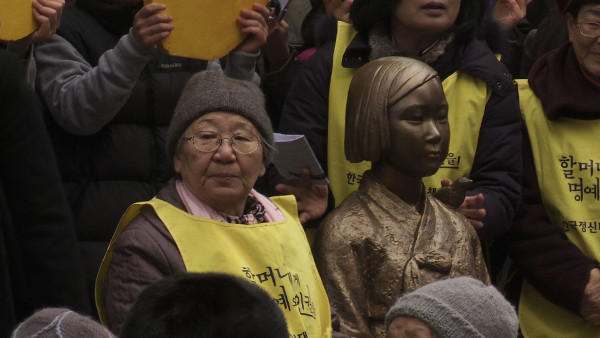 Today, their supporters affectionately call them "grandmother" and stand in solidarity with them as they respectfully, even graciously, tell stories of systematic abduction, torture and repeated rape. The grandmothers want an official apology for these human rights crimes from the Japanese government and their stories given their rightful place in history.

The Apology is the debut film of director Tiffany Hsiung. It's currently the number one audience pick at the Hot Docs Festival and there are very good reasons for that. The Apology is an emotionally packed, powerful Canadian documentary made by an all-female production team: Tiffany Hsiung, Writer and Director; Anita Lee, Producer; Mary Stephen, Editor; and Lesley Barber, Composer. They have created a tribute befitting these courageous women.

The Apology offers insightful glimpses into the lives of Grandma Gil from South Korea, Grandma Adela from the Philippines, and Grandma Cao from China. Rather than focusing on the depraved acts of their abusers or reliving the horrors these women subjected to, instead, we are given the honour of observing and appreciating the incredibly resilient women they have become.

Abducted at age 13 from North Korea, Grandma Gil was a sexual slave for five years. She was released after contracting a sexually transmitted infection, the complications of which left her sterile. In the course of her journey home Grandma Gil unwittingly wound up in South Korea just as the border between north and south closed. She never saw her family again.

For over 25 years, Grandma Gil has attended weekly peaceful protests outside the Japanese Embassy in Seoul. Grandmothers, and their supporters, continue to demand justice for the survivors of these war crimes. Grandma Gil is tireless in her efforts even undertaking a two week tour of Japan to spread the truth about comfort women in response to comments made by the Japanese Prime Minister that sexual slaves during World War II were a necessity.

Grandma Gil's journey also takes her to China to speak at a conference on justice for the comfort women of North and South Korea, as well as to the United Nations in Geneva, Switzerland, where she presents a petition with 1.5 million signatures to the Office of the United Nations High Commission of Human Rights. This gentle, loving woman simply wants an apology from the Japanese government so that her heart, and the hearts of all the grandmothers, can heal.

Grandma Adela lives in the Philippines. Only her mother knew what really happened when she disappeared. Grandma Adela does have support though and it comes in the form of a group of survivors known as The Lola Kampaneras. These women, all over 80, share the same dark past, but these days they share smiles, songs, dances, and celebrations.

Grandma Adela takes us to Dona Baray Garrison where she was kept prisoner and raped for almost three months. Like so many comfort women, Adela kept her secret hidden from her family, husband and children. The universal fear of the rejection and shame associated with rape kept these women quiet. But, we are invited to share the moment when Adela tells her son about her past.

In a telephone interview Hsiung said that she made the documentary because, "Knowledge is justice. This film reveals the power of the human spirit and the resilience of the grandmothers. A documentary gives you the ability to look beyond a headline and explore the depth of an issue."

The Peace statue was placed in front of the Japanese Embassy in Seoul on Wednesday, January 8, 1992 to mark the 1000th demonstration for justice for the survivors. The statue is of a bare foot Korean girl in traditional dress seated beside an empty chair. She is a reminder of the atrocities visited upon women during times of war. She is also a stark reminder that the grandmothers are the true symbols of honour and valor.

The Japanese government finds the statue offensive and requested that it be removed as part of the December 2015 compensation package. Today, the statue remains firmly in place with survivors and supporters alike sitting in the empty chair beside this beautiful young woman. A replica has been erected at the Korean Cultural Centre in North York, Ontario. I suggest you visit with your mother and take a selfie while sitting in the empty chair. Then, send the photo out to the world in support of the grandmothers.

Thankfully, a new generation has taken up the cause of the grandmothers because these women deserve no less than complete absolution for the physical, psychological and spiritual traumas they endured. They were never whores or prostitutes they were victims of war crimes.

According to Hsiung, "There is a universality to what they are going through. This is not an exclusive World War II event. It's happening today, in countries around the world including Canada where we have to address our murdered and missing Indigenous women and the issue of human trafficking. It's all around us. We are not doing enough to protect women. We need a global approach with the international community working together."

The Apology showcases the strength, love, beauty, power, resilience and quiet determination of women who survived a living hell on earth and triumphed in their own individual ways despite being blamed, shamed and ignored by the world.

Memories are beginning to fade with age and in this case that is a double-edged sword. The grandmothers deserve to forget the terror and pain, yet their stories must be preserved in recorded history. The grandmothers will only truly be liberated when an official record is made of their experiences from their female perspective of this period in Japan's history.

According to Hsiung, "The crux of the movie is to pass on to us the memory so we can carry on. The grandmothers need to finally rest."

This Mother's Day, make the time to see The Apology - and yes, take your mother.

The Apology will be screened Sunday, May 8 at 12:45 PM at Isabel Bader Theatre and at 6:30 PM at Hart House Theatre in Toronto.

This article was first published on rabble.ca.

but all the white boys at raisetheryan.com not concernd about africn canadian hassled by police in hamilton last week.

This isn't a newspaper. Why not submit a story yourself?

Thanks for this review. I will definitely try to catch this film