This gallery, in which every item is priced firmly at $100, originally came out of a joke about modelling an art gallery off the concept of a dollar store.

By Mackenzie Kristjon Jenkyns
Published May 04, 2016

Hundred Dollar Gallery is an art gallery in Hamilton, Ontario, whose price point is firmly maintained at $100. Founded in 2015 by artists Stephen Altena and Andrew McPhail, it features a curated selection of work, as well as pop up openings and events. I was fortunate to sit down with Andrew McPhail to discuss the gallery. 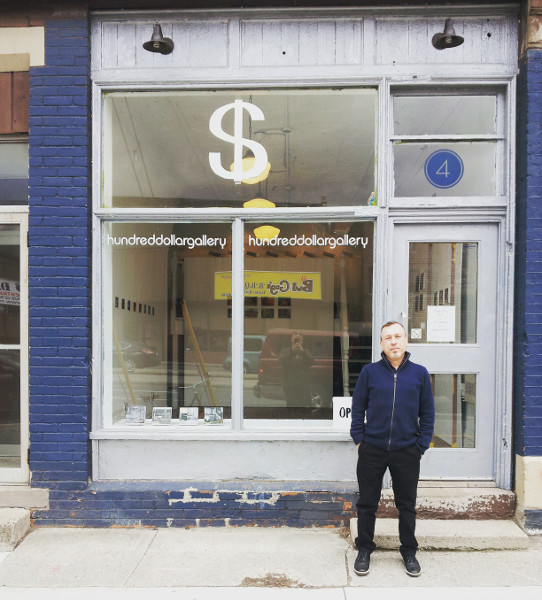 The gallery itself is at 4 Cannon Street East, just off the famous James North strip. It's easy to spot with a large white dollar sign to lure in customers.

Our conversation naturally began by discussing money. I presented Andrew with some fake hundred dollar bills, which naturally led to a story of how some people in China bury the dead by burning special fake funeral money. It was one of those afternoons!

The gallery opened in September 2015 at Supercrawl. It originally came out of a joke about modelling an art gallery off the concept of dollar stores. As Andrew describes it, "$100 is basically as low as you can go and still get something of quality. These are real one-of-a-kind artwork by artists who have good reputations and yet still be affordable."

There's a humorous quality about the theme, which the owners hope takes away some of the self-importance that may create a barrier for those unfamiliar with the process.

For people who have an attitude of art as being frivolous or expensive, hundred dollar gallery provides a fantastic entry-level price point to at least get the concept of going to galleries and buying something.

As Andrew puts it, "Think of us as a training gallery. We're teaching people how to buy art and from artists that have serious art credentials."

A lot of items are small and work well as gifts. Some are studies for larger works or other one-offs.

Andrew himself has been involved in art for a long time and has shown in many galleries. In fact, later that day, I saw his work in b contemporary Gallery down the street!

His work is often quite conceptual and always interesting. One time he took a picture of me wearing googly-eye glasses with a screen of googly-eyes in the background. Very striking.

One of the retail experiences that Andrew described was working in a high-end framing shop in Toronto. While not a gallery per se, it afforded him an opportunity to see the business more from the retail side.

In some ways, Andrew explains that part of the object of the gallery is in and of itself something of an art project. It has given him and his partner Stephen, himself a talented painter, a chance to explore this aspect of their own belief in community and art.

Whether you're looking for a unique gift or just curious to see what's going on in the trendy downtown art scene, Hundred Dollar Gallery is worth checking out!