The third annual overnight bike trip to Haldimand Conservation Area offers a unique experience and promises to be one of the best times you've ever had making a difference to the environmental health of your community.

A plant, like a solar panel, collects energy from the sun, using a process we call photosynthesis. It breathes in carbon dioxide (CO2), breaks off the two oxygen atoms (the "di-oxide" part) to breathe back out, and uses the carbon atoms to build the cells of its body; that's how plants grow.

The growth, death and respiration of those plants, and the respiration of all the animals which breathe out carbon dioxide (like us), all form a giant self-renewing cycle on our planet.

Those plant bodies, subjected to enormous pressure over immense amounts of time, compress down into hydrocarbons like oil or, at greater depths and even more pressure, natural gas.

When you burn those hydrocarbons, the fire sucks in oxygen, reattaches it to the carbon, and releases it into the air as carbon dioxide again, reversing the plants' process.

We've understood how that works for over a century, and the impacts of that carbon dioxide, and other greenhouse gases, on our planetary climate is the most thoroughly studied scientific topic in all of human history. Predictions of climate scientists have come reliably true for decades, with the frightening distinction that they are almost always too optimistic.

Every IPCC report boils down to an admission that: Wow, things look a lot worse than we predicted last time, so we'd better step up our climate action game right quick. That's how the planet's carbon cycle is directly impacting our lives, and will increasingly do so.

But Hamilton also has its own Carbon Cycle. It's even simpler to understand and also a hell of a lot more fun.

This year also marks their third annual Carbon Cycle, which takes place on June 25-26. Somewhere around a hundred Hamiltonians will depart Corktown park on their bicycles for a leisurely cycling trip to the Haldimand Conservation Area on the shore of Lake Erie for an overnight stay. 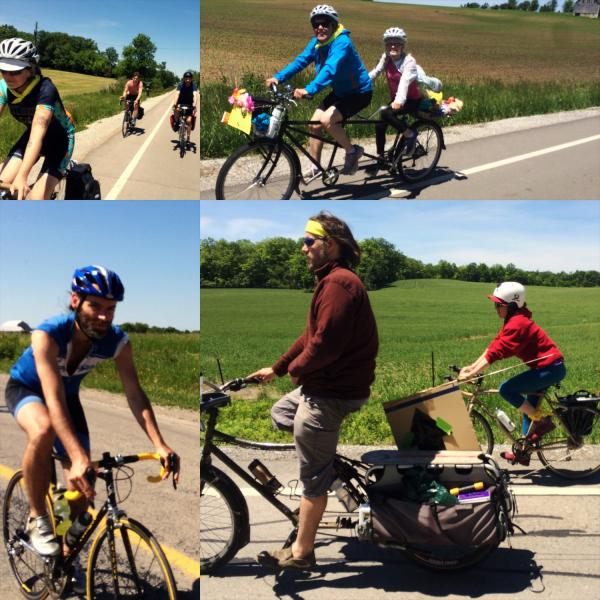 Your luggage gets brought there and back in a van so there's no backpack-sore shoulders to worry about, and a travelling bike maintenance crew keeps everyone free wheeling so that you can focus on the pleasures of the countryside.

That last part is the important part, because Environment Hamilton has heard the call of the climate scientists as we head into another record hot year that is already well on its way to beating out last year's record heat by a record margin, after it blew away the previous record holder, 2014.

EH are stepping up their game with the addition of a new Climate Change Campaign Crew dedicated to giving Hamilton residents tools to reduce their climate footprint as individuals, and rallying them to encourage City Hall to adopt policies to help us adapt and grow as a strong community in the face of a rapidly changing world.

I should know, I am one of their two new staff members. We've hit the ground running with a flurry of activity, I'm learning a ton, and I'm nine kinds of excited at the scope of the kind of difference we may be able to make.

It's an ambitious effort, which should be unsurprising to those familiar with this hard-working 'little organization that could,' and funded by citizen donations through fundraising events like this one.

Of all the worthy causes seeking our attention, Hamilton's Carbon Cycle offers a unique experience and promises to be one of the best times you've ever had making a difference to the environmental health of your community. For anyone who might be interested in bicycle tourism and unsure how to get started, it's also a chance to test the waters with a lot of support and good company.

For more information about the event, to pledge a donation, or to seize one of the coveted registration spots, you can check it out on the EH website here: