Angry about a housekeeping motion to fix an amendment missed from a Council-approved motion on Aberdeen Avenue, Councillor Whitehead proposes closing the Beckett Drive and James Mountain Road accesses.

Another week, another reactionary stunt by Ward 8 Councillor Terry Whitehead. The stage for this performance is the April 27, 2016 City Council meeting, amid Ward 2 Councillor Jason Farr's notice of motion with respect to Aberdeen Avenue. 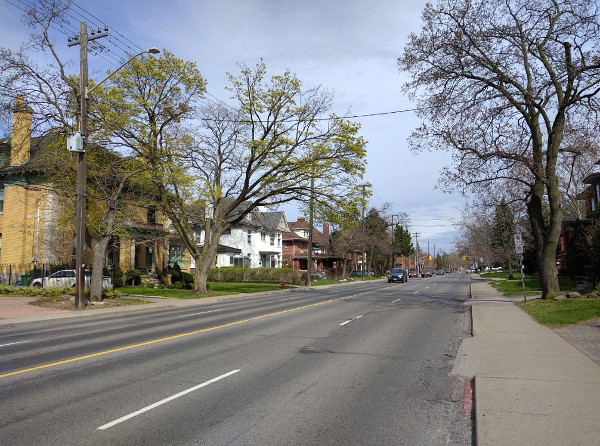 Late last year, Ward 1 Councillor Aidan Johnson brought a motion to Council directing staff to review Aberdeen Avenue between Queen Street and Longwood Avenue under the context of the Transportation Master Plan review with the goal of implementing a more inclusive pedestrian- and cycling-friendly design.

The amended motion that was approved by Council stated:

That staff, in consultation with all affected Ward Councillors, be directed to undertake a full review of Aberdeen Avenue from Queen Street to Longwood Avenue, respecting the safety and operational characteristics of the roadway; with specific reference to and harmonization with the recommendations and principles of the updated Transportation Master Plan; with a focus on improvements to meet the request for a more complete street- and pedestrian-friendly design, including consideration for a road diet, and the recommendations put forward by the Kirkendall Neighbourhood Association Working Group regarding Aberdeen Safety and Road Improvement, and report to the Public Works Committee.

That the appropriate staff be directed to work with the affected Ward Councillors on interim safety measures along Aberdeen Avenue, during the full review of Aberdeen Avenue from Queen Street to Longwood Avenue, respecting the safety and operational characteristics of the roadway. [emphasis added]

So Councillor Farr had a notice of motion to finalize this second part of the previously-approved motion. This sort of motion is referred to as a "housekeeping motion" because it seeks to set the record straight on something that has already been decided, rather than introducing a new issue.

The city's committee meeting website is broken-by-design so we can't link to Councillor Farr's motion directly, but it is item 8.5 on the agenda under Notices of Motions.

Thanks to The Public Record, you can watch the City Council meeting in full. The section dealing with this motion starts at the 1:18:40 mark.

For a bit more procedural background, a councillor brings a notice of motion to Council to advise Council that they will be bringing the motion itself forward for consideration at a subsequent meeting. A Councillor can also ask Council to waive the rule that the motion must wait until the next meeting, and if Council agrees, they can consider the motion right there and then.

When the agenda moved to item 8.5, Farr acknowledged the notice of motion and then said, "It can hold off until next council meeting."

Immediately after that, Ward 1 Councillor Aidan Johnson asked Council to waive the rules in order to introduce the same motion. Things get a bit confusing at this point.

Cue Whitehead, who tried to debate whether to waive the rules and debate the motion, bringing Council to a level of meta it doesn't often achieve. He argued, "I'm trying to understand the urgency or the time-sensitivity, understanding the Master Transportation study will not be completed until September."

Just to be clear, this was a housekeeping motion to clarify that the already Council-approved Aberdeen motion was also supposed to direct staff to look at possible interim measures to improve safety on Aberdeen Avenue while waiting for the results of the Transportation Master Plan review in September.

The amendment had already been approved by the General Issues Committee last year but was not included in the text of the motion that was approved by Council.

The City Clerk explained, "We were made aware that the motion that was actually approved by Council from the GIC report didn't contain the full text of the amendment that was put by Councillor Farr at the time. That came to light today so this is why this motion was brought on as a notice of motion, because it didn't make it into the agenda. And both Councillors Farr and Councillor Aidan Johnson were involved with this."

Once this confusion was finally straightened out, the motion was immediately carried. But Whitehead was clearly not happy about any of it. As soon as it was carried, he indicated that he had another notice of motion - and it sounds exactly like he made it up on the spot.

My notice of motion, Mr. Chair, is that: Whereas, there is a push to put more arterial roads on road diets creating more congestion, where, uh, there is a review of Aberdeen that staff be directed to take a look at the impacts on Fennell, Garth and Scenic where we have over a half a kilometre, a kilometre of traffic queueing, uh, preventing homeowners getting access to their driveways or access to the roadway, and looking at the feasibility of closing down Queen Street Hill and West 5th altogether. [emphasis added]

This is essentially the procedural equivalent of that kid on the playground who doesn't get his way so he picks up his toys and stomps home.

For now, it's just a notice of motion. We can expect that the motion itself will be presented for debate at an upcoming meeting, assuming Whitehead can find someone else around the Council table to second it. 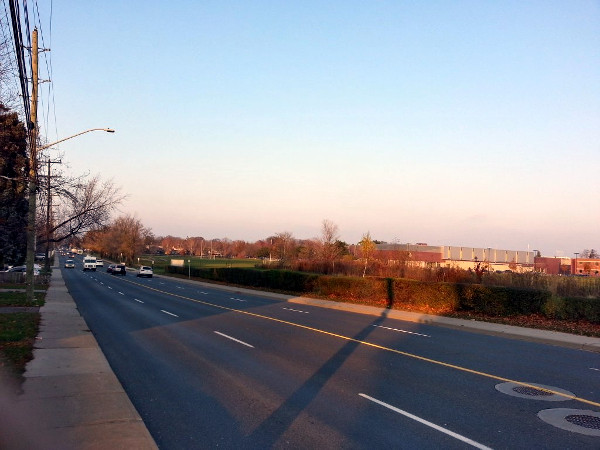 has anyone at rth spit balled the consequences traffic wise or economic wise? cause if closing off these routes means terry whitehead cant get to council...... could be a decent trade off.

My wife wants to start a movement to get Terry his way on this one, for pretty much the same reasons as OrangeMike stated.

I for one just want to add that Terry has finally really and truly jumped the shark, in a way I've never seen him do before. Time to pack up and go home, Whifflebat.

Whereas it is a known fact that Councilor Whitehead is a bonehead, a blowhard, and eminently not worth the time;

Thereby let it be resolved that we all stop talking about him as though he were of any consequence.

The site can always use more content and more contributors, no doubt. Fill your boots...

Wow, just wow. The only time I have seen a traffic backup on the accesses is when there has been an accident or something causing it. There are also backups in the mornings on the West 5th access. These can easily be avoided by using the Claremont Access & going west on Charlton,Hunter or King or going to the Linc. & taking the 403. I have never witnessed a backup on the Claremont since they stopped running the trucks from the Erie Works to the Hilton Works. Maybe his idea is to turn the West 5th access into a multi use pedestrian, cycle way.

I echo these statements. My wife and her mom carpool in to McMaster daily and have to wait for maybe 1 or 2 light cycles to get down the hill at Scenic/Fennell, and that's at about 8am. Same thing in the afternoon on their way home. I really don't know who all these people telling Clr. Whitehead that they're unable to get out of their driveways or whatever during the day; it seems more like Clr. Whitehead feels that the road should be a private one for him and a few others.

Who are you and how did you manage to take control of DowntownInHamilton's account?

I'm who I am always. This is one of those things that drives me nuts with Clr. Whitehead - this point he keeps trying to make that has no basis in fact, other than what I can imagine is only 1 or 2 old people calling to complain that 'it's not like it used to be up here'.

There are absolutely backups frequently leading into the down-bound Beckett Drive access, and they have nothing to do with the speed of traffic on of Aberdeen. Rather, they have to do with the 1-way nature of Queen, which means a massive chunk of traffic must do a completely unnecessary left-turn to pull onto Aberdeen instead of proceeding straight up Queen.

this is exactly right. check out how fast and free flowing the NB lane of Queen is at the Aberdeen corner. Hardly anyone uses it because Queen suddenly becomes one-way for no apparent reason halfway to Main.

And there's a slight backup down-bound on West 5th whenever St Joes has a significant shift change, which, again, has nothing to do with Aberdeen.

There is absolutely no reason for Queen St. to not continue North to MAIN AND KING. Queen is a no brainer 2 way for any rational thinker.

He is turning himself into Rob Ford and will soon make a run for mayor - count on it.

You're probably quite right.

I was on Garth today at rush hour and it was down to 2-lanes for sewer work. We actually had to slow down to 40km/hr for about 7 seconds. Pandemonium

When can we expect the 1 way conversions of Fennell in one direction, and Mohawk in the other? An then Upper James and Garth?

I would assume very soon based on how much councillors feel one-way streets are fantastic and should never be reverted back to two-way. Surely they're all clamouring to have some in their wards too. Another case of downtown hogging all the good stuff.

This is the first time I whole heartedly agree with Whitehead. It would be waaaay cheaper to close the Queen hill :)

I "commute" on Aberdeen and the Beckett Hill every weekday to my 9-5ish job. I have yet to see traffic anything but "pretty busy" anywhere on my route. I sincerely don't understand what Terry is talking about regarding Aberdeen, W5th, Beckett, or Garth. It's fine and it will still be fine if Aberdeen is traffic calmed. What? I'll have to go 40km/hr for three minutes? So what! The trade-off of a safer neighbourhood is so very well worth that.

You people are missing his argument. If they narrow Aberdeen to facilitate bicycle lanes and wider sidewalks, then it will slow traffic down on Aberdeen hence creating the backups on the mountain access'.

I'm no Whitehead fan but I get where he's going with this.