Safe Cycling Not a Priority for West Mountain Councillor

While the Minister of Transportation believes cycling is healthy, in Hamilton it remains a dangerous, unsupported method of travel.

On the same day day that the Ontario Minister of Transportation was in Hamilton promoting cycling as a healthy way to travel, I conceded defeat and carried my bike down the mountain access stairs.

The day before, I had once again been bullied by Hamilton drivers, intent on teaching me a lesson that bikes have no place on their road.

I live on the mountain and work downtown. I prefer to ride my bike to work, believing, as does the Minister, that cycling is a healthy alternative to driving a car.

I know what I am doing. I ride down the mountain at almost the same speed as those in cars, so to the extent I slow down anyone, it is for a few seconds at most.

When it became apparent that motorists would pass me despite signage indicating passing is forbidden, I began to take the whole lane in an effort to prevent being passed. Passing should be forbidden - the access is curved, short and steep.

Despite my efforts, Hamilton drivers insist on pulling into the oncoming lane, even if there is traffic coming up the opposing lane.

This is what happened on Monday. On Tuesday, another car pulled into the oncoming lane without regard for oncoming traffic. That was bad enough, but a large, black SUV revved its engines and followed in the path of the first car to pass me.

Neither vehicle was aware of - or cared about - the oncoming cars, and certainly, neither cared a whit about me on my bike. They had a point to make. Thankfully, somehow, there was no collision. When I met up with the SUV, the driver and his passenger refused to make eye contact with me - they had already made their point.

I contacted my city Councillor, Terry Whitehead, to inform him that drivers are repeatedly disobeying the traffic rules on that hill and that it was going to cause an accident.

His staffer returned my call to tell me the West 5th access is not a designated safe bike route, that there are buses with bike racks on that route, and there were no plans for bike routes on mountain accesses.

She also told me she had witnessed someone ride down the access on a skateboard, and she had personally witnessed cyclists riding the wrong way on one way streets.

None of that had anything to do with my riding or my concern, of course, but it made clear her point that the message from the councillor's office is that there is no priority given to cyclists and they shouldn't be on the road - that is what the buses are for.

So, while the Minister of Transportation believes cycling is healthy, in Hamilton it remains a dangerous method of travel. On Wednesday, I carried my bike down the access after promising my father I wouldn't ride down the access.

He told me that he didn't want to put on my tombstone: "She had the right of way." 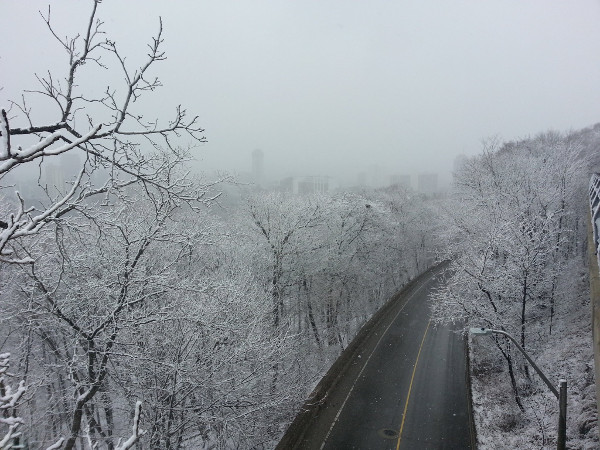 Jill McKenzie lives on the West Mountain and works downtown.

Wasn't this a wonderful way to celebrate Earth Day?

Thanks for writing. It speaks for many. I am glad that you informed the Councillor. The more these issues that are made public the more likely there will be change for the positive. Don't give up hope yet. I haven't.

"His staffer returned my call to tell me the West 5th access is not a designated safe bike route,"

Kevin's comment: It is legal to ride on all roads not explicitly signed otherwise. For example, highway 401.

Based upon your description, it appears that the motor vehicle operators were operating their motor vehicles in a manner that posed a danger to the public, specifically to you. This constitutes the criminal offence of Dangerous Driving.

I suggest that your next telephone call should not be to the municipal Councillor, but to the Hamilton Police. This is an emergency, so call 911. Please get licence plate number, a description of the criminal and tell the police that you are definitely willing to testify in court against the violent and dangerous criminal.

and what is your objection to placing your bike on one of the bike racks on the buses? Avoiding all of this, getting where you are going safely, and keeping dear old Dad satisfied?

That's right Jill, be a good girl and listen to your daddy and mansplaining randos on the internets.

...for the cost of $3 per trip. Meanwhile, the road the author bikes on is specifically meant for her, as per the Highway Traffic Act. Read it!

Maybe it's that she's entitled to use the road safely without waiting for a bus or paying $2.75, just as she would be if she were driving to her destination?

Selfishness? Are you kidding me? She wants to use the road the same way as any other user of the road.

Disturbingly low value put on personal safety? It is the motorists she describes who are putting others at risk, not she. Look up "blaming the victim" sometime.

dont pretend you care troglodyte. and with pussfrappes like you driving (hickup) no on is safe on the roads.

I feel the same way as the author. Intimidation of cyclists is far too common on Mountain Accesses. There is really no need for it. I am not sure why cars can't give a lane to upbound cyclists on the Kenilworth Access despite there being 2 lanes up and down. If you're going 50 km/h downbound on your bike, many car drivers still find it necessary to pass you at 70 km/h to prove some kind of stupid point.

and there were no plans for bike routes on mountain accesses.

Has Terry backtracked on the proposed Keddy Access coming in the next couple of years? (...the proposed Claremont Access cycle track...) Even Mr. Whitehead managed to actually keep a bit of an open mind to that one, having himself initiated a study on the Claremont cycle track.

Someone needs to make a correction to Terry's staff, and point their boss' plans out.

I'm not sure where Jill was going downtown but if she uses the Mountain stairs I would suggest trying the Bruce trail path that starts on the east side of the stairs & ends up on John Street. It's not ideal but IMHO a better choice than carrying your bike up & down the stairs. In a perfect world all drivers would follow the rules but all it takes is one bad driver and the outcome is not good. I have suggested to our Councillor that a sign at the top indicating there is a path but they don't seem interested. My wife & I use the path year round walking & 3 seasons on bikes, there is only one tight turn & some gravel. I have also used the Claremont taking my bike inside the north bound barriers & exiting on Charlton, I'll take my chances with a rock slide over the traffic.