It's very encouraging that Ward 2 Councillor Jason Farr has shown active support for this improvement, both in the construction phase and through its operational maintenance.

Last December, in response to pressure from a group of Durand residents and with the support of Ward 2 Councillor Jason Farr, the City of Hamilton paved a walkway from the north sidewalk on Hunter Street just east of Bay Street into the upper-level parking lot behind City Hall. 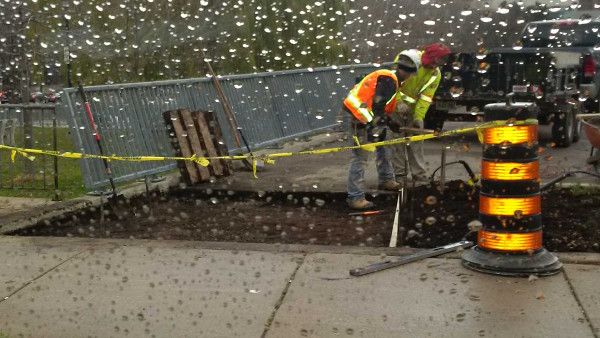 This is a high pedestrian traffic area with a particularly high concentration of senior citizens, but the street network is not very pedestrian-friendly.

The sidewalks are narrow and are have no physical or space buffer from fast vehicle traffic just inches away. Bay Street north of Hunter is interrupted by a highway-style slip lane for cars driving into City Hall, and Hunter Street slopes down steeply east toward MacNab with a sidewalk on only one side.

As a result, many people take various shortcuts across the City Hall grounds on their way between Durand neighbourhood and the downtown core, which includes major destinations like Jackson Square, the Farmers' Market and Central Library.

The strip of green space between the north sidewalk of Hunter and the upper-level parking lot is a linear vegetable garden, but a desire path across the corner indicated that lots of people were trying to get away from the traffic on Hunter as quickly as possible.

A group of Durand seniors approached Councillor Farr to formalize this desire path, and in early December a crew was out pouring a new concrete walkway. 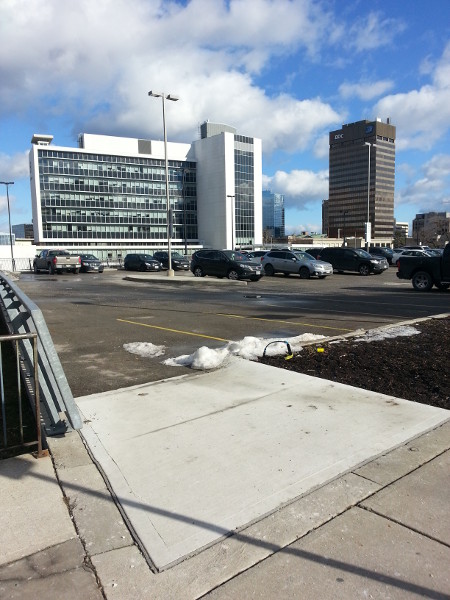 This was a good-news story that I was happy to tweet about when I noticed the walkway in January.

So you can imagine my disappointment yesterday at lunchtime when I came upon the following scene: 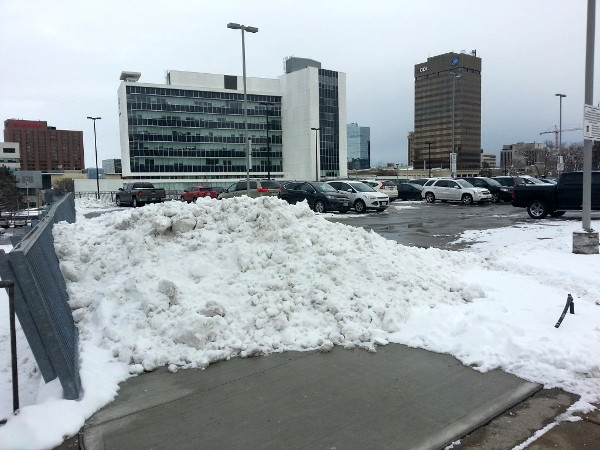 The new path that the City had just created for seniors was blocked by a huge pile of snow that had been cleared from the City's own parking lot!

This was a classic municipal case of the left hand not knowing what the right hand is doing.

To his credit, Councillor Farr was already looking into it. According to an email from Maureen Scally, Farr's administrative assistant, "Councillor Farr's office have contacted staff this morning to clear the snow from the pathway."

In a follow-up email just after 5:00 PM, Scally explained, "The new pathway at Hunter and Bay was ploughed by the contractor for the parking lot and unfortunately it was an oversight as the pathway was recently installed. Staff have assured us that all contractors are aware of this very useful walkway."

Her email included a photo of the walkway after it was cleared: 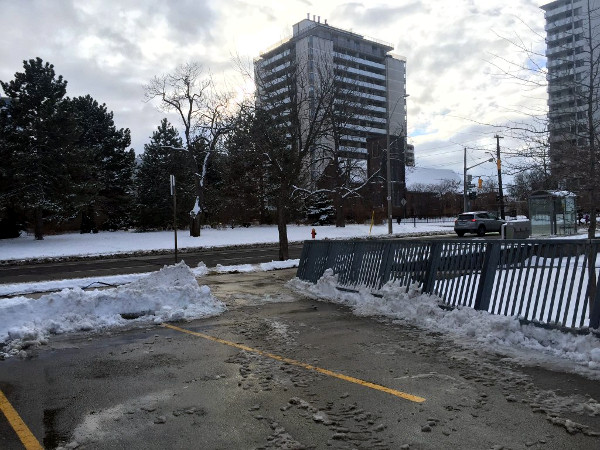 It's very encouraging that Councillor Farr and his office have shown active support for this improvement, both in the construction phase and through its operational maintenance.

As Hamilton gradually shifts from a legacy of auto-centric transportation policy toward a more inclusive policy that values walking, cycling and transit, we can expect these sorts of growing pains while various departments get aligned around the new policy.

The best way to work through the pain is for us all to work together - engaged citizens, attentive councillors and enthusiastic staff - to propose improvements, communicate problems, explain challenges and keep pushing for change.

I wonder if public works management could meet with the entire staff and give them one basic rule of thumb:

remember that this work is done by a contractor and not a city employee so public works has nothing to do with this. it's a private contract.

someone from city hall has to oversee this department, no?
I've never once seen one of these contractors pile snow on a brand new road that wasn't there before. So, they seem to have some sense of intuition while doing their jobs. Why is it then that they pile huge mounds of snow on brand new bike lanes or sidewalks as if they don't know what else they could be there for?

I pass through this pathway on my way to work and wrote to Cllr Farr when I found it blocked last week. I have not received any response to my email, so glad to know it was taken care of so quickly. 'Growing pains' is hopefully a good way to describe it.