My kids are no longer oblivious to the ills of the world. As they barrel through their teens, they are starting to read the paper and ask informed questions.

My kids don't toddle anymore but they still tug at my sleeve and ask for stuff they don't need. And I usually give it to them.

"Sure, but don't pull out your new filling."

"Not 'til you graduate from kindergarten."

I can't say no. My eldest, Emily, is 22. When she asked me the other day if I would accompany her on the 100% Possible climate change rally in Ottawa, she might as well have been batting her seven-year-old eyelids and asking for a Sleeping Beauty Barbie.

How far is Ottawa, anyway? I wondered, as I scanned the Greenpeace email confirming my place on the bus. What? Five hours!

As Sunday approached, I resigned myself to the fact that my weekend was already ruined. I didn't want to go - why would I? Ten hours on the road? When I could be going to the movies or chilling in front of the TV?

But it's for the kids, right?

My activism malaise isn't new. It began right about the time I left Hamilton and returned to Toronto. When I lived in Hamilton, I was up for anything. I worked on municipal campaigns, joined local groups and lobbied my local councilor incessantly.

But I soon realized that progress was hard to come by and, more importantly - that activism was hard work. So I took some time off.

Now with this latest request, I realized that my kids are no longer oblivious to the ills of the world. As they barrel through their teens, they are starting to read the paper and ask informed questions.

"Dad, is the capitalist model too profit-focused?"

"Eh? You want some help with your sums?"

"Dad, is Harperism a form of Thatcherism?"

Our bus departure was set for 7:00 AM, about a 30-minute walk from our house. Options for getting there included:

I have my bike locked up right outside the house, and Emily can grab a Bixi. When you live in downtown TO, biking is the best way to go.

The night before the march we checked the weather (minus 3, crap), packed our lunches and surfed the website.

"Thousands expected," it enthused. "Rallies planned across the world." Alright!

As I scrolled the page, I felt a dormant sensation stirring. The feeling that I was about to be a part of something important, something bigger than myself, something better than Netflix or brunch at Betty's.

The next day, my early morning auto-pilot kicked in and I staggered out the door at 6:20 AM looking only moderately disheveled.

As we biked across Queen to the meet-up point, I looked back to check on my daughter's progress. Where is she?

I finally spotted the poor mite, wedged between a Bixi and a traffic light pole. She righted herself and wobbled over.

"How are you doing?"

"Bad. I haven't ridden a bike for two years," she complained, "and these bikes weigh a ton."

So we dropped off the Bixi, locked my bike to a pole, and ran to the bus.

Fifteen minutes later we stumbled aboard. Our "Bus Captain" - how cool is that we have a bus captain? - Stephanie, welcomed us aboard with a warm smile and crossed our names off a list.

Ooh this feels like a school trip, I thought as we settled in at the back.

A young student with Elvis Costello glasses strolled up and handed us some cardboard and green paint.

As we pulled away I banged my head on the glass.

I ran my eyes up and down the bus and envied all the colourful posters: "100% Possible!", "Climate Justice!", "Go green!"

Not bad but a bit...obvious? I wanted my sign to stand out - but how?

I recalled a photo a friend had shown me of a massive Occupy rally somewhere in Europe. Among the plethora of, "Equality for all" and "We are the 99%" was a random declaration: "I have a sign." 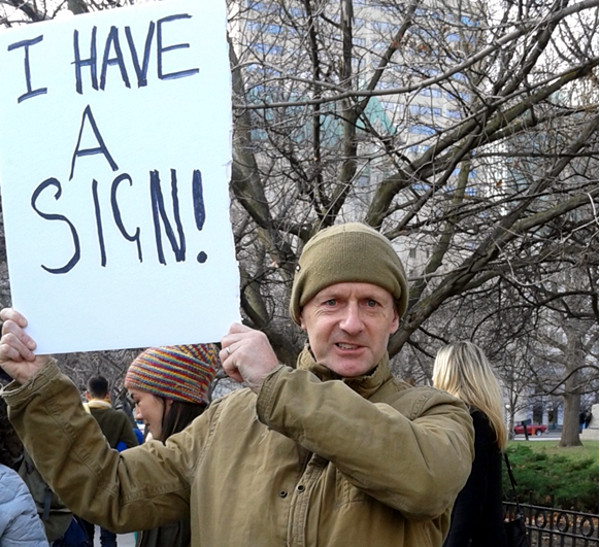 Perfect. Says it all - doesn't it?

Sleeping on a bus is never easy but when you're surrounded by the pumped-up energy of college kids each trying to out-like each other, it's impossible.

I should have brought a flask of whisky, I thought, as a tattooed tank top chick tried to fit a story into her cacophony of likes. This would make a great drinking game.

As we pulled into Ottawa I asked the leader - the girl with a Kim Kardashian "vocal fry" - what the term "Climate Justice" meant.

She looked me up and down - we're not in the dorm room anymore, Dorothy - and then blurted out her manifesto. "It's about more than climate change," she explained, "It's about income inequality, poverty, the one percent."

"No, not everything," replied her friend, as others turned to listen. "It's just saying that climate change is linked to our economy and the injustices that our capitalist model perpetuates."

"Are they in a cult?" I asked my daughter as we hopped off the bus.

We crossed the road and mingled with the crowd assembling outside Ottawa City Hall. 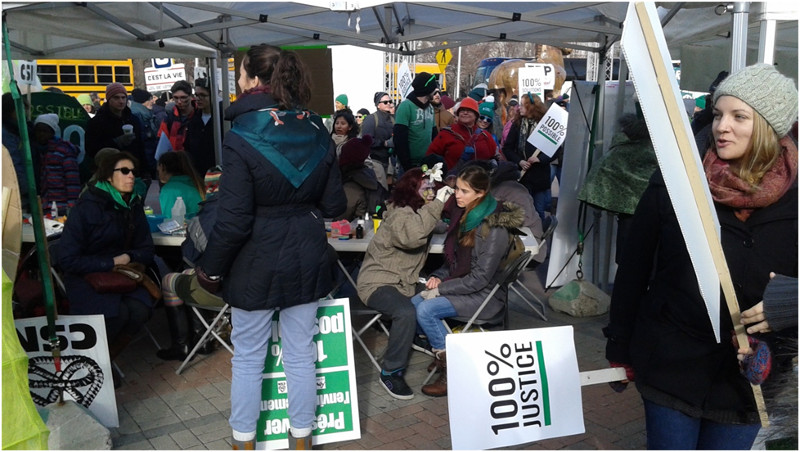 Studying the eclectic array of painted faces, funny costumes and First Nation drummers I was suddenly reminded of, well - every other rally I've attended.

Was I expecting something different? I don't know.

As we waited for the speeches to begin I took a gander at my surroundings. I have never set foot in Ottawa - I drove through it on the way back from a rafting trip 15 years ago, but I didn't see any reason to stop. Perhaps I spotted Ottawa City Hall and pushed the pedal down?

Ottawa City Hall is ugly, square and grey - the perfect place to pay your parking fine, but not a place for pride. The front is emblazoned with one of those 1980s looking logos, making the "O" look like it has a Flock of Seagulls haircut. 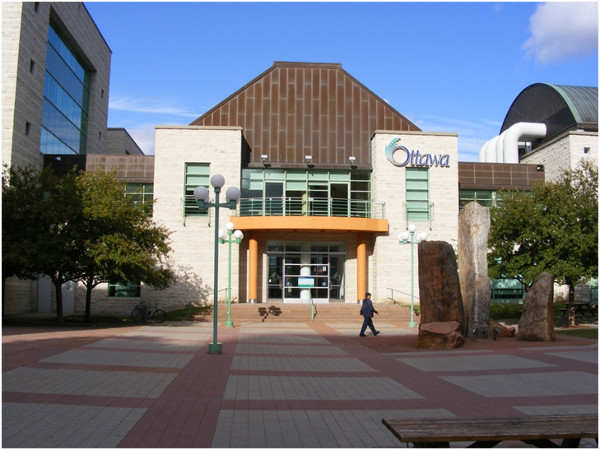 The entertainment began with The Raging Grannies. At least I think they were raging. They sang an a capella song in French. It's hard to tell whether French people are angry or just asking for a cigarette.

The audience seemed to like it, but as I don't speak French I just smiled and tried to clap in all the right places.

The next speaker was...French, too.

Should've checked the fine print on that ticket...

As he le'd and jeu'd his way through his speech, I thought back to the time I bought that stack of DVDs from that bloke at Betty's. When I put them in the DVD player, most were in a foreign language, and the language option wasn't working.

The Hulk in English is bad enough, apparently, but in Italian? Roar!

Next up were a procession of speakers I'm assuming I was supposed to know because their only introduction was their name:

I looked around at the several thousand people and wondered why we couldn't have somebody famous up there, or at least some entertaining speakers.

The general themes were ubiquitous: "There's no Planet B" and, "Think of your grandkids".

The Inuit mayor of a small Alberta town told us it was -40 in his village the night before. As the icy Ottawa wind whipped up my jacket, that made me feel a little better.

Eventually David Suzuki mobilized us - literally: "It's time to march!" - and off we went.

Well, almost. For some reason the organizers had been unable to cordon off the whole route, which meant we had a bottleneck right at the outset.

I thought about singing, "We shall not be moved" as we stomped our frozen feet and peered into the distance, but decided to take a short cut through the park instead.

As we trickled up one side of the road, I watched approximately one car a minute cruising along the other side. It reminded me of those Hamilton cenotaph services I used to attend in Gore Park. Cupping my ear to make out the lesson from the priest...closing my eyes to soak up the doleful wail of the Last Post as the cars whipped along 50 yards away.

The parade was a fun affair. Some bloke was ferrying a canoe with a papier mâche Justin Trudeau which kept on collapsing. Poor Justin. That would've never happened to Pierre. Most people were dancing, even when there wasn't any music.

After a short trek up the hill, once around the bend and another short cut across the grass, we arrived on the Parliament Hill lawn. Wow, that is a nice building. 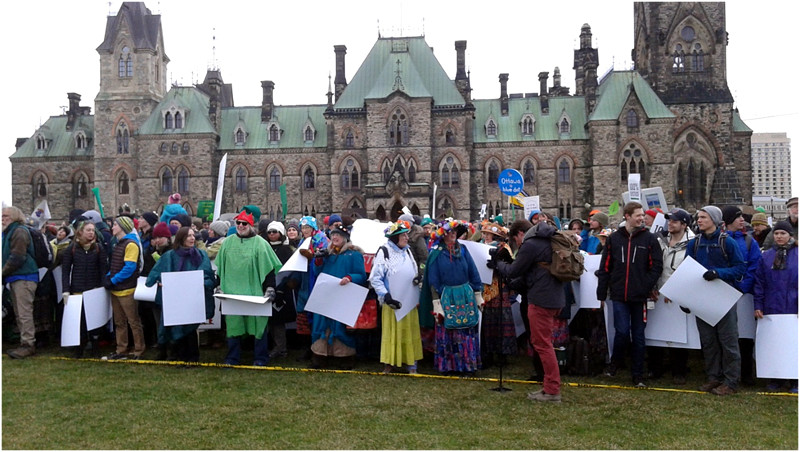 Raging Grannies getting ready to make the human sign.

Once there, we were corralled behind some caution tape to form one of the zero's in our human, "100% Possible" sign. 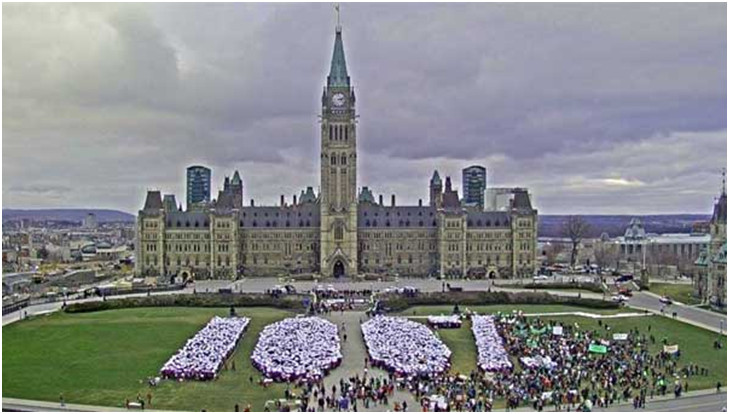 Our Human Sign. I'm somewhere in the second zero. It is 100% Percent Possible to convert to Green energy before 2050. (Image Credit: http://www.100possible.ca/)

After that - more speeches!

It occurred to me as I listened to another anonymous presenter talking about his grandkids that maybe they could get someone famous to play a few songs next time? I don't mind trying to save the planet but couldn't it be more...fun?

As we trotted back to the bus for the five-hour ride home I looked around the downtown. Even with the parade petering out the town was mostly empty. Ottawa has a smart looking core but, like many mid-sized cities, there doesn't appear to be a lot going on after dark.

Back on the bus I asked Emily what she thought of her first activist experience. There was no answer - just a shrug.

Uh Oh, I thought, this is my fault. My barely-buried cynicism has ruined her day! She'll never be an agitator now. "I didn't really want to come," she explained, as I apologized for making her an apathist, "I just kinda thought I should."

Once home, we checked the CBC website for news of our event. It took a while. The item was buried somewhere beneath an article on the Grey Cup - are they really called The Eskimos? - And the Paris "riots". There it was: A "100%" sign and a hundred words.

Ah well, so much for changing the world.

"Activism is hard work," I remarked to my wife as I crawled into bed around midnight.

"Don't worry," she replied, clicking off the light, "Justin will see your sign. Now shut up and go to sleep."

And, you're better approach would be???
Europeans can still draw tens of thousands to a march but we need to be, er, entertained.
Seems like the apocalypse Neil Postman warned us of decades ago. Amusing Ourselves to Death.
Sad emoji.

good to hear from ole Ben. Hope all is well. Nicely written piece. Great to hear of the kids first adventure on such a trip.