Dr Pamela Blais explains how we need to align our pricing, planning and infrastructure policy to achieve our goal of sustainable, prosperous re-urbanization. 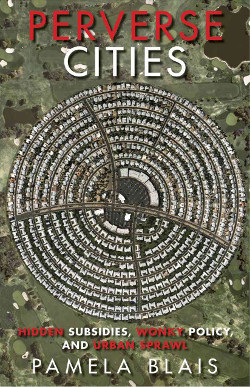 This basic premise is a bedrock law of economics, and it's the centre of a large and growing body of research in cognitive and behavioural psychology. Our understanding of how people's decisions are shaped by the framework of subsidies and disincentives - some overt and some hidden - makes for a fascinating field of research that is yielding some exciting policy improvements in a variety of fields.

But for some reason, this understanding has mostly failed to have any impact on how municipal and provincial governments set the context of subsidies and fees that shape our municipal land use and transportation systems.

One person who is helping to make the connection between the mix of subsidies and disincentives and the choices people make is Dr Pamela Blais, whose 2010 book Perverse Incentives: Hidden Subsidies, Wonky Policy and Urban Sprawl takes a comprehensive approach to the forces that have been shaping the physical form and layout of our cities for decades.

As a planning consultant frustrated with the fact that lofty strategic visions and official plans were failing to translate into more sustainable land use, Dr Blais decided to dig past the usual arguments about "market forces" and NIMBYism to calculate the actual impacts of how cities set development charges, taxes, fees, subsidies and other prices.

What she found was that the way cities price development irresistably pushes it to take the inefficient form of use-separated suburban sprawl, contradicting and undermining the planning goals.

In short, the way we price development is a perverse incentive that encourages stakeholders to make choices that go against our objectives. Until we change the incentive structure to encourage what we want more of, cities will continue to tear themselves apart, subdivision by subdivision and suburban lot by suburban lot.

The City of Hamilton, which has been shaped by this kind of sprawl for decades, is currently engaged in an effort to reverse course and focus on re-urbanizing its long-neglected urban neighbourhoods and citywide transportation nodes.

A major effort in this regard is the recently-announced funding commitment to a new light rail transit (LRT) line running east-west between McMaster University and Queenston Traffic Circle, and north-south from King Street to the James North GO Station and the West Harbour.

However, if we build an LRT system and don't change the underlying framework of costs and subsidies that shape people's choices, the LRT will significantly underperform its potential to shape a more urban, more sustainable, more prosperous reurbanization in Hamilton.

This Tuesday, November 24 at 7:00 PM, Dr Blais will be speaking in Hamilton on what we need to do achieve the major shift in development patterns that LRT promises. 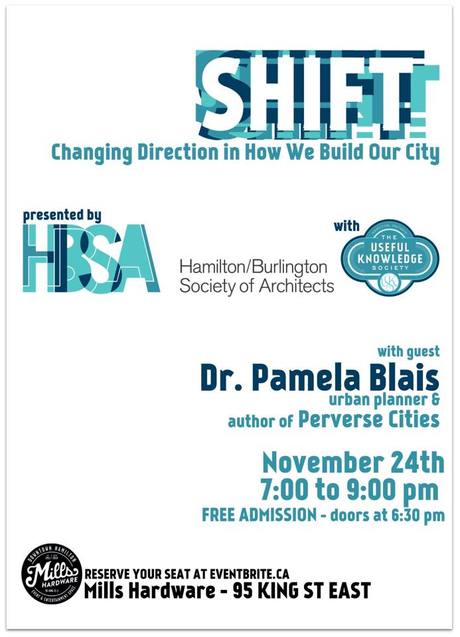 Focusing specifically on the local Hamilton context, Blais will explain how our current system of perverse incentives is driving unsustainable sprawl and what we need to do to change it. Her integrated approach will focus on how we can align the price signals, infrastructure investments and planning policies to attract urban reinvestment.

This free event is being hosted by the Useful Knowledge Society of Hamilton and the Hamilton-Burlington Society of Architects and being held at Mills Hardware, 95 King Street East.

Seating is limited so please reserve your seat.

As a professional Accountant I have seen the effects of even the smallest of incentives. And yes, Hamilton's tax policies are truly perverse. For example, in the city of Halifax, municipal spending on suburban households is over twice as much as urban households. Anyone think Hamilton is significantly different?

Do suburban households pay their fair share? Do they pay over twice as much in taxes? It is to laugh.

In my opinion, requiring people to pay for the true costs of their behaviour is an excellent way to see that behaviour swiftly change.