With clear, no-nonsense prose and well-organized chapters, Bill Freeman's new book calls on the Greater Toronto and Hamilton Area's civic leaders to be bold and ambitious. 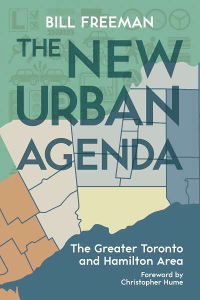 Bill Freeman has done the Greater Toronto and Hamilton Area a great service with his most recent book, The New Urban Agenda, published by Dundurn Press.

The Greater Toronto and Hamilton Area (GTHA) has become one of the largest and most diverse urban agglomerations in North America, despite a long history of fragmented regional planning and a short-sighted approach to infrastructure investment. Successive waves of urban development have produced a region divided into multiple solitudes with conflicting interests and needs: the downtown core, the older inner suburbs and the newer outer suburbs.

Rampant suburban sprawl has produced a built environment that requires enormous amounts of driving and long, grueling commutes, with all of the negative health and environmental harm that follows. Meanwhile, regressive tax policy and the lack of a coordinated housing strategy has created a crisis of income inequality that threatens the integrity of the entire region.

The Ontario Government is finally taking some belated steps to weave the GTHA together. The Greenbelt plan is an attempt to hold the line on sprawl and protect the region's remaining farm land, while the Regional Transportation Plan is an ambitious 25-year effort to play catch-up on decades of lost time building the rapid transit infrastructure the region needs to function.

The New Urban Agenda is essentially an overview of where we are, how we got here, where we need to go, and how well we are doing at getting there. Through ten well-organized chapters, it unpacks the challenges facing the GTHA: confronting the crisis of inequality; managing ongoing reductions in pollution and environmental degradation; building a robust, integrated transit system that makes effective use of public resources; tying effective planning into regional goals; and dealing with the perennial struggle to push local governments beyond their comfort zone of parochial, short-sighted politics.

Freemen's writing is clear and no-nonsense, and he infuses it with the warmth of his personal voice and his own direct experience over many decades as an engaged citizen, community activist, historian and social researcher. He eschews a one-size-fits-all appraoch, taking care to explore the diverse needs of each area within the region.

While Freeman himself is an urban progressive who lives in a close-knit community on Toronto Island, he is clear that a successful strategy for the region must address the needs of the inner and outer suburbs as well as the downtown.

Hamilton readers will enjoy the care Freeman takes to treat the city as a distinct entity within the GTHA with its own history and dynamics that interact with the larger region. Indeed, Freeman argues that Hamilton contains its own microcosm of the downtown/inner suburbs/outer suburbs organization of Toronto and its surrounding municipalities.

Above all, Freeman calls on civic leaders to be bold and ambitious - to face the region's challenges head-on and seize the opportunities to leave a legacy of visionary policies that nudge the GTHA toward a more sustainable, more equitable and more prosperous future.

Talk in Hamilton This Saturday

Bill Freeman is coming to Hamilton this Saturday to give a free talk on his book, The New Urban Agenda.

Just pre-ordered my copy from Kobo. Can't wait to read it!

I attended the event.

Had a long chat with Bill before the event; super-nice guy.

He talked for about an hour. Very jovial speaker. Gave us all a lot to think about.

A few thoughts regarding the event itself And I offer these up not as harsh criticisms, but suggestions, seeing as I've attended almost every 'civic engagement' event this year (And will be attending the 2-day Vision Hamilton event in two weeks), and there are some things that work better than others.

-The middle of a Saturday afternoon immediately limits the potential audience. Especially a hot, sunny summer one.

-The facility...the basement of a church...was too hot. (Two ceiling fans, no air conditioning)

-Civic engagement events need to be highly valued, especially in respect to the audio-visual aspects. (Because of how the Internet has shaped our experiences in this regard, we expect high standards.) I felt that we really were in somebody's basement with an old slide projector, discussing some left-wing cause.

-Never underestimate the worth of a moderator/M.C. No offense to Bill, but the presentation would have been far more effective with Ryan hosting. Yes, this requires a script of some sort, but the focus would have been better. Had there been a suitable a/v setup in combination with a host, the event would have been of a higher quality.

Despite all of the above, a worthwhile event, so big pats on the back to all responsible for its production.