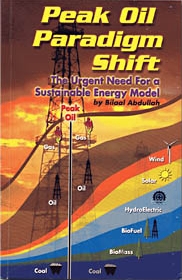 Of the two-dozen or so peak oil subject books and articles I've read, Peak Oil Paradigm Shift stands apart from the others, because it isn't a 'doomsday' book. Granted, it may be difficult to write about the subject of peak oil and petroleum dependence without it coming across as a catostrophic scenario for humanity, but its author, Bilaal Abdullah, does succeed in painting a possible future without oil and energy wars.

Peak Oil Paradigm Shift does a wonderful job of outlining the critical need for society to wean itself off oil before oil weans humans off it. Its intended audience is a reader who knows nothing of the subject. Abdullah is an engineer in Trinidad and Tobago and developed applications for oilfields. He also worked in Venezuela as a consultant for marketing crude oil and refined petroleum products.

However, this doesn't read like a technical book. It argues convincingly that peak oil is imminent and requires a world-wide effort to mitigate and navigate through the upcoming event. Peak oil poses the largest obstacle to face humankind yet, and will require global cooperation. The book doesn't weigh heavily on the fact that the world is getting ready for energy wars like so many other articles and books do. Instead, it makes the case that it was a necessary event for humanity.

Petroleum has had a critical role in helping to develop today's technological and industrial capacity by providing and extremely convenient, easily transportable and versatile source of energy and chemical by-products at low prices. The almost total reliance on oil and natural gas for key aspects of modern life was a necessary stage of human development.

The world community now has the mature technological and industrial base to harness other energy sources to complement and in some cases replace the current over reliance on petroleum. So far, however, the will to do so has been sorely lacking as nations appear to be racing unconcerned toward the precipice of Peak Oil.

Abdullah notes that the world has no contingency plan in place and is vastly unprepared, but given the right attitude shift (paradigm shift) a plan can be made for the future. That plan must start now.

The entire premise for the book is exactly what the title says: we need a fundamental change in attitude and assumptions that oil is plentiful and inexhaustible. We can either plan for the crises or not. We can choose to make it less traumatic or face the paradigm shift imposed on us by increasingly costly petroleum with falling energy returns on energy invested and a much more disastrous outcome resulting from denial.

Denial is our biggest planning obstacle. The North Sea uses the latest and greatest technology. In 1997 the petroleum engineers thought the North Sea Peak was far off, but it peaked two years later. The technology that many believed will save us from peak oil only served to suck the oil out of North Sea faster and thus deplete it faster than other similar sized fields. 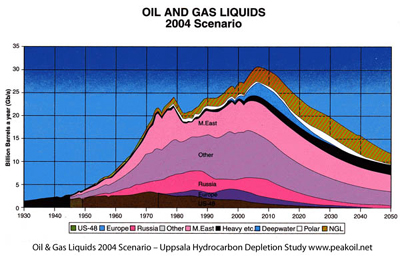 The book carefully outlines our over-reliance on cheap oil. The first symptom of peak oil will be a sudden rise in petroleum prices, countered by a sharp decrease in consumption, then followed by a drop in petroleum prices, tricking the world to believe it's business as usual. This scenario will repeat several times on the way to reaching absolute global peak and our recent 'bounce' in oil prices is just that.

Abdullah stresses the urgency that is needed to mitigate the energy choke points: transportation, food production, and electricity generation. He attempts to find solutions, almost as if it was his responsibility to do so.

Overall the book is well thought out, a quick read and if you only read one Peak Oil book then read Peak Oil Paradigm Shift. Less than a year ago I knew nothing of the subject of Peak Oil until Ryan McGreal talked about it one night during one of our monthly writers' meetings. I have since read as much information as I can about the subject.

Petroleum is fascinating. The fact that the energy contained within its hydrocarbons is stored energy from the sun via fossilized plant and organic matter is very intriguing. It's interesting that oil was once considered a nuisance to coal mining, and that natural gas was once considered a hazardous by-product of oil drilling.

(This was also the first book to explain BTU to me. A British Thermal Unit is a unit of energy. One BTU is the amount of energy required to raise one pound of water one degree Fahrenheit. One BTU is equal to approximately 251.9 calories or 1055 joules.)

The book doesn't make assumptions that the reader is informed on the subject. It also highlights the urgency of the situation with a somewhat contrasting positive future outlook. Bilaal Abdullah has great optimism in the human race overcoming the most serious problem we have yet to encounter.

it is easy if "you" let me with the constuction begining of a never before imagined power plant that all the other can remplace with a power production (output) able to correspond the whole world demand.when you questions about this project then try +34 922580580 and speak easy.