King East Sails off a Sandbar

I look forward to the day – and it's coming soon – that King East and The International Village can shine proudly on the city like it so deserves.

This was the first time a property was seized using the 'conspiracy' section of the Civil Remedies Act, otherwise known as the Remedies for Organized Crime and Other Unlawful Activities Act. The law enacted under Premier Mike Harris gave power to the Attorney General of Ontario to seek forfeiture of money or other property if it can be proved that the property was a proceed of "unlawful activity."

The Walkway on King Street East

A person doesn't need to be found guilty or even charged with committing a crime for the property to be seized. However, the property owner must prove to the Court that s/he did not acquire the asset(s) as a result of committing an unlawful activity. The onus of proof is then on the property owner. The law is being challenged as unconstitutional.

Although drastic, it was passed to help fight what was seen in 2001 as a looming organized crime biker war. The Satan's Choice North End clubhouse seizure was the first of its kind in Canada, alleging the property was purchased with proceeds from crime. The property of two high-ranking Hell's Angels members who lived in Hamilton are among a dozen seizures in the five-year-old law.

Although an interesting application of the law, for the merchants and patrons of King Street East's International Village district this is a huge victory. Mary Pocius, Executive Director of International Village BIA says, "Kudos to Hamilton Police Services for their efforts, and enforcing property owners to be responsible for the activities that take place at their properties." 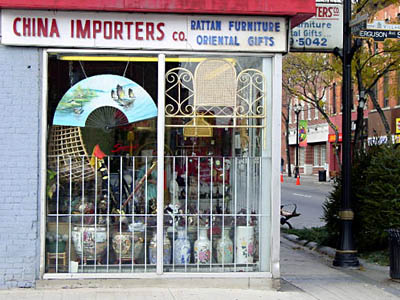 Signs in the window of China Importers (Ferguson and King) indicate a new Kitchen and Bath store is opening soon.

King East has tremendous potential to be a healthy, vibrant urban neighbourhood. In many regards it already is. Recent announcements of developments planned for King William and Fergusson and the St. Deny's building are major breakthroughs for a neighbourhood that struggles to gain recognition that LoSo, Westdale and Concession have. It is a collection of eclectic, galleries, t-shirt shops, jewelry stores, a cannabis café, restaurants, antique, vintage clothing and used shops. 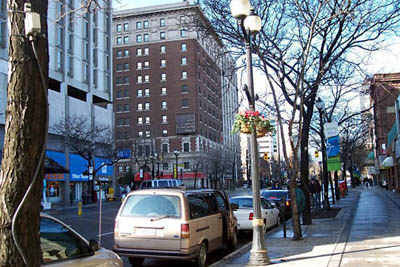 However, the local residential area is one of the highest crime areas of the city, despite the Central Police Station being in the area. Indeed, the area is somewhat an enigma to me. I patronize the area and enjoy it, but at times haven't felt safe.

I talked to a shopkeeper who opened a collectables store (coins, comics, stamps) four months ago. He's a lifelong Hamiltonian and knew the area. He was robbed two months ago.

His store is clean, unique and legitimate, the kind of store that need encouragements to locate there. However, some of the "stores" are a source of the problem. So-called pawn shops are quick ways for petty thieves to fence their "goods," as well a quick way to sell what meager possessions a crack addict may have to feed their habit. When the possessions are gone, their body is only thing left to sell, often performed not far from the source of crack cocaine.

I am haunted by an experience I had at one of these stores. A certain used goods store was recommended to me as I was waiting to purchase a video game controller for my son's discontinued Nintendo. The store seemed to be a warehouse of everything that was stolen from a B&E in Hamilton for the last five years.

A girl not more than 15 years old held up a tiny ring. She was obviously a street person, although she was trying to give every impression that she wasn't. She should have been in school, laughing with friends and talking about boys, but her childlike face had an empty gaze of experiences she shouldn't know.

The shopkeeper looked at the ring for a second and said, "a loonie." She mumbled something quietly and after a few more exchanges she walked away with a toonie. A toonie! I shuttered to think why she needed a toonie or what she would do for ten toonies.

These pawnshops have strict guidelines under which they are supposed to operate. The shopkeeper is required to record names and addresses, have identification produced and most importantly they are not supposed to give money right away. 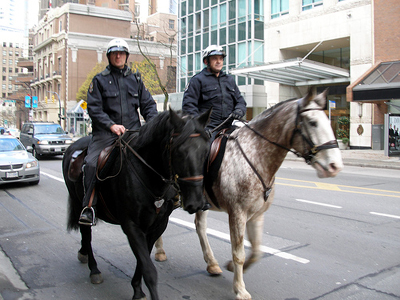 After leaving the store, I recalled a conversation I had with a Buffalo beat cop many years ago. He was an old fashioned Irish cop who swung a well-dented night stick with circus-like precision. He was the kind of cop you'd want walking on your street at night.

After a few moments of talking it was obvious to me that he enjoyed walking the beat. I was so very intrigued as to why he did this type of police work. He told me very simply, "Sometimes it's the only thing that works." 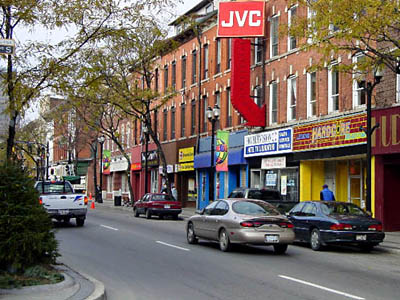 King East and International Village is an old urban neighbourhood, built around walking. There are alleys, back laneways, frequent side streets and second and third floor apartments over the street front retail. It is a very different experience from walking along King East and from driving 45km/h on King East.

The only effective method to police such a neighbourhood is by foot patrols. Mary Pocius notes that as of March new officers will be on foot and bicycle, this is an increase to the existing foot patrols in the area.

For more information, visit the website of the International Village BIA: http://www.hamiltoninternationalvillage.ca/ 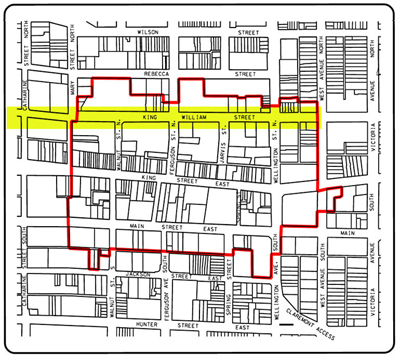 I've always been curious about those pawn shops but I've always been wary to go in. It looks like there are layers of books and electronics collected and forgotten over the years. I'm also not sure many of those things were bought from their true owners. It looks Pulp Fiction scary.

Police add officers to core patrol Mar, 22 2006 - 11:00 AM HAMILTON (AM900 CHML) - Hamilton Police have beefed up their downtown core patrol. Greater visibility, more officers and a larger coverage area are the benefits of today's announcement. Seventeen officers have been assigned to the upgraded core patrol---an increase of 25-percent over last year. Mayor DiIanni, downtown councillor Bob Bratina, and members of all 5 downtown Business Improvement Areas are ecstatic---calling it a key step in the improving downtown safety and helping with revitalization. Core patrol boundaries have moved from Wellington to James, to Wellington to Queen, including James Street from St Joseph's Hospital to Liuna Station.

This article seems to ignore the imense social problems which exist downtown. While nobody can deny that taking control of the sandbar is a positive move and can only improve the situation on King east. However there are a number of things that concern me. I would be very disappointed if King E was developed using a Yorkville type template or if it goes the way of Queen west in Toronto pushing all the city's poorest people into other areas. Downtown is full of interesting people and it has a culture of it's own. Encouraging suburbanites to the neighborhood will do nothing to foster Hamilton's unique culture. The core of Hamilton is also unique in the way that it has some of the highest unemployment in southern Ontario, as well as some of the lowest income levels around, Which has been documented in the spec. Also, I don't have any sources for this one but I think there is some truth to it, there is one heck of a crack problem down there. Something must be done to improve the employment and drug issues that exist in the area. These are major factors to be considered when planning developement in the area. These problems must be dealt with and the province can't seize every property peddlin' crack no matter what the police chief says. This quotation is taken from the March 9 story that appeared in the spec about the sandbar seizure ""Hamiltonians can expect to see more activity like this in regard to those nagging locations that are creating so many neighbourhood safety issues," Mullan said. He promised to use it against booze cans selling illegal alcohol, marijuana grow operations and prostitution. "It is our intention that when we need (to use it) we are going to. "I guess it is a heads up for all the crooks out there," said Mullan. "You'd better sit up and take notice Hamilton police are now actively involved in the application of this type of legislation."" While I do not disagree with the seizure of the sandbar I can't condone the use of this law on a regular basis. I think that the sandbar was a one of a kind type of operation, and hearing the police chief talking like this is the solution to crime in the downtown eastside really concerns me. I think that it would be wise for us all to keep a close eye on what the police are doing, and whether they are truly helping the community.

I was robbed two years ago. Two days after I discovered my stolen CDs and DVDs piled together in the pawn shop next to the Dollar Joint. I remember that one of the CDs had a certain crack in the front of the case. I checked to make sure if it was there and sure enough it was.

When I pointed out the crack on the CD and specifically chose another CD from the pile that had a crack in a specific spot, without first looking at it, in front of the owner to prove to him I wasn't lying he said, "if you want that you have to pay for it. They're a dollar each".

I've often seen teenagers bring bikes out front of the place for 5 bucks a place. He deals with them right in broad daylight, often the same teenagers I've seen, as I often pass the area since I live nearby.

The police won't do anything about it. I've been told that pawn shops can take items from anybody and sell them without doing any sort of background check, logging, or recording of identification as long as the cost of the items sold is under a certain amount.