It's a Sprawl World After All

It doesn't make a strong case connecting violence to sprawl, but this book does a great job of offering concrete solutions. 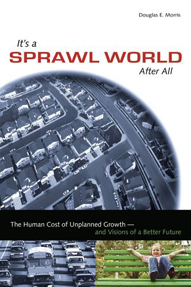 Douglas E. Morris's It's a Sprawl World After All is actually two separate essays lumped together. The first is the essay advertised on the book's jacket and in its promotional materials: "the first book to make the startling connection between suburban sprawl and the violent breakdown of American society."

The second, which takes up more than half of the book, attempts to chart a course forward from today's legacy of sprawl development to a tomorrow filled with livable neighbourhoods and communities (more on this below).

Both sections are well written on a purely grammatical and artistic level. Morris is a talented writer with a lively voice, and his book reads like a delightful conversation over coffees on a sidewalk bistro. Unfortunately, marketing Sprawl World as an investigation into sprawl and violence created an expectation that the contents didn't meet.

I have long suspected that the violence, depression, and anomie that plague modern life are connected with the physical and social isolation of sprawl development. I would have been easy to persuade, and was really looking forward to a book that developed both a plausible connection between sprawl and violence and a persuasive foundation of evidence to correlate the two and account for other factors.

Unfortunately, the book disappointed me on both counts. Morris does sketch out a cause and effect relationship, but he never descends from high-level statements to the nitty gritty details that distinguish a good social science theory.

Further, he provides virtually no evidence to undergird the connection, aside from some national (United States) crime statistics that he does not break down by region, population density, or building mode (mixed use vs. zoned).

He does produce evidence of rising rates of violence over the past 60 years and in comparison to other countries, particularly regarding assaults, sexual assaults, and serial killers. However, aside from demonstating the well-known fact that America is right off the map compared to the rest of the industrialized world, Morris does not manage to tie America's violent culture to its built environment.

He fails to explain why America's rate of violent crime is so much higher than, say, Canada's, even though both countries have followed similar patterns of sprawl development.

On page 86, he introduces John Douglas, Rolf Loeber, and Felton Earls, specialists on serial violence, psychiatry, and child development respectively. They "all agree that the number one factor that turns individuals into violent offenders is spending a limited amount of time with responsible, caring adults as children."

Then he moves on, leaving this tantalizing thread hanging instead of tugging on it to see where it's attached. This really is the crux of his thesis, and he devotes all of six paragraphs to its implications.

On page 93, Morris introduces the second part of his book, simlpy titled "Solutions". This is where the book redeems itself, because he dedicates the next hundred pages to a detailed, step-by-step examination of what people can do to find and create real places, from seeking out or starting "niche communities" around shared interests to transforming the regulatory structure that perpetuates sprawl.

Along the way, he champions becoming socially and politically engaged, getting out of the car, turning off the TV, raising the gas tax, diversifying transportation, and creating places where people's social and cultural needs can be met - particularly children, whose emotional and social development depends so completely on the various ties and interactions made possible only through a real community.

The appendix, entitled "How Sprawl Came to Be," is one of the most engaging sections in the book, explaining in detail what historic, political, and social forces conspired to invent sprawl in the first place. It's required reading to get the most out of Morris's solutions, and I'm sorry he didn't place it closer to the front.

In one sour note, Morris often cites Celebration, Florida as an example of how more coherent communities could be built. Celebration is a private planned community created by the Walt Disney Corporation, a real-life version of the Main Street, USA facade at Disney World.

Celebration's master plan closely follows the garden suburbs made popular at the turn of the 20th century, a community planning zenith that realized the potential for healthy suburban development, but it's burdened by cartoony architecture, a touristy town centre, and the heavy hand of a corporate city management.

I don't know; perhaps I'm simply depressed that the best example of healthy suburban development in America comes to us from a live-in theme park instead of a real town. This subject really deserves its own essay, but in Morris's defence, Celebration does seem to demonstrate that architecture can influence people to be more neighbourly.

In the final analyis, don't read this book if you're looking for a compelling argument linking sprawl with violence. Instead, read it for its detailed, accessible history and analysis of sprawl itself and its hopeful articulation of a way out of this mess.

It's not the first book to do this, but it does so in a way that will relate to readers who are not already familiar with the issue.

"It's A Sprawl World After All" I certainly won't be buying the book after your analysis.The proposals the book offers are sensible ,but hardly original. Sprawling neighbourhoods are ugly,often built in straight lines reminding me of the British Council houses ,and even though the houses sometimes are quite highly priced there is something lonely and disconnected about them.So often they are deserted during the day.You usually need a car to go to anything that is enlightening ,fun for the children ,or related to an active engaged life. Of course, the car allowed us to do this ,but by now after a hundred years of living with such mobility we surely should be able to come up with more interesting neighbourhoods for our children to grow up in .Is there proof that sprawl is fodder for violence?By it's very lonliness I would say that there probaly is some truth in this statement.If we ,in fact believe "it takes a village to raise a child" sprawling neighbourhoods are definately not doing the job for our families ,as we believe. A challenge to architects and developers to create more liveable spaces for us to spend our lives in would help bring about change. The car is still King,but this could alter in the next fifty years,and suburbs may become the slums of tomorrow if we don't create more compact ,and useful communities. So,RTH what about the planners big challenge to develop the new community that serves it citizens well,and encourages a friendlier space for families to live without having to use the car for every commodity they need.