Men who rape are not mentally ill or sexually depraved but rather ordinary men with a desire to exert power and control.

Canadian society was founded on a colonialist model that supported patriarchy. Men, especially men of privilege, developed a sense of entitlement to exert power and control over certain groups, one of which included girls and women.

The basis of rape culture is men believing it's their inherent right to use power and control over girls and women.

They accomplish this by normalizing violence against women and reinforcing the myth that the survivor is to blame. Conversely, these institutions can choose to make a difference by supporting women's rights - which, quite simply, are basic human rights. 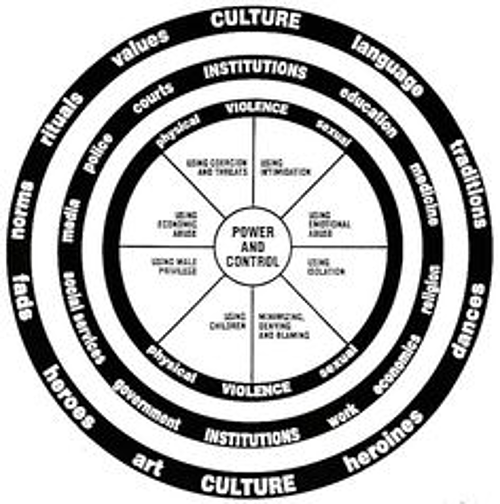 When women are sexually assaulted, in most cases men are the perpetrators. These men come from a wide spectrum of economic, ethnic, racial, age and social backgrounds.

In 80 percent of cases, the assailant was known to the survivor. These men include health professionals, police officers, military personnel, teachers, professors, employers, coworkers, religious leaders, coaches, lawyers, neighbours, dates, boyfriends, relatives, and partners of the women they sexually assault.

Because the survivor knows the perpetrator, the assault is often not recognized as a crime by either the survivor or the rapist.

Alcohol is often blamed as a mitigating factor in rape. Clearly a double standard exists where alcohol consumption by an offender is often used to excuse their behaviour, while survivors who were drinking are blamed for their own victimization.

There is no evidence that mental illness causes men to be violent against women. Men who assault women rarely assault their friends, neighbours, bosses, or strangers. A man suffering from a mental illness is unable to turn it on and off at will.

In her book, "An Analysis of Violence Against Women: A Manual for Educators and Administrators," (Toronto: Ontario Institute for Studies in Education, 1992), Helen Lenskyj found that men who rape are not mentally ill or sexually depraved but rather ordinary men with a desire to exert power and control.

Rape is a premeditated act. Rapists choose vulnerable woman and when the opportunity arises they force her to have intercourse without consent. It is an act of violence involving power and control.

About 6 percent of all non-spousal rapes are reported to police. Between 96 to 98 percent of reported rapes are true. Low reporting is often caused by a fear of:

Racialized women often have life experiences that cause greater distrust of police and the legal system. This further compounds under reporting of this crime.

A cursory examination of Canadian institutions can be enough to understand why women find it difficult to disclose sexual assault and rape.

Earlier this spring the Ontario government created the Minister's Sexual Abuse Task Force to review the Regulated Health Professions Act, 1991. This is the third such task force in 24 years.

According to the Native Women's Association of Canada (NWAC):

Aboriginal groups continue to request a national inquiry into the systemic causes that have led to the growing list of missing and murdered Indigenous women. While the Harper government staunchly refuses this request, Canadians are finding out the causes thanks to our media:

These stories expose the vulnerability of Native women when the institutions in charge of protecting their rights, and their lives, fail to do so.

The problem is named as an imbalance of power but the recommendation that an independent body be established to review reports of sexual misconduct has not been enthusiastically adopted by military leaders.

Acts of sexual harassment and assault are actually condoned by military leaders who see the army as a "reflection of society."

Sadly, that may very well be the case.

All of this leaves me asking: who are the men that girls and women can trust? Where are the role models for our boys and young men?

Really, so by your logic all men and boys are rapists? I understand the problems and things do need to change, I just can't see your point when you seem to paint all men with the same brush. I will guess you are in a relationship? are you scared of him or is he the only man in the world who would not sexually assault a woman? If you would take the time to make your own points without quoting every one sided report maybe people would listen to you. I respond better to well thought out points and love to have two sided conversations, not be told how I should think and how I should act. I am a Husband, Father, and Friend to many women and treat them with the respect they deserve. I have read some of your posts her and it seems you believe men are the cause of all the worlds problems? There is good and bad in all of us, if you only look for the bad that is all you will find.

"Really, so by your logic all men and boys are rapists?"

You must have read some other article and then left your comment on this one.

> All of this leaves me asking: who are the men that girls and women can trust? Where are the role models for our boys and young men?

You're chasing them away, downvoting them, destroying any compassion they might have had for this issue, showing a complete lack of concern about collateral damage to good fathers and husbands, while still expecting us to charge to the rescue somehow. How? By looking through walls of other homes to spy on what other men are doing in their homes? The last domestic assault I witnessed and called out, both the man and woman told me to get lost. It's a no win scenario, even for the men who do care.

In the most recent article - "Silence is consent". Uhm, no. Contrast with "You're either with us or you're with the terrorists" ~George Bush.

I am glad your total stupidity and ignorance will be gone from this site. The fact that after reading this article (and the others) you come to these conclusions shows how mentally deficient, ignorant and deeply paranoid you are. You have proven Doreen's points to the nth degree.

I'm not ready to flounce, myself ... but I am left wondering just why these articles are on this site. I'll not argue with anyone who thinks that "Healing Gaiai" is more important than discussing Hamilton bike lanes or bus-route priorities. But it's pretty plain that these articles have no direct relation to civic politics, city planning, or local activism. We might just as well be reading about boycotting Israel, banning firearms*, or restricting abortion.

Yeah, forget issues of rape. Bring on the LRT, baby.