The city has ordered the owner of the vacant property to comply with an order not to park any cars on the footprint of the demolished office building.

The City has issued a notice of compliance to the owner of the vacant property 20 Jackson Street West for violating a bylaw that prohibits property owners from demolishing a downtown building and putting surface parking in its place. 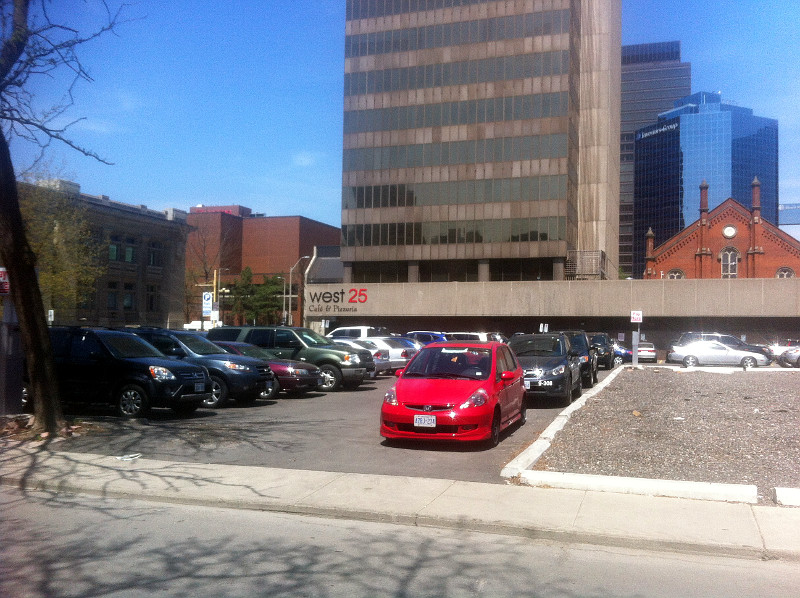 He has been given until May 8 at midnight to ensure that no cars are parked on the footprint of the former three-storey office building that was demolished in late 2013.

This is not the first order the property owner, Wilson-Blanchard, has received for this property. The company turned the footprint of the demolished building into an illegal parking lot after demolishing it.

The City investigated the site in December 2013 after being alerted to it, and they issued an order to stop using the site as a parking lot.

The owner responded to the order in January 2014 by blocking off a rectangle of the property with raised curb stops.

Here is a photo of the lot taken yesterday, looking from the southwest: 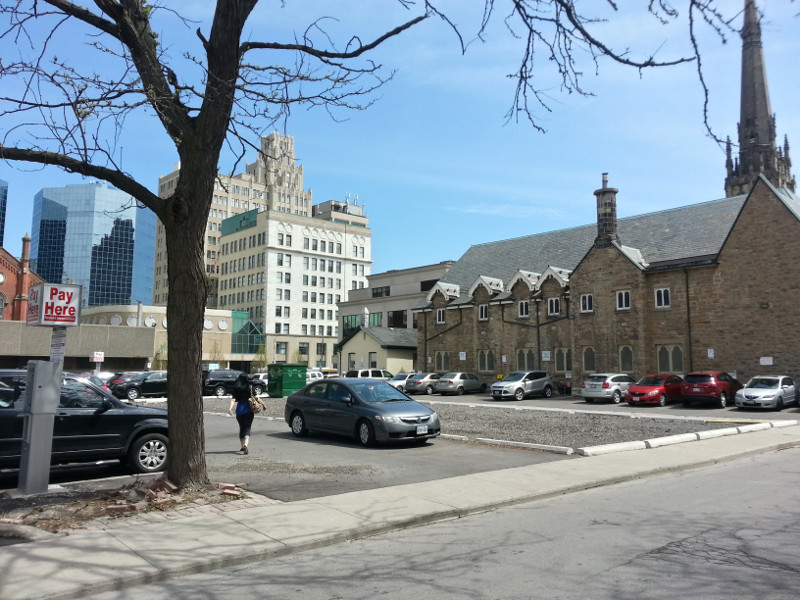 For comparison, here is a screen capture from Google Street View showing the property when the building was still in existence: 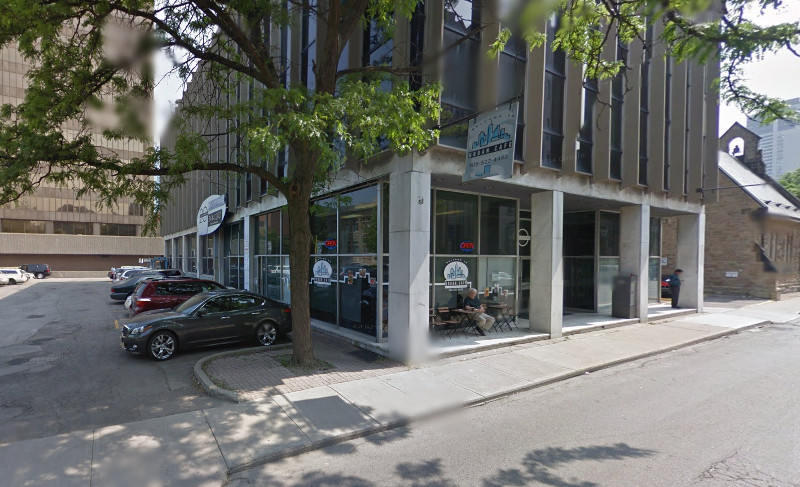 In particular, look at the location of the tree and the rounded curb bumpout near the bottom left.

When the building was still standing, its footprint extended to at most one metre east of the tree trunk.

However, the blocked-out portion of the lot ends several metres east of the tree trunk. In the current photo above, you can see a car stopped there as it prepares to pull out of the parking lot.

The property owner might try to claim that since that section is serving as an ingress/egress lane for parking cars rather than parking spots, it does not violate the bylaw.

This seems to be a specious argument: the driving lanes in a parking lot are as much an essential part of the lot as the parking spots themselves. Cars do not simply drop into parking spots from the air: they must be able to drive in and out.

The City's Licencing Division was notified and an officer was dispatched on-site today to investigate.

Al Fletcher, the City's Manager of Licencing Inspections and Enforcement, sent RTH the following email to explain the City's response:

Our Officer has investigated. The original agreement was that the use of the parking lot could not create any new parking spaces. The owner blocked off a portion of the property with curb stops and was permitted an access lane to be used for vehicle movement only to assist with the stacked parking of cars being more easily manoeuvered.

We felt this to be a reasonable compromise given there was no net increase in parking spaces and only created more efficient movements. No further complaints were received.

The property owner was just in contact with the Officer and same explanation provided.

Update: updated to add the response from Al Fletcher and a photo of the lot with cars parked on the building footprint, which was submitted by an RTH reader.

Take a look beside the Pigott Building on James S. The footprint next to this building is supposed to be blocked off as well, but lately I have seen the curb barriers pushed aside and cars are parking there too... I believe this was once the Royal Bank building (next to the former Robinson's building and the CIBC towers). Another Blanchard wasteland.

It was a bit of a shock to realize that Wilson-Blanchard is the Property Manager at the Condo Building where I live. I'm going to write to them about this. I am embarrassed that our management has a notorious reputation in Hamilton for ignoring the City's land use By-laws. Property Management Companies survive largely on the strength of their reputation. This article shows that Wilson-Blanchard's reputation is looking pretty shady, do we really want them managing our building and our money in common element fees and trust funds?

Maybe others who live in W-B buildings should do the same. Print this article and post it on Facebook and the resident/tenant bulletin board. Tweet about it, talk to your neighbours. Perhaps we can help the City put real pressure on these arrogant people.

WB is not the company that they used to be. They have begun neglecting their sites and denying residents necessary repairs, while rewarding their board members with personal improvements, to ensure their contract is renewed.

Surely your Condo Board can replace the "Property Manager" at the end of their current contract.

Run for a position on the board and ensure it happens.

Actually, thanks to the Condo Act, there is a loophole allowing you to fire and replace your management company in as little as 30 days.

As I walked to work today I noticed that cars were actually parked along the side where you see the car exiting in the picture.

Anyways, doesn't matter since developers can do whatever they please in this city with a slap on the wrist being the worst punishment they can ever expect to receive.

If you run a not-for-profit charity owned thrift store in a neighbourhood the city wants to gentrify, watch out though. The city will find a way to kick you out. The politicians and residents of this city are losing their integrity and it is shameful.

Yale parking lot appears to be for monthlys

A few weekends ago there was a movie shoot on Jackson Street, and the footprint section was full of trailers.

"The owner blocked off a portion of the property with curb stops and was permitted an access lane to be used for vehicle movement only to assist with the stacked parking of cars being more easily manoeuvered. We felt this to be a reasonable compromise given there was no net increase in parking spaces and only created more efficient movements"

Why do we need to compromise on a law that is designed to limit senseless demolition. Why have the law at all, if you're not going to make it effective? It is the thin edge of the wedge to illegal parking lot operation , which the operators have brazenly done. The order should be to block off the entire footprint or we start piling on the fines.

How much did your property tax go up this year? Mine went up 2.7%, and when MPAC gets done with me, it will be closer to 4 %. Electricity and water also went up, so that is essentially a tax increase aw well. So when people dodge taxes by knocking down buildings, you're damn right it affects me. Just because you're too thick to see that connection, it doesn't mean I need to get a life.

So if I bought the houses next to your place and knocked them down and turned them into a gravel parking lot, you'd be okay with that?

You may not care, but surely you can understand that many Hamiltonians resent the fact that Blanchard is profiting from the careless destruction of large swaths of our built environment; this IS our business. Do you honestly support demolition, or demolition by neglect, that leaves behind giant, vast streetwall gaps and gravel lots?

Why does the city reward property owners by reducing their taxes if they tear down a building without plans of rebuilding? It could very easily do the opposite; keep the tax rate the same as before, and add a significant penalty amount for each month it sits undeveloped.

This is an interesting question.

The City controls demolition permits, but must adhere to the law in granting the permit. If the owner complies with the law, the City must issue the permit.

So, they are not being rewarded per se. They are using the current rules to their advantage.

It has long been argued that the way property is taxed is unfair and discourages development. Paint your house - your taxes go up. Put on an addition or pave your driveway, your taxes go up.

Keep in mind that municipal taxes are intended to be raised for municipal purposes. There are lots of alternatives to raise money for the services that are used, poll taxes, car use taxes, licenses etc. Most of those are user pay and are considered to be "regressive."

Maybe there should be some reduction in the linkage between property values and taxes. With some standard simple flat tax - one that would not be reduced when the value of the property decreases and applies simply because the land exists in the City. And then maybe some use taxes - i.e. a vacant land tax, car lot tax or a temporary relief followed by mandatory return to the original tax if development does not occur within a specific period of time. It would require thoughtfulness and extra cost in policing the tax.

After dealing with Wilson-Blanchard, I have the impression they are white collar thugs. I have a family member who is "limited" living in a complex Wilson-Blanchard manages. My relative was sent a letter falsely blaming her for a violation. The lawyer who wrote the letter tried to trick my relative into paying him for writing the letter. Another resident admitted being the culprit of the violation. I expressed my concern about this incident to Wilson-Blanchard, who said I must refrain from contacting them again.

Thanks for starting this very important post ! What´s needed is for the people of Hamilton to stand up and show bad companies that destroying Hamilton´s heritage is bad for business! That´s the way this crap will stop. Thanks everyone for caring !