First Place: A Place of Firsts in Hamilton

The corner of King and Wellington has a history going back hundreds of years. 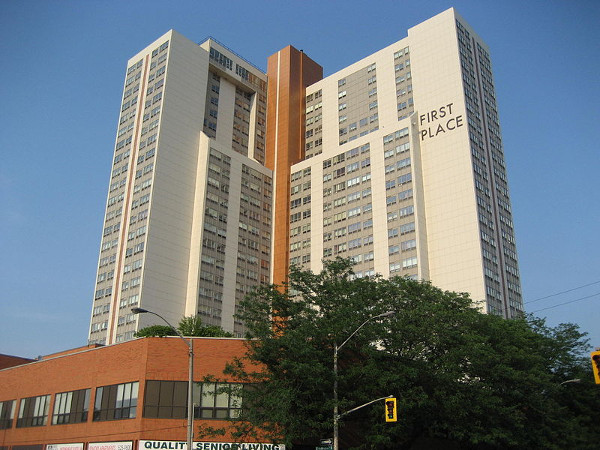 Our fair city of Hamilton is part of a larger geographic unit called The Head of the Lake. In the Silurian Age, a mighty falls called Erigen plummeted hundreds of feet into an ancient sea, populated by creatures of enormous size.

By the time of the last Ice Age, this sea had become a more manageable body of water called Lake Iroquois, part of whose shoreline stretched from Burlington Heights, going across present day Victoria Park and ending at the foot of escarpment at John Street.

Acres of nondescript pavement and the right angles of concrete towers have forever erased the jagged irregular lines of the verdant forests and swamps that was Hamilton. The continuous whir of motor traffic, that seeps even into the deepest back alleys has stilled the sweet warble of song birds and baleful howls of coyotes.

By 1815, the winds of war which blew so fiercely at the Head of the Lake, making it the very pivot of survival of British North American had subsided.

Shortly, George Hamilton and Nathaniel Hughson would each donate a parcel of land for the building of a jail, registry office and courthouse at Main and John in the new settlement called Hamilton in the District of Gore.

The dusty corner of James Street (named after Hughson's son) and King Street would soon become the mercantile center of Hamilton.

But one mile to the east, the broad corner at Wellington/Victoria and King, where an sinewy inlet reached all the way up, from what was then known as Macassa Bay was a more important junction in the region, a crossroads steeped in history.

King Street was a long-distance native trail that winded its way to points far east and west. The many jogs this major artery makes today is evidence of this.

At Wellington Street, another trail came up from the bay. It has even been conjectured that the final vanquishing of the indigenous Neutral Nation by the Iroquois' Confederacy took place just off this trail in a great battle in 1651.

The builders of future St Patrick's Roman Catholic Church had to go down eight feet to establish a solid foundation because of the cedar swamp located here.

It was even proposed that the watercourse, which came to be known as Land's Inlet after the first settler in the region, be dredged and a turning basin dug to allow shallow draft vessels come inland.

At the corner of King and Wellington, where the Freeway Café is today, Smith's Tavern served travelers various needs for many years.

It was at this way station that the first charted organization in Hamilton region was birthed: 'The Barton Lodge of Ancient and Free Order of Masons'. 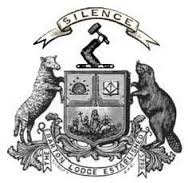 Various Masonic groups, including the Scottish Rite, who lodged themselves in tobacco king George Tuckett's palatial home at Queen and King Street all spring from this humble beginning.

Diagonally across from Smith's Tavern was the first church built in Hamilton (1824)- the Methodist 'White' church, a model of which can be seen today at Pilgrim's United Church at 200 Main East.

A graveyard holding many of the co-founding patriarchs of The Barton Lodge and The First Methodist Church was located next to the modest frame structure. 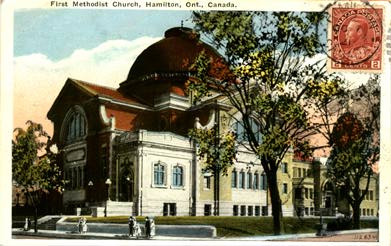 The Methodists of Hamilton would jettison the circuit riders, camp meetings and 'fire and brimstone' sermons and come to erect a cathedral style edifice at King and Wellington, a great domed structure which melted down to runny sap in a suspicious fire in 1969.

It is important to remember that almost all Protestant faiths in North American were closely aligned with Freemasonry. The dedication of public buildings and funerals of public figures in Hamilton in the 19th century incorporated Masonic rituals.

Masonic groups were set up in re-consecrated churches, such as Dufferin Lodge on #8 highway in Flamborough, which exists to this day. 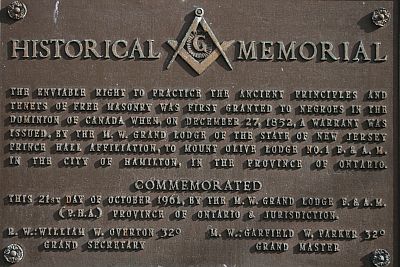 The Church of England knew the importance of the Wellington/Victoria/King nexus and in 1870, St. Thomas at West and Main, now Charisma evangelical church, became the third Anglican church in Hamilton.

In 1875, Bishop Peter F. Crinnon, the second bishop of the twenty year old Roman Catholic diocese of Hamilton purchased, for the princely sum of $10,000, a plot of soggy land from Ephraim Land, the youngest son of Robert Land. 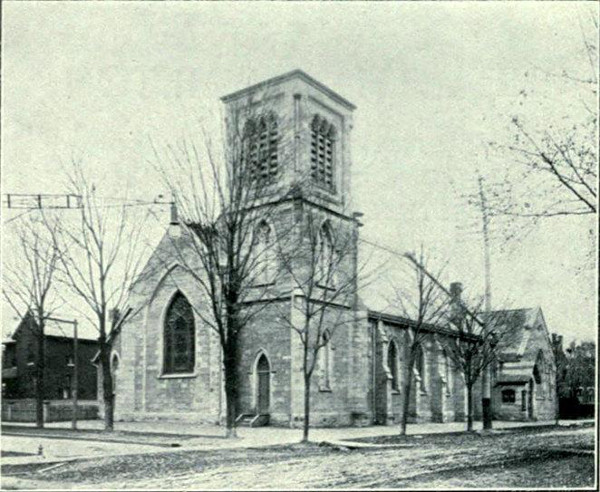 Crinnon had the foresight to realize that Hamilton to the west would grow eastward. Successful merchants Ebenezer and Thomas Stinson were building houses along Main Street, all the way to Wentworth and King.

One of these commodious house, at the southeast corner of East and Main where 'Connect Hearing' is today would become St.Patrick's Parish Hall.

Bishop Crinnon's lowly Irish countrymen were well settled in Corktown, to the west of 'first place' by 1875. Their little 'workers' cottages were tended with great pride. Many of the Emerald Isle's émigrés had found employment in Hamilton and Lake Erie Railway and its workshops and yards. 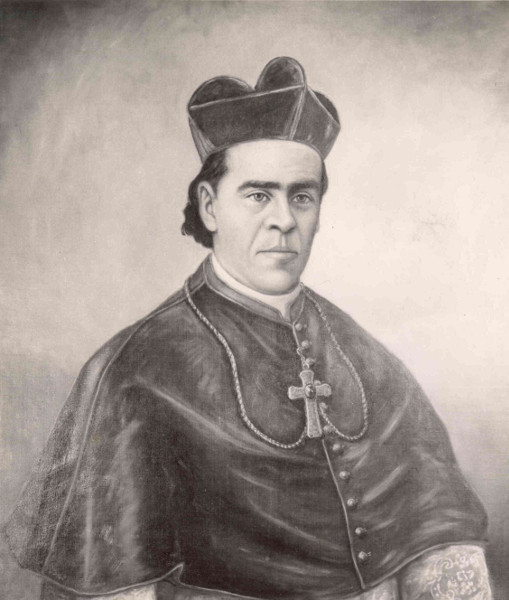 Others would later find work on the Toronto, Hamilton and Buffalo(THB) Railway which had a switching yard, where Corktown Park is today.

Bishop Crinnon and the first pastor of St. Patrick's, Peter Lennon, lived in the diocese's first presbytery on Hunter St. at East Ave. The Catholic bishops of Hamilton have always given St Patrick's special attention in their ministrations. 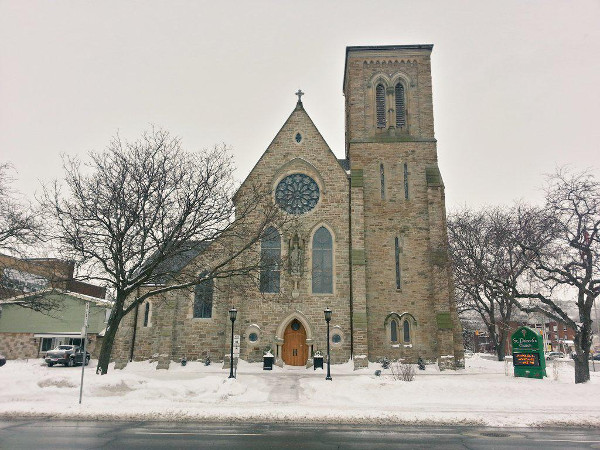 In fact, from 1927 to 1933, St. Patrick's was the Cathedral Church of the diocese until 'Christ the King' Cathedral in the west end was constructed.

In summation, First Place at King and Wellington/Victoria is truly aptly named.

2. Campbell, Marjorie Freeman. A Mountain and a City: The Story of Hamilton. McCelland and Stewart Limited TO/Montreal, 1966.

Joachim Brouwer is a member at large of the City of Hamilton's plaquing sub-committee of the Hamilton Historical Board and the Municipal Heritage Council. Joachim also belongs to the Gibson Landsdale Neighbourhood Hub and the Head-of-the-Lake Historical Society.

Great Article. I had the fortune (misfortune) to watch the First Methodist Church burn down on my way to play football at Eastwood Park one Saturday morning. What a tragedy. I actually saw the dome cave in. If it existed today it would have been a fabulous landmark. Good for its members though that their forsight has helped so many elderly and infirm in turning their loss into a gain. (Luckily for us, the arsonist who also attempted to burn down St. Pat's and St. Thomas', seems to have stopped or died.)

Thank you your comments. Was St Thomas at West and Main `fired' too. St John and Andrew at King and Emerald also burned down in 1969. There are speculations that two successful arsons were done with some level of complicity by church directors. The land was becoming too valuable and insurance payoffs would have astronomical.

Joachim Brouwer is a member of the Joint Plaquing Sub Committee of Hamilton Historical Board and LACAC, Hamilton Mountain Historical Society and Mad Pride Hamilton.

I only know about the arsonist through rumour and as reported in the newspaper at the time. I believe St. Thomas' was one of the churches that was struck over a number of years in the downtown core. At the time as reported in the paper, the police beleived that one individual was likely responsible for several church fires including the ones talked about here. This would make an interesting bit of research. Never heard about the theory that someone inide the church was responsible. Also, the arsonist didn't seem to care what denomination he hit.


Minor correction. It was actually the First United (formerly Methodist) Church that burned in 1969. In 1925 the United Church of Canada was formed through a merger of Methodist, Congregationalist and some Presbyterian churches. After the fire the First United congregation opted not to rebuild, First Place was constructed instead and they joined Pilgrim United to form First Pilgrim United.

You are totally correct. Did you know that Lester Pearson's father was a preacher/parson at this `First' as well as other Methodist churches in Hamilton. The plaquing committee I am part of has prepared a plaque on the home the Pearsons lived in on Catherine St.

Joachim Brouwer is a member of the Joint Plaquing Sub Committee of Hamilton Historical Board and LACAC, Hamilton Mountain Historical Society and Mad Pride Hamilton.

Perhaps another plaque is in order. At the time of the fire First United had a team ministry, Rev. Roy and Rev. Lois Wilson. In 1980 Lois Wilson became the first female Moderator (leader) of the United Church of Canada after serving as a founding board member at First Place. She went on to earn the Order of Canada. Curiously, she was also awarded the Pearson Peace Prize in 1985. Keep up the good heritage work!

Joachim, thanks for the early history and the imposing picture of First Place. In the late 70's and the 80's there were many enterprises in the first two floors with seniors apartments above. Optometrist Zahoruk and another one, Family Services, Equitable Life, Canada Mortgage and Housing Corp, Dentist Paluch, Jubilee Consultants who ran the building (Rev Gary Quart. The building was always under some sort of renovations as it was badly constructed by an unreputable builder in Hamilton who will remain nameless. Finally after years of heavy vacancies the seniors apts were converted into assisted care and the balconies were enclosed. There was a community legal services clinic on the ground floor west avenue and the Red Cross nearby. There used to be a lot of commercial activity in the area and the shops on King and Wellington were busy with Denningers and others. CIBC bank was on the corner. The Runnung Pump tavern did good business.
That whole area has changed now. It used to be great back in the day.