It may be one pane of glass, but it truly is a symptom of everything that is going wrong with transit in the City of Hamilton.

About 3:00 AM Sunday morning, I was returning home from a gig in Grimsby. Driving into Dundas, I came up on the bus stop that I use every day on my way to work at the corner of South Street and Ogilvie. One of the panes of glass was shattered into a million pieces. I thought to myself that it sucks and seems to happen much more than it should throughout the City of Hamilton and honestly didn't think much more of it. 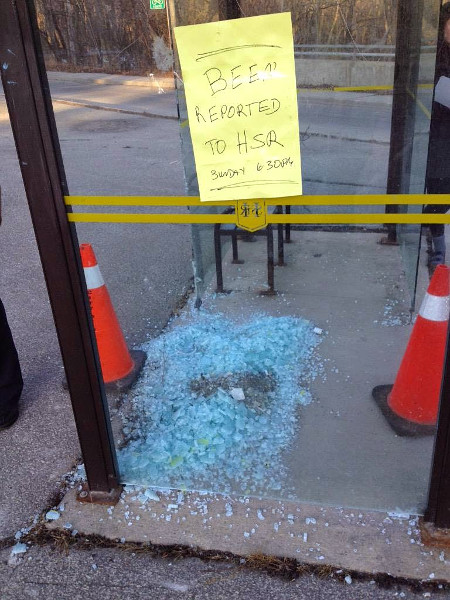 By Sunday night someone had swept the glass into the bus shelter and placed a couple of pylons around it. A note was placed by someone on the shelter indicating that the Hamilton Street Railway (HSR) was aware of the issue.

I was surprised that it was still in that shape and disappointed that the no one had swept the glass into a container and removed it, but I figured it was the weekend and maybe the City had a rash of these that they were working on.

By Monday morning when I had to walk to the bus stop, it was evident that nothing was being done about the mess. I took a picture and uploaded it to twitter, tagged my Councillor and the City of Hamilton. Until the writing of this I have had no reply from either account acknowledging the issue.

In the age of social media that in and of itself is shocking. This is the perfect example of the HSR needing a social media presence. A social media manager would have picked up the tweet and been able to advise of what was being done to fix the issue.

I have been advised from a friend who is a bus driver that the HSR doesn't have anything to do with the shelters and that it is a City issue.

If that is the case, I wonder if a single bus driver reported to anyone that the glass was shattered or if they are even required to do so. If not, what does it say about the state of the transit system in this City?

It may seem like such a small thing but I honestly think that this is a symptom of the overall sickness that is pervasive in the HSR and the way that it has been mismanaged and underfunded for the past 20 years. It is also indicative of how poorly this City is being run currently. 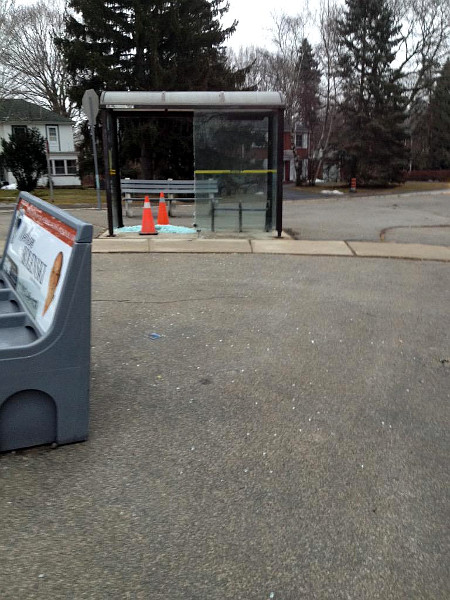 Thursday morning and the broken glass is still there

It is unacceptable that as of Thursday morning, the glass has been sitting in the shelter for five days and counting.

It is appalling that the bus lane on King Street was removed on the say of Councillors who have little to no skin in the game.

It is insane that Council has muddied the water of the light rail transit (LRT) ask by including a request for an additional $300 million, with almost all of that money going to a garage that costs more than Tim Horton's Field or replacement for Copps Coliseum.

It may be one pane of glass, but it truly is a symptom of everything that is going wrong with transit in the City of Hamilton. I don't see it getting any better anytime soon.

Update: updated to add a photo of the shelter on Thursday morning, with glass still piled in the shelter and scattered around the area.

Love it ... imagine the possibilities here with the various inaction that goes on and seems to be permitted.

My favorite: "One does not simply inform the techniker."

City of Hamilton (likely) response: "Your attitude has been noticed."

This city is Broken:

I would think the city should respond within the 72 hours in acts of Vandalism, to coincide with with their Graffiti awareness. The response time to graffiti on city property is 72 hours according to the website: http://www.hamilton.ca/ProjectsInitiativ...

The City’s Role is to: Receive, track and coordinate graffiti complaints.Remove graffiti from City property. New service standard is removal within 72 hours of reporting.

Since graffiti and vandalism, in a lot of cases go hand in hand, this kind of vandalism should also be included within 72 hours.

A lot of things can be taken from this one piece of glass.

Not only does it look bad for the city, but in general business for the city over all. It may be only a single piece of broken glass, but as it lays there unattended for a prolong period of time, but it's also it's chances of injuring someone, which could include unnecessary litigation costs, lawsuits and whatever else someone could find.

Even a simple clean up to ensure the area is safe would be ideal to start once it's been reported.

Unless of course the city's maintenance vehicles are unfit for the road, but that's a complete different issue.

There is no way you are going to get many people out of their cars to stand ankle deep in broken glass and cigarette butts, next to an overflowing garbage with dumped household bags next to it looking at a graffiti'd and spit covered shelter.

That's what you get when you take the HSR east of Wellington.

That's what you get when your public works and other associated companies don't look after their work areas.

I see that scene you've described, or any number of similar ones in our city and also in Mississauga. There's this one really busy stop at Dixie and Eglington, and it has had all manner of garbage left inside and around it - coffee cups, cigarette butts, liquor bottles (some broken), food wrappers, full bags of household trash, construction materials, even a broken baby carriage! It gets cleaned up weekly, or sometimes longer. It's a problem across the province - not just in Hamilton.

But, I don't want to compare with other city's because then it becomes the norm. It's about time for Hamilton to become better than the rest.

But you need to baseline. If you don't, you will always be an outlier.

Accident at our corner had the big bald guy who ran the stop sign calling the little old lady every name under the sun. Shows the class of car drivers.

He got really quiet, really when my neighbour who was working out front walked over and told him he witnessed him not stopping at the stop sign. One classy car driver.

Hey, give the city a break the guy who works the shovel and pail is on vacation this week.

And if anyone else picks up a shovel,that's a union grievance.

Well you know he's the only on with the proper safety training to work the shovel and pail for cleaning up glass.

I want to see the training regiment needed to qualify for the one position on every job that involves standing on the side of the road playing around on a smart phone. Must be gruelling.

Only one? Where's that?

That's the training segment on not using a smartphone while driving.

My anger about this doesn't so much stem from the glass being broken. It's the absolute inaction in cleaning it up. There is a broken rum bottle in the rubble which I assume is the culprit. The liability the City is open to is infuriating and the property standards double standard drives me nuts.

We need to put REAL pressure on councillors. I mean rotting outside their doorstep. We pay for their sustenance. We need to demand better or fire them. There NEEDS to be accountability.

Why not just occupy their offices at City Hall? It worked for the Ontario Federation of Labour and MPP offices. 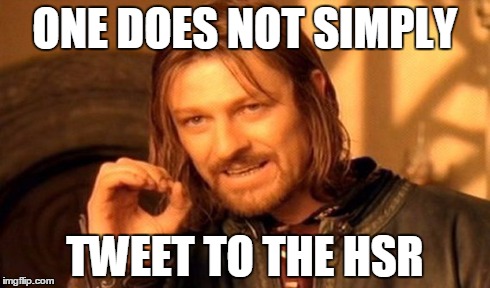 Lol, bus shelters are a city issue, and yet the HSR has their logo slathered all over the bus shelters. Makes no sense to me.

Actually... CBS outdoor who owns the ad rights to shelters is also responsible for maintenance and repair. So I imagine the complaint takes several days to even get to them, and their motivation to do something about it is probably low.

Not making excuses just clarifying the chain of command :-)

Is this really a priority issue when so many are homeless?

Yes, according to the Broken Windows Theory of policing (1982): https://www.britannica.com/EBchecked/top... It fixed up bankrupt New York.

Can the city only perform one task at a time?

Why don't they replace the windows with something that isn't burnable or made with glass?

Because that costs money. Guiding principle: "Hamilton, the city that really isn't worth it."

I drove by this shelter this morning and the broken glass was (mostly) removed and a new pane installed.