Not Quite Zero Tolerance: The Shove

Our society runs more smoothly when people have consequences to their actions and receive punishments, whether big or small, those that fit the crime. It's a deterrent and satisfies our innate sense of fairness.

You can't walk into a Hamilton facility without seeing those big "Zero Tolerance for Violence" signs. But talk, words and signs are cheap. We now know that a certain amount of violence is tolerated by the City of Hamilton. 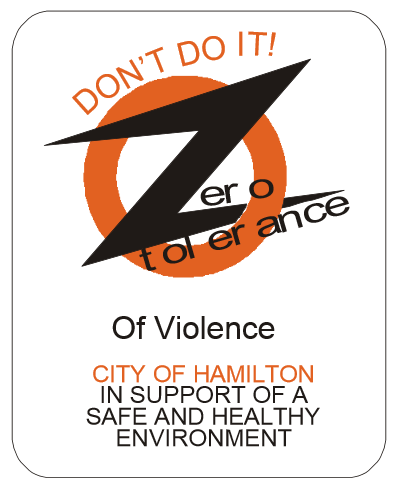 Sign: Don't Do It! Zero Tolerance of Violence, City of Hamilton

Whether you favour Ward 12 Councillor Lloyd Ferguson and are in the "cut the guy a break" corner, or whether you think independent journalist Joey Coleman deserves justice for being shoved, we can unite knowing there's some tolerating going on.

Around this time last year, Councillor Ferguson shoved Coleman about a metre's length because he felt Coleman was infringing on his private conversation.

It was a year before the city's Integrity Commissioner, Earl Basse, submitted a report [PDF] on the incident. Basse decided that Ferguson violated the Council Code of Conduct [PDF] but he didn't recommend any punitive steps.

"Zero" punitive measures, you might say. The public then pressured council to seek justice and good on them.

The shove apologists have claimed the two forgave each other and that settled the matter. It's true that Ferguson apologized to Coleman and he accepted it. However, forgiveness shouldn't be equated with justice.

Our society runs more smoothly when people have consequences to their actions and receive punishments, whether big or small, those that fit the crime. It's a deterrent and satisfies our innate sense of fairness.

It's much easier to make peace when we feel treated fairly. The fact is, shoving is deliberate and those who are violent in any way weigh it against the power and rank of their victims.

Later, after public pressure, Ferguson self-sanctioned himself, promising to donate $1,000 to an Ancaster charity and stepping down from the hiring committee for the new integrity commissioner. But who can feel gratified with the offender choosing his punishment?

The shove is now being investigated by the Ontario Provincial Police. It's an unfortunate step and some might see this as another example of our leanings toward a more litigious, hypersensitive culture.

But the problem is the alternative: going through the workplace with its inept and biased decisions. There's no taking the politics out of the workplace and especially out of Council chambers. The bottom line is that we can't count on our employers to do the right thing.

Workplaces craft policies that sound great but flop in practise. Canadian sites that discourage workplace violence and bullying have loads of preventative measures but little information for what to do when it occurs.

Integrity Commissioners are given a job title so lofty they're doomed to fail, as ours did - without interviewing Coleman or witnesses, the process nosedived.

Those who think it's not a big deal should consider this: entry level employees would have been dismissed immediately. The City has condoned unwanted touching, whether it is violent or lecherous.

Those who are experiencing harassment right now will hesitate to come forward. Those who practice self-restraint and respect policies and flashy signs, as Coleman did, are treated as troublemakers.

I'm not sure what an equitable punishment should be, but Ferguson shouldn't decide it. I trust the OPP will work it out.

My support is with Coleman, as it would be with Ferguson if the situation was reversed. But it's time for a math lesson at City Council. Zero tolerance means nil, nada, zip, zilch. It means no tolerance whatsoever for shoving. This is a code of conduct failure.

So much for all that fancy signage.

This article was first published on Elizabeth King's website.

Elizabeth King is a writer in Hamilton.

I'll be happy when this normally fantastic blog tires of flogging this particular dead horse and returns to substantive policy issue discussions.

Oh good, the report that took 9 months to write and didn't bother to interview the victim or any of the witnesses or offer any analysis or consider any alternatives doesn't use the word "shove", I guess that settles it. I for one have never been grabbed and then shoved and can't imagine how that might be possible, let's all stop making such a big deal over a councilor assaulting a journalist inside city hall on the way to a public meeting.

What does zero tolerance mean? Is there anyone who is tolerating this? There have been apologies which are acknowledgements of fault. There has been forgiveness as in "I accept your apology as enough." The private individual most concerned is not demanding more. That does not mean he has tolerated it. He has accepted the apology. The police have the information and they are not investigating it likely because of the de minimis nature of the event. That does not mean they are tolerating it. It just means they see no role for themselves in this.

For every wrong there is a remedy. But the remedy must be proportionate to the wrong. No one is tolerating this.

If a staffer shoved someone they'd be fired, apology or no apology.

Maybe a management employee but certainly not a union employee. Blatant serious crimes ave been committed by Hamilton employees, even police officers, and it is nearly impossible to get rid of them.

I thought Joey had accepted the apology and it was two uninvolved "activists" that made the complaint? Not sure why everyone else had to have an opinion when it was resolved by the people involved and who why the author thinks Joey wants some other justice. Now as to the report quality and Joeys complaint that it impugned him is another story entirely that should allow Joey to appeal and if successful, have that silly report struck from the public record and a public apology from the council.

The learning point here IMHO is to eliminate the impractical zero tolerance policy for city employees and let supervisors judge each case on its merits with an appeal system if "victims" are now happy with decision. It should be an employment law issue, not a politically correct morality policy.

I highly doubt it. Ever tried to fire an unionized civic employee in Hamilton?

"...full of sound and fury, signifying nothing."

All of this has been, by turns, amusing, bewildering, frustrating...and revelatory.

For the sake of argument, this 'What if?': What if the general regard for Councillors was the opposite of what it actually is? What if we lived in an alternate Hamilton, where we were really chuffed at what Council had accomplished? Where the effort towards LRT had been 'Waterloo'd', where heritage had been protected while great development had been fostered, where vision combined with conviction and fueled by endurance had resulted in a Hamilton where we don't get tied up in the minutiae such as the city's motto, but instead are all committed to a great Hamilton? How would we view the Ferguson/Coleman incident?

For me: a) Councillor Ferguson shouldn't have done what he did. Was it an 'assault'? No. b) Did Mr. Basse execute his duties within reasonable expectations of performance? No. c) Has all of this been blown completely and utterly out of proportion, revealing not only how much City Hall falls short, but its vocal residents? Yup.

You want an example of behaviour that other cities have a right to mock? Here ya go.