The report on Councillor Ferguson's assault tells the public that legitimate complaints about abuse of power will not be taken seriously.

I write in regards to the Integrity Commissioner's report respecting the incident at City Hall between journalist Joey Coleman and Councillor Lloyd Ferguson. After reading the report, I find it completely unacceptable, and I think that integrity commissioner Earl Basse should resign immediately. 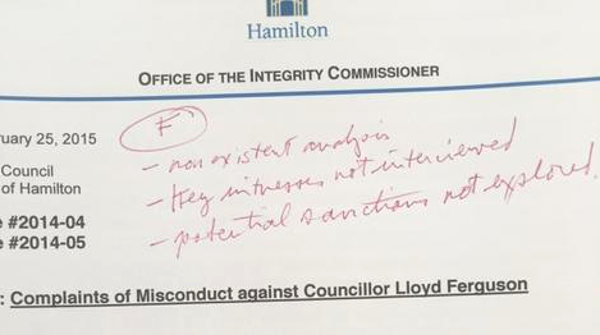 The report shows clear signs of bias, which calls into question the integrity of his entire office and due process at City Hall.

To be blunt, the report reads like a rape apology. In the same way that it is inappropriate to ask women who reports rape "what she was wearing" and "how much she was drinking", Mr. Coleman's history at City Hall, what Mr. Ferguson assumed his intentions were and the amount of time he waited to file his complaint should have no bearing on its legitimacy.

In the same way, the idea that Councilllor Ferguson's "long and contentious day" in any way mitigates the seriousness of the accusations are farcical.

While I can understand that these are the kinds of contextual details that might come out over the course of an investigation, their inclusion in the report as relevant details in the context of the complaint is alarming.

In the words of Andrew Dreschel in today's Spectator column, their inclusion "adds a disquieting bias to the findings."

Furthermore, I find it unsettling that Mr. Basse did not choose to interview either Joey Coleman, the alleged victim, or former Councillor Brad Clark, who also witnessed the event.

Privileging Councillor Ferguson's version of the narrative over the alleged victim reeks of "old boys" politicking, where those in power are able to circumvent due process by appealing to friends in high places.

It creates the appearance of collusion, which, particularly as it is coming from of the Integrity Commissioner's office, undermines public trust.

Council Should Not Have Accepted Report

Finally, I would also like to express my disappointment in Council's acceptance of this report, with the exception of Councillors Matthew Green and Scott Duvall. This was clearly a biased and fundamentally flawed report and should never have been accepted as the final word on this incident.

Even a very cursory read of it should have indicated that to council members. By voting to accept the report, council affirmed that the investigation represents acceptable due process in our city. As a citizen, I find this both unacceptable and disappointing.

Personally, my concern in this matter is less about what the appropriate consequences should be for Councillor Ferguson in this particular incident (not to say that their shouldn't be consequences, but that I don't feel equipped to comment on what they should be), but what the process surrounding this incident indicates about the checks and balances we have in place at City Hall.

Loss of Faith in Fair Process

A properly functioning and healthy democracy must ensure that if and when those in positions of power act inappropriately, there are legitimate and trustworthy channels available to the public to deal with the issue in a fair and unbiased way.

Based on this incident, the public has no reason to have faith in these official channels. This report and its ratification by Council will discourage others from coming forward in the future to report abuses.

What a sad state of affairs. Shame on you, Hamilton City Council.

Adrienne Havercroft is a Ward 3 resident, HWDSB teacher, licensed Realtor, wife, and mother to two humans and two cats, taking time out of her busy schedule to be an actively engaged citizen.

This type of action from our city leaders makes me sad and worried. M. Green and S. Duvall, I see you, #respect.

Hamilton is run by a bunch of evil reckless tyrants, its organized crime. The few good councilors are just smoke and mirrors.

By covering up for a colleague this council is running the risk of losing the moral authority to lead. Trust is earned.

I gave up on the IC year's ago. He's been slow and ineffectual.

Also, correct me if I'm wrong, but I believe that Ferguson sat (sits) on the committee that overseas and renews the IC's contract. How's that for a conflict of interest...

You are not wrong. He does in fact sit on that committee.

Ontario ombudsman's office is a joke. Where was there oversight on a million other scandals (e.g. King St. TOL, Orange, gas plants, etc. etc.)?! Another approach with no teeth.

Sad state of affairs at City Hall these days ... you just can't make this stuff up. It's beyond an embarrassment. It's corrosive to the public trust. Glad to have the provincial Ombudsman weight in on the obvious problem with this IC report. This isn't the first IC report in recent years to raise eyebrows.

Yeah but what was Joey wearing that night? His chest does look very push-able in a knit sweater.

I see from the Spec:

Basse has said he didn't need to interview Coleman because the journalist described the incident in a blog.

Really? Seriously? That's your reason for not investigating? That is just so amateurish.

Are you kidding me?! That's like saying "I didn't need to confirm that bat boy exists, because his picture is on the front page of national inquirer"

Nice to know the majority of councillors agree with the idea that something written in a blog is irrefutable evidence!

Seems as though some Councillors might be listening, and committed to "righting the wrong". Restez à l'écoute.

unirregardless of the universe, LOL-ALL-OVER-AGAIN isn't captain of it yet!!! fake words FTW!

"municipalities... (have) been beyond the scrutiny of the Ontario Ombudsman since the office was created in 1975."

Yeah, informally surveying your constituents IS just as bad as assaulting someone. :P

In the report, Basse determined Ferguson had violated council's code of conduct when he pushed independent journalist Joey Coleman.

Merulla calls it "outrageous" that the integrity commissioner didn't recommend sanctions against Ferguson.

He'd also like a "third party police service such as the Ontario Provincial Police" to investigate the matter.

"Anyone that admits assault I don't think is deserving of being on the police board," Merulla said Sunday, referring to Ferguson's apology the day after the incident.

Merulla is playing politics to get his choice, Chad Collins on the Police Services Board.

This is clearly what is happening as Merulla hasn't issued a notice of motion for have Ferguson removed from the Governance Review sub-Committee which chooses the Integrity Commissioner.

I guess the Governance Review sub-Committee is as in-demand, or important, as the Police Services Board.