Integrity Report on Councillor's Assault a Sad Day for Hamilton

Council voted to accept the report finding that Councillor Ferguson violated the Council Code of Conduct by assaulting a journalist, despite the fact that it recommended no reprecussions.

Yesterday was a sad day for the citizens of Hamilton, and today is even sadder. 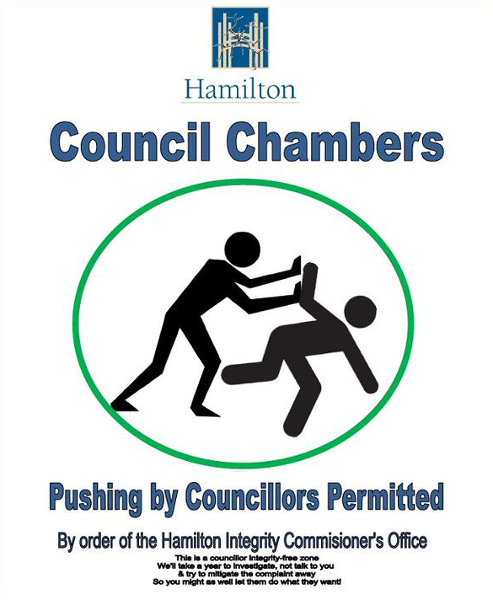 With the exception of Councillors Matthew Green and Scott Duvall, our Mayor and Council voted to accept the report from Integrity Commissioner Earl Basse on the incident in which Councillor Lloyd Ferguson grabbed and shoved journalist Joey Coleman

This is despite the fact that the report found Councillor Ferguson guilty of breaking Council's Code of Conduct but recommended no repercussions.

Notwithstanding that it was a long and contentious day of meetings from 8:20 am until 10:45 pm, Councillor Ferguson should not have made physical contact with Mr. Coleman and as a result Councillor Ferguson is in violation of Section 45 (a) and (b) of the Code of Conduct.

Our council is willing to accept Ferguson's behaviour because he had a bad day.

Assault is assault. Many parents have been banned from organized sports events for these kinds of actions. Husbands, wives, boyfriends and girlfriends are held accountable. They do not get forgiven because they apologize, they pay the price for their actions.

Then, to add insult to injury, we find out Ferguson is on the committee to hire the new Integrity Commissioner.

Someone, please help me understand what message Council is trying to send to the citizens of this great city.

This article is adapted from a letter to Council.

The message is simply - "we don't care...because the people of Hamilton apparently don't either"

was ferguson allowed to vote too?

It's what we get when over site is controlled by those being overseen.Especially where political leaders are in virtually for life and in Ferguson's case all but inherited!

"Mind your place" is the message.

Basse has been a lame duck for years.

He should have included a recommended sanction in his report. That said, I believe that Ferguson is on the committee that recommends Basse's ongoing employ. Is that still correct?

We NEED to step up protest from writing to showing up, being in their faces so they feel the pressure.

If Coleman had handled Ferguson in such a manner, he would have been banned from city hall, effectively ending his career.

Forgive him, and move on. Simple.

Who the Integrity Commission, Ferguson or both? Inappropriate actions without consequences is pretty scary world.

For the record, Joey stated last year that he accepted the councillor's apology and considered the matter closed. The complaints that led to the investigation were made by other citizens.

Yes, you're right that Joey Coleman did accept Lloyd's apology. However, he accepted it on a personal level, not on behalf of all the citizens of Hamilton. What Lloyd and other bullies do on council is bad for our entire city, so I thank those "other citizens" who made the effort to speak up for all of us. When bullies rule, bad decisions get made.

That doesn't erase the fact the Code of Conduct was violated.

Why do so many people think saying 'Sorry' gets people off scott free?

It is not relevant that Joey Coleman accepted the apology.

As another poster pointed out if Coleman had shoved Ferguson his career would have been effectively over. If he had expressed reluctance to accept the apology how would that have affected his career?

I suspect with the "blue wall of silence" kind of solidarity in council there may have been repercussions.

In the work place there are protections against this kind of abuse and any organization that fails to take violations seriously will pay for the mistake. This is the equivalent of a workplace assault perpetrated by an individual with authority or influence on the career of the victim.

This Integrity Commissioner is a pathetic joke. Much like in policing or medicine when any profession is in charge of investigating itself the outcome is seldom ever credible.

So I'm clear here, the Mayor is willing to "die on the hill" over the NPCA issue, but rolls over on the Code of Conduct on of all days Pink Shirt day by accepting this joke of a report in council? Fred, once again proving his (lack of) leadership!

The staggering irony of this event is such evidence of this wee town's ability to rise to new levels of #wtf. In Canada is illegal to assault anyone, regardless of consent. One cannot give consent to be assaulted This is in place to protect those who are unable to speak out do extreme power differentials.

There is an extreme power differential between a long standing developer/councilor who is on the police board pushing a citizen journalist who has no legal department to assist him, no union to get him rehired, no resources to go to court. It is a sad precedent.

The fact that this report fails to even sanction the abuser on "Pink Shirt Day" to end bullying is the kind of wrought irony that only the city of steel can achieve. Those who are opposed to this behaviour are labeled dissident, activist, unemployed, and single (frankly not a goddamned thing wrong with any of those things).

Before you despair entirely. Please read Andre Marin's assessment of the quality of the report. It is reassuring to know that executive level professionals are equally dismayed by this report.

This is bad, bad news.

Whether you love or hate Coleman (I like the guy), he does a great job with limited resources and is probably the best media "outlet" available. CH News and The Spec really are poor products made even worse through aggregation - scattered news casts, poorly written pieces, all lumped together into a poor piece of daily journalism.

It almost pains me to say this, but honestly, we need RTH and Coleman to have free reign as outlets for varying opinions - and treating him like a blusterous guy with a camera isn't fair.

Power to ya, Coleman - and to you RTH - make this a bigger deal than it is, it's a spotlight well deserved.