While I was fairly familiar with the research into the causes and effects of poverty, Linda Tirado's narrative brought the day to day reality into stark relief.

One of my favorite gifts over the holidays was Linda Tirado's book Hand to Mouth: Living in Bootstrap America. I had been following the frequent and widely shared excerpts from the book on social media, but was keen on a deeper dive. 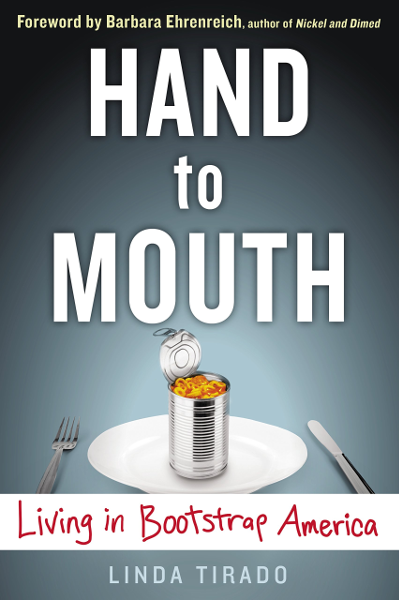 The book was at once a reinforcement of things I knew about American poverty from authors like Barbara Ehrenreich, and from living in Reno, Nevada, and a challenge to my middle-class, left-of-centre ideas about what drives poverty and how to fix it.

Hand to Mouth is a work that expands on Tirado's original remarks on an online article about what it was really like to live poor, which was picked up by Huffington Post and Forbes and is reprinted in the book.

It explains how much of poverty is not actually the result of "bad choices" but more about which family you were born into and the constant exhaustion and uncertainly caused by poverty itself.

After beginning with the original comment, Tirado goes into eye-opening detail about the major facets of her experience being poor, stressing throughout that this is her experience. She suspects that these are common experiences if not universal, but she's not going to claim to speak for anyone else.

In her chapter on work, she explains why members of what she calls the "service class" are often grumpy and unpleasant. She describes the reality of an unpredictable schedule, working multiple part-time minimum-wage jobs, and the constant pressure from supervisors to meet standards that she feels are either impossible or completely unreasonable considering the low pay and lack of benefits or security.

Transportation comes up frequently, whether it's trying to nurse a barely-working vehicle through to the next paycheque, or having to walk miles to and from a part-time job, with a few hours to collapse exhausted on the couch at home before walking miles to and from her second part-time shift that day.

Indeed, the overarching theme of the entire book is that people who live in grinding poverty are always tired. This feeds into why she has so much trouble planning ahead. The energy and clarity of thought required to plan is just not possible with the type of schedule she keeps, not to mention the constant worry about how she's going to eat, or what's going to go wrong next.

Living for a few years in Reno, I saw much of this firsthand, even long before the crash of 2008. I remember my first exposure meeting people who lived in long-term-stay motels, and the glaring inequality of such conditions against the sprawling ranches of the casino owners.

Our experience living there was summed up during one evening shift my partner was working, volunteering at a distress line. During a particularly difficult call, she turned to her colleagues to ask if various services she took for granted in Canada were available in Reno. Finally, in frustration, another volunteer told her, "Shut up about your Canadian social safety net!"

I didn't think that Tirado's experience had much relevance in Canada until the end of December. I had been approached about a job with a social service agency in Hamilton, and part of preparing for the interview involved researching income and standards of living in the Beasley neighbourhood.

I turned to a source I had admittedly not paid very close attention to before, The Spectator's Code Red stories, and began to unpack the data.

There I found that the median income for a single adult in that neighbourhood was in the $15,000 per year range: roughly the equivalent of a part-time minimum wage job.

Knowing what was happening to housing costs in Hamilton, I found myself thinking more and more that Tirado's experience may not be so foreign to people living just a few kilometers from me.

That was the first shock to my middle-class Canadian sensibilities. The second was Tirado's unashamed praise of the payday loan industry.

In Canada, well-meaning progressives like me love to hate a business model we view as predatory and exploitative. Tirado may not disagree, but she says such operations fill a gap that banks are unwilling to.

The author explains that she won't keep her money in a bank. If she cashes her cheque every week, there's no risk of a debt collector getting it. She's also unwilling to pay banking fees and insists that she'll never have the minimum balance required to earn interest.

Finally, she writes that payday loan companies are there in an emergency when banks refuse to be.

Someone living in extreme poverty would never qualify for a loan, a line of credit and often not even a credit card. So when things go wrong, in her case often with the vehicles she needs to get to work as a result of having to live in areas with poor transit, payday loan companies come to her rescue.

Admittedly, they do so for a usurious fee, especially as most people who use these services roll their loans over for multiple weeks. But if something goes wrong that would cost her a job or a home, what choice does she have?

I have been beating the drum on RTH and elsewhere for a long time that facts and figures will never get people to change their minds in the way a good narrative can.

So while I was fairly familiar with the research into the causes and effects of poverty, Tirado's narrative brought the day to day reality into stark relief.

If you don't mind the salty language and are open to coming face-to-face with someone living in circumstances more difficult than you may have thought possible in a country with so much, I would recommend picking up a copy of Hand to Mouth at a locally-owned bookstore near you.

Jason, thanks for this recommended reading. I appreciate it. I'm going to forward the section on pay-day loans to my church. Peace.

I read Nickel and Dimed some time ago. Thanks for pointing this book out. And yes, up-close narratives like this are needed to make problems something we can relate to in a human way.

Postal banking is a solution to the payday loans problem. The Canadian Union of Postal workers is urging the Post Office to get into that business, with not much success as far as I know.

There is a detailed discussion of postal banking prepared by the U.S. service on the net. Search on the title "Providing Non-Bank Financial Services for the Underserved."

On the subject of narrative accounts helping understanding, I recently read "A Week of This", a novel by Nathan Whitlock that really brings home how precarious much work has become. It is set in a small town somewhere just north of Toronto and follows four characters over a week. The central figure, Manda, has a crap job in a call centre; when she is not there she is trying to be a sort of sister-Mom to her brother and half-brother, which we come to understand is one of the many consequences of their parents' break up when they were children. It's interesting and convincing and shows people struggling in the vacuum that remains when there is no community but the family, and even that is half-broken. Pretty good book.

Why don't the rich hire mercenaries to protect their assets overseas? They wont have so much money left over and we wont have to make so many sacrifices . And that keeps their hands out of OUR pockets. Thanks, http://creditspoint.com/