Bus Lane a Small Step Toward the City's Vision

Council's role is to represent everyone's needs, plan for the future and carry out its approved vision.

I am a resident and taxpayer in Hamilton, and I live along the King West transit-lane route. I support maintaining our only transit lane, along with the simple fixes outlined by staff to bring parking back to the north curb west of Bay, and signal timing adjustments/transit signals at James Street to allow for easier car movement with buses not needing to clog the car lanes while turning left. 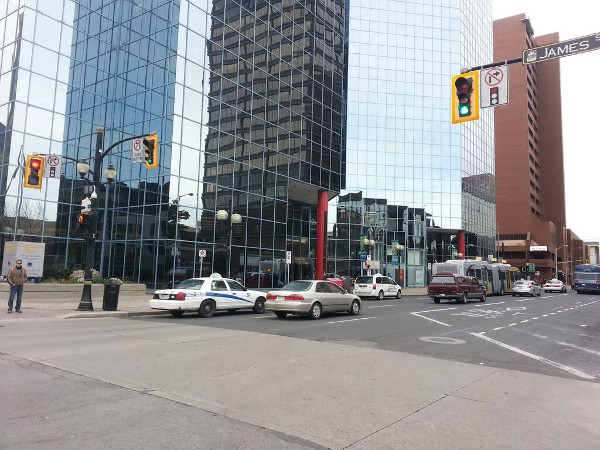 This is a win-win situation, especially in light of the fact that the money for these simple fixes is available in the Metrolinx Quick Wins budget for this project.

A few main points stand out to me:

Represent Everyone, Not Just Drivers

This one transit lane carries as many passengers as the rest of King Street combined, and probably more if GO Transit numbers are also included.

I know the majority of Councillors ran for office to move the city forward and provide a high quality of life for all Hamiltonians, regardless of income level. Surely being the "best place to a raise a child" applies to all families, even those who can't afford to own a car.

To think a city our size only has a single two-kilometre long transit lane in 2015 shows how completely car-dependent our planning has been.

Plan for the Future

I've heard one or two comments from city hall that "we don't need transit lanes yet" because we don't yet have a Toronto-style traffic crisis. Add 100,000 new residents to Hamilton and we will. When that day comes, am I expected to believe that residents will be thrilled with the idea of giving car lanes over to transit?

David Dixon, our new transit director, is a breath of fresh air, and is absolutely correct when he states we will need many more transit lanes in Hamilton, and would see even greater results on the B-Line with transit lanes the length of the route.

As was predicted during the recent election, those who said they supported bus rapid transit (BRT) instead of light rail transit (LRT) really don't support any transit improvement at all.

We had no gridlock or traffic mayhem when council pushed forward with the Linc/RHVP. Council supported those highways because it was planning for the future. It is no different with transit.

Please remember, transit riders live and work in every urban ward and neighbourhood in this city. City Hall should represent their daily needs just as much as car owners - if not more, considering the much lower strain they place on our rapidly growing infrastructure deficit.

As a resident and taxpayer, I am simply asking my elected officials to honour their own stated goals and mandates. Here are excerpts from the city's planning documents:

I live in Hamilton and believe in our city's potential. Again, as a resident, I'm only asking that city council support its own stated goals and planning documents.

The rest of the province is fighting hard for their fair share of transit funding from the Ontario government. I would like my representatives to do the same.

This article is adapted from a letter to Council