Etamadi inhabits Leila's character with such dedication, fluency and infectious charm that the audience can't help but be smitten with her naive self-confidence and her stumbles over the bizarre gotchas of Western culture. 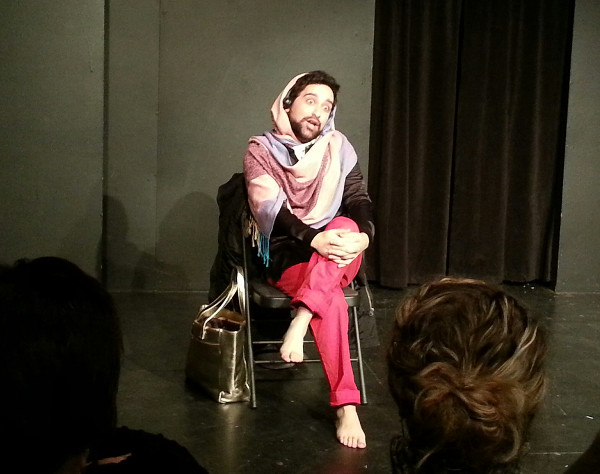 In 2013, Izad Etamadi caught our attention with his award-winning one-person play Borderland, a moving story about a young gay man growing up in Iran.

Last summer, Etamadi reprised one of the characters from that play to star in Love With Leila, a sweet and hilarious coming-of-age tale of a young Iranian woman falling in love for the first time. As Anne Bokma noted in her enthusiastic RTH review, Etamadi "inhabits her character so completely that it's easy to look past his beard."

At the end of the performance, Etamadi promised the audience that Leila would return to the stage for a Christmas story, and Leila has delivered in spades. A Very Leila Christmas is a delight: uproariously funny, infectiously upbeat and irresistably compelling.

Leila immigrates to Canada, moves to an overpriced apartment on Barton Street, takes a call centre job in customer service and sets out to learn about this Christmas thing Canadians seem to love so much. She swoons over a cute man in the call centre (played under duress by a good-natured audience member), agonizes over crappy HSR service and struggles to understand the rules and mores of Christmas.

An awkward attempt to chat up her boyfriend - "he just doesn't know it yet" - ends with Leila promising to throw a Christmas party, without any idea what that entails. (As part of her research, she watches a must-see list of movies that somehow includes Schindler's List.)

Leila has the epiphany that the holiday is built around "the Jesus Christ of Christmas - Santa!" and much hilarity ensues. Comparing Christmas to her own religious tradition, Leila calls Ramadan "the original Hunger Games."

Etamadi inhabits Leila's character with such dedication, fluency and infectious charm that the audience can't help but be smitten with her naive self-confidence and her stumbles over the bizarre gotchas of Western culture.

It was the kind of play where the audience emerges with sore cheeks and puffy eyes from laughing so hard and so often. One of my favourite bits was Leila's musical take on The 12 Days Of Christmas, a spirited list which included such treats as seven twerking lessons and five seasons of Real Housewives of Vancouver.

We attended Friday's performance at a packed Staircase Theatre, in which Leila was supported on stage by the talented Two Juliets, who delighted Hamilton Fringe audiences last summer with their performance XOXO: The Relationship Show (you can read RTH reviews here and here). 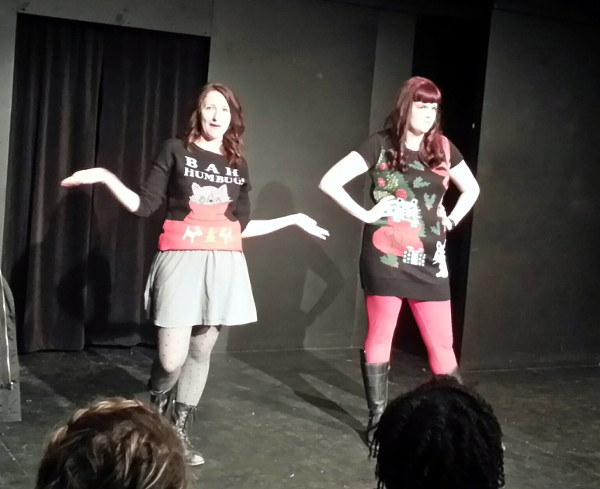 The Juliets did a lovely job accompanying Leila on her journey, engaging the audience with songs and humour and helping steer Leila straight when she misunderstood the meaning of Christmas to tragicomic effect in the second act.

There were three performances altogether from December 17-19, and the other two nights included musical accompaniment by Lyla Miklos and Sheena Campbell, respectively.

Etamadi has more in store for Leila, and I can't encourage you strongly enough to get out and see her the next time she makes an appearance on stage.

It was a delightful and engaging. When Leila comes to town again, we will definitely be attending.